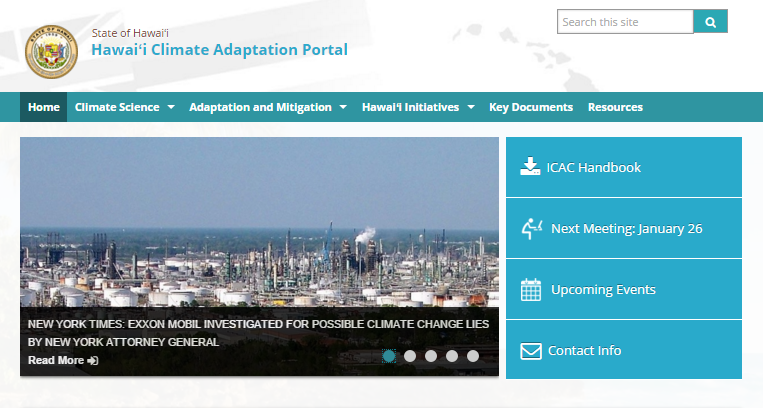 (HONOLULU) – The DLNR introduces the Hawai‘i Climate Adaptation Portal, a website which includes a vast wealth information on climate change and how it is impacting Hawaii and other coastal states and locations around the world as well as all things related to the Interagency Climate Adaptation Committee (ICAC). The Hawaiian name for the site is Pili Na Mea a Pau, which translated means, “all things are related.”  Sam Lemmo, the administrator of the DLNR Office of Conservation and Coastal Lands and Co-chair of the ICAC said, “The impacts of climate change are far reaching and will have dramatic effects on Hawaii’s economy, health, environment and way of life. These impacts are all related and it’s important that we consider them all as we prepare adaptation strategies.”

Last year the Hawaii State Legislature passed Act 83, the Hawaii Climate Adaptation Initiative, which then established the ICAC.  The ICAC is administered by DLNR and co-chaired by the Board of Land and Natural Resources (BLNR), and Lemmo was designated by BLNR Chair Suzanne Case to co-chair the group along with the director of the Hawaii Office of Planning (OP).  The ICAC includes representatives from all the counties, as well as from numerous other state agencies.  Its first task is to develop a statewide Sea Level Rise Vulnerability and Adaptation Report (SLR Report) by the end of 2017.  The committee has held two meetings, with a third scheduled early next year.  Additionally DLNR and OP, along with their partners the University of Hawai‘i School of Ocean and Earth Science and Technology (SOEST) and the University of Hawaii Sea Grant College Program are planning a sea level rise vulnerability and adaptation workshop for February 2016.

The Hawaii Climate Adaptation Portal includes a top-story rotator, which features the latest climate change news from around the country and the world.  Featured tabs are; climate science, adaptation and mitigation, Hawaii initiatives, key documents, resources, upcoming events, and the ICAC Handbook.  “As we continue work toward the development of the SLR Report over the next two years, the website will be continuously updated with the latest information and updates on the ICAC’s work.  We encourage everyone in Hawaii to use the resources on the site, as climate change and especially sea level rise will impact us all in multiple ways in the coming years and decades,” Lemmo concluded.