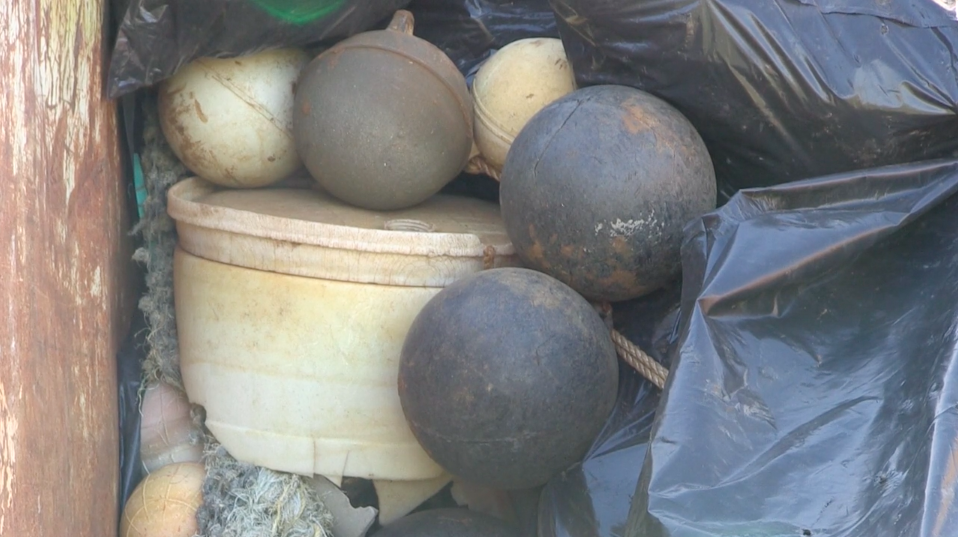 (KIHEI, MAUI) – Today, a group of volunteers returned from Kanapou, Kaho’olawe after spending the last four days removing marine debris from the shores of the protected and culturally significant island.  This project was funded by the Department of Land and Natural Resources’  “Japan Goodwill Fund.” In 2013 the State of Hawaii received $250,000 as part of an initial partial distribution of a $5 million gift to the United States by the Government of Japan to help the Pacific Coast States (AK, WA, OR, CA & HI) address marine debris associated with the massive 2011 Tōhoku earthquake and tsunami. For this week’s project, an estimated 1.5 tons was collected by the volunteers and removed by helicopter airlift from Kahoolawe to Maui for disposal. Some materials were kept on island for use in erosion control projects.

Michael Nahoopii, Executive Director of the Kaho’olawe Island Reserve Commission (KIRC) said, “The volunteers have done an outstanding job cleaning up our coastal ecosystem, by removing derelict fishing gear, nets, a huge variety of plastics and other debris.  Their work helps promote the health of a wide variety of marine species including several species of threatened or endangered animals.  Given the lack of state funding for this type of work, we’re in debt to Japan for providing the necessary financial resources to enable this effort.”

Similar cleanups have previously been conducted on Kaho’olawe with the help of federal funds.  In 2014, a grant from the National Oceanic & Atmospheric Administration (NOAA) allowed KIRC staff and volunteers to remove an estimated 10 tons of trash from ‘O’awawahie, Kanapou and Puhianenue beaches.

Kaho’olawe is a prime example of the continuing problem of marine debris that affects all shores in every ocean.  The tiny island is uninhabited except for a small number of staff and volunteers, yet its shores and near-shore waters continuously receive tons of debris.  Studies elsewhere have estimated the majority of Hawaii’s (and therefore Kahoolawe’s) marine debris is likely to have been locally generated from the main Hawaiian Islands, with the remainder originating from distant shores.

Suzanne Case, DLNR Chair, commented, “What happens on Kaho’olawe serves as a reminder to us all that anything that we don’t dispose of properly can and does wash into the ocean and onto our shorelines.  This is a human-caused problem that we can all address in our daily lives, by practicing a philosophy of reuse, recycle, and reduce.”

Since 2013, Hawaii and the other Pacific Coast States have used the Japan Gift Fund to support local marine debris activities relating to not only removal and disposal, but also for invasive species mitigation—particularly important for Hawaii’s marine ecosystem, as well as detection and monitoring efforts, and outreach communications. Though the actual origins of very few marine debris items can be confirmed, every effort has been made to try to trace items that appear to be Japanese in origin and bear identifying marks that might link them to the 2011 tsunami.  In Hawaii, since the first confirmed item arrived in September 2012, NOAA and DLNR, in cooperation with the Japanese Consulate, have so far compiled a short list of only 30 items, out of several hundred reported, that the Government of Japan has been able to confirm as originating from the 2011 tsunami.

In Hawaii, the bulk of DLNR’s marine debris removal and disposal activities have been and will continue to be absorbed by DLNR’s regular operations budget and has not been fully quantified.   However, DLNR acknowledges that it, or any other government agency, cannot singlehandedly address marine debris, so hopes the public will recognize and support all the good work done every year in the many beach cleanups across the state organized by numerous volunteer groups.  They are the ‘unsung heroes’ of everyday marine debris.