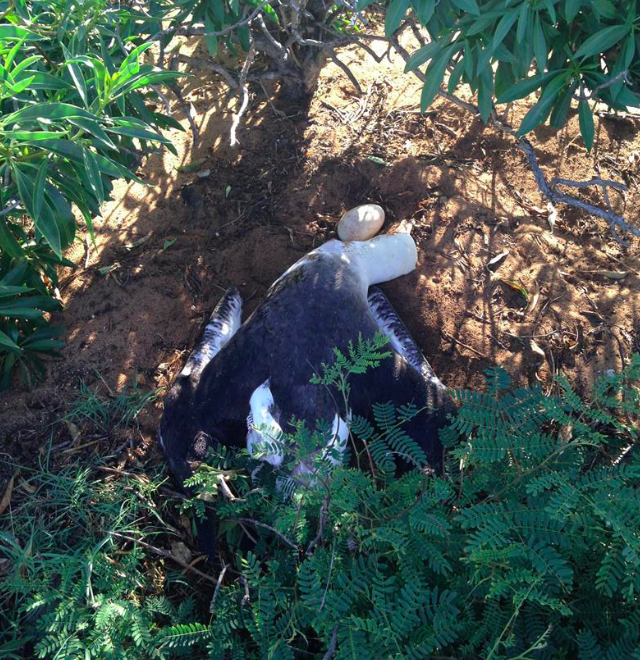 HONOLULU —  The Department of Land and Natural Resources (DLNR) is investigating the deaths of three Laysan albatross and numerous destroyed nests in the Ka‘ena Point Natural Area Reserve. Thanks to a report made by a concerned citizen on Monday, an officer from DLNR’s Division of Conservation and Resources Enforcement, accompanied by the natural area reserve manager, a natural area reserve specialist and a seabird biologist, conducted a site visit yesterday.

As of last week there were 75 active nests at Kaena.  A completed nest inventory yesterday revealed that there were a total of 15 nests that were destroyed with either smashed, dead, or missing eggs. Of these nests, 12 of the attending adults are missing and bodies of three adult birds were found. Seabird monitoring cameras and sound equipment are also missing with a replacement value of $3,100.

Normally in a nesting pair, one parent always stays on the nest to incubate the egg while the other forages – they never leave an unattended egg, so the fact that 12 nests were unattended by an adult is suspect.

DLNR is working with the U.S. Fish and Wildlife Service law enforcement office and Honolulu Police Department on the investigation.  The three adult carcasses were taken for necropsy to U.S. Geological Survey Honolulu office for a necropsy identify cause of death. This process is expected to take several weeks.

The Laysan albatross is listed as near threatened under the IUCN Red List, is a federally protected species under the Migratory Bird Treaty Act, and protected under state wildlife rules. They face a number of threats including by-catch in long-line fisheries, ingestion of plastics and predation by introduced mammals.  Kaena offers a high island nesting site that is safe from sea level rise, vitally important to a species facing impacts from global climate change. Kaena Point is the main albatross nesting site on Oahu and one of the best studied albatross colonies in the world as all of the individuals have been banded providing unique information on individual life histories.

Suzanne Case, DLNR director said, “DLNR, with the support of north shore and leeward coast communities, and recreational users of Kaena Point State Park, has devoted considerable time, care and action to improve the coastal sand dune habitat at Kaena Point Natural Area Reserve – including installation of a predator prevention fence in 2011 to keep out dogs and cats – and preserve a safe environment for seabirds to nest, and where people can view them from a safe distance. This is why seabird populations, such as the Laysan albatross, have been able to increase in recent years.”

“We ask the community to join with us to ensure safe and responsible conduct in both the state park and natural area reserve to protect our wildlife and dune environment, and to prevent any further recurrence of this disturbing violence,” she said.

Tommy Friel, DOCARE Chief, said “Not only is the loss of these adults a serious wildlife crime, but it will impact the future population of this colony as well.” DLNR is asking anyone who may have witnessed any persons or vehicles in the Kaena Point natural area reserve between Sunday evening Dec. 27 to Monday morning Dec. 28 to contact Division of Conservation and Resources Enforcement at 643-DLNR.  Federal penalties are up to $15,000 per incident and up to one year in prison while state penalties include fines up to $10,000 for the incident and up to $5,000 per animal harmed.

Wildlife organizations and concerned citizens across the state are saddened by this event and with the help of DLNR, are offering a $10,000 reward for the successful arrest and conviction of the person(s) responsible for this crime.

Laysan albatross nest primarily in Hawaii (99%) and are very loyal to their breeding areas.  They nest on the ground, making them particularly vulnerable to predation by dogs and cats. Female albatross only lay a single egg each year.  Adults can live more than 60 years.