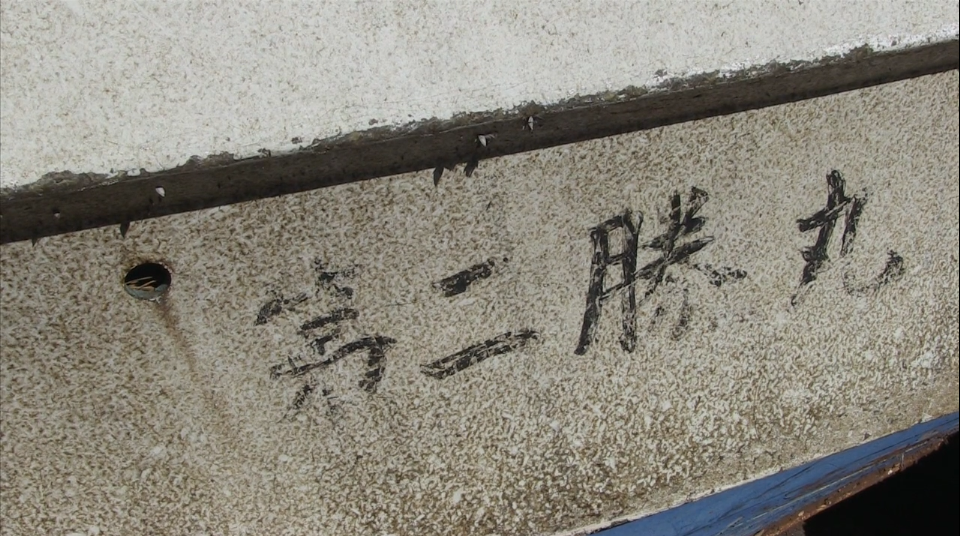 (HONOLULU) – The 20-foot long Daini Katsu Maru is one of the more than four dozen small fishing boats that have washed ashore in whole, or in part, in Hawaii following the devastating March 11, 2011 Japan earthquake and tsunami. This boat was adrift in the vast Pacific Ocean for more than four years before finally coming ashore at Alan Davis Beach on Oahu’s eastern shore on April 22, 2015.  Designated as JTMD (for “Japan tsunami marine debris”) it was confirmed as originating from Ogatsu-town, Miyagi Prefecture, during the 2011 tsunami using the identification on its hull through coordinated efforts by the Japan Consulate and the Government of Japan.

Today, a crew from the DLNR Division of Engineering, trucked the boat to a secured area at Pier 31 where it was loaded onto the Japanese training vessel, Miyagi Maru, owned by the Government of Miyagi Prefecture, for its return home.  The Captain of the Miyagi Maru, working with Honolulu-based Transmarine Navigation Corporation (shipping agent), agreed to take the Daini Katsu Maru back to Japan as an act of charity.

Once back home, the Daini Katsu Maru will become an integral part of a memorial display about the earthquake and tsunami at a local cultural center being planned by the newly formed Daini Katsu Maru Preservation Society. Kiyoshi Ito, a fisherman from Ogatsu-town, was the last registered owner who passed away 13 years ago, according to his daughter, Sanae Ito. When she first heard the boat had been found in Hawaii, she said, “I thought it could be a message from my father to “not forget the Earthquake”.”  The Ito family’s home and all of their belongings were washed away along with the rest of Ogatsu-town during the 2011 tsunami. Ms. Ito arranged for the return of the boat to Japan, saying, “I know he would be so happy to hear that his ship is coming back.”

The Miyagi-Maru’s stay in Honolulu coincides with her father’s birthday, February 22, and the day the Daini Katsu Maru is scheduled to return home via the Miyagi-Maru is March 11, 2016; the fifth anniversary of the tsunami that first set it adrift.  Because of these coincidences, Ms. Ito said, “I feel that my father is guiding his boat back.”

The path the Daini Katsu Maru followed to Hawaii is probably not unlike that of much of the large-sized JTMD that has washed ashore here since 2012, when the first confirmed JTMD item arrived. Senior Researcher Nikolai Maximenko of the International Pacific Research Center at the University of Hawaii, School of Ocean and Earth Sciences and Technology and his team have been tracing the paths of various types of JTMD for the past five years.

They use sophisticated modeling to predict surface currents and the effects of wind and wind waves on items adrift in the ocean.  In the case of the Daini Katsu Maru, Maximenko explained, “This boat did not move on a straight line, as evidenced by the length of time it took for it to wash ashore. Our modeling shows it drifted eastward for about two years, before getting caught up in the so-called North Pacific Garbage Patch (convergence zone). We then think it wandered there for a year or more, before currents sent it farther east and then on a southwestern trajectory toward Hawaii and where it was found on the east Oahu beach.”

Predictions of tsunami debris flow are important especially for marine navigational safety reasons. For example, only two of four very large floating boat docks that washed away from Port Misawa, Japan, during the 2011 tsunami have been found, one in Oregon, and one in Washington State. The whereabouts of the other two are currently unknown, though one of them was briefly sighted in waters north of Maui in late 2012, and Maximenko’s team plotted probable paths away from Hawaii based on location and conditions of its last reported sighting.  Maximenko says these floating structures could pose serious navigational hazards to all vessels at sea.

The Daini Katsu Maru is only the second JTMD item returned to Japan from Hawaii.  In July 2014, DLNR and the National Oceanic and Atmospheric Administration (NOAA) partnered with Hawaiian Airlines to return a large wooden sign to Tanohata Village in Iwate Prefecture.