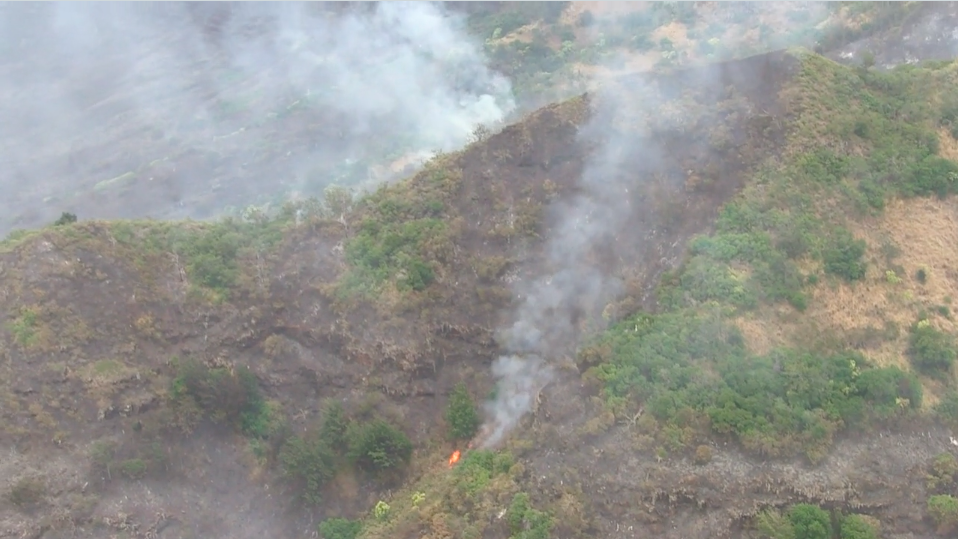 (HONOLULU) – One week after the 2,500 acre Nānākuli wildfire started, Susan Ching of the Plant Extinction Prevention Program and Marigold Zoll of the DLNR Division of Forestry and Wildlife venture deep into the burned area. They’re expecting the worst as they trudge across the now desolate landscape and toward the last nāʻū or Gardenia brighamii, growing in the wild on O‘ahu. Forest managers, conservationists, and cultural practitioners feared it had been killed by the intense heat and flames.

As they crest the top of a small ridge and cross over a small fence that surrounds the tree, Zoll and Ching breathe a partial sigh of relief.  While fire literally blackened the ground surrounding the enclosure, they immediately spot one branch with green leaves and several others with hanging fruit protected by plastic bags.  Much of the rest of this culturally significant tree is devoid of leaves.  Ching was brought to tears.  She along with many others, have tended this tree for years.  “On one hand we didn’t expect to find any greenery; on the other it’s sad to think that ultimately this tree may not survive because of the fire,” she said.

Ching climbed barefooted up the more than one-hundred-year-old tree to retrieve one of the fruit bags.  Opening it in her hand, she sees that one side of the walnut-sized fruit is charred.  When she opens it, she and Zoll are excited to see the deep orange hue, celebrated in native Hawaiian culture as representing a Nānākuli sunset. From inside she extracts two small, viable seeds; that along with others inside will be added to a seed bank to try and make sure this native species does not go extinct.

The wood of this species of gardenia was used traditionally as anvils for making kapa and as house posts. Its flowers were used for lei, and the fruit were used to make yellow dye. In 2001, there were three known plants in the wild on O‘ahu. Since then, one was killed by fire and another was killed by weeds, insects and drought. If the last O‘ahu tree survives, it will be one of only 16 wild individuals remaining statewide. All the others are on Lāna‘i.

The nāʻū (Hawaiian Gardenia) is one of numerous native plants and animals that conservationists and residents of Nānākuli believe were severely impacted by this fire.  They share deep concerns that increasingly frequent and severe wildfires, often exacerbated by drought, have and will continue to cause extinction of these rare, native plants and animals for future generations. Pauline Sato of the Mālama Learning Center, one of the many organizations and groups working to help protect the dryland forests of  the Nānākuli Valley  asks, “Will (future generations) ever know what some of these rare plants and animals, the heritage of the kupuna, look like in real life rather than in pictures? Will we regret that we did not work harder today to protect these natural and cultural resources?”

State and county firefighters believe the Nānākuli fire was one of the largest on O‘ahu in many years.  It scorched private and public land in the valley and as it burned into higher elevations into portions of the state Nānākuli Forest Reserve. With drought conditions predicted to get worse across the state as summer approaches, fire managers worry larger and hotter wildfires will continue to not only put people’s homes and lives at risk, but also will destroy critical members of Hawai’i’s natural and cultural heritage.

Other rare plants that were in the path of the fire are the mehamehame (Fluggea neowawraea), kulu‘i (Nototrichium humile), and ‘ahakea (Bobea sandwicensis). Fire is devastating to native plants and animals because a single one will change their habitat, making it impossible for them to recover in the long term. Fires also make the area more susceptible to the next one, especially where invasive grasses such as Guinea grass can quickly replace native vegetation. It grows fast and is able to withstand fire so it is often the first thing that recovers after one.

Native Hawaiian dryland and mesic (medium-wet) forests are among the rarest plant communities remaining in Hawai‘i. Nānākuli valley and ridges contain remnants of these forest types; home to native plants, animals, birds, insects, and snails. Some 60 rare and endangered plants and animals are located along the top of the ridgeline in the Palikea area of the Honouliuli Forest Reserve. These species include the Hawaiian tree snail, Achatinella mustelina, which is found only in the Wai‘anae Mountains.

Public and private groups have worked to protect the rarest species for more than 10 years. Seeds, cuttings, spores and other propagative material are collected from the field and taken to facilities for long-term storage, germination and propagation. The Plant Extinction Prevention Program works in tight partnership with the DOFAW Rare Plant Facilities, Lyon Arboretum Hawai‘i Rare Plant Program, and select botanical gardens, which have expertise in this field.

Others, like the Cultural Learning Center at Ka‘ala, have created native dryland kīpuka (an oasis within an expanse of non-native plants) in both Nānākuli and Wai‘anae valleys with the help of students and volunteers. They have outplanted dozens of dryland forest plants, some less common than others, and the plants have thrived. However, because this recent fire likely raged through part or all of the kīpuka in Nānākuli valley, it is heartbreaking to everyone who worked hard to create a refuge for native species that also served as an outdoor classroom.

Zoll and Ching and others conducted a follow-up assessment in the fire area on March 29th and will discuss their findings at a news conference the next day.  Zoll said, “It’s important for everyone to know that 99% of the wildfires in Hawai‘i are started by people.  We’re responsible for the loss of habitat and for careless actions like tossing a cigarette butt out the window.  We should take equal responsibility for doing everything possible to make sure that no plant or no animal is lost forever because of what we humans do.”