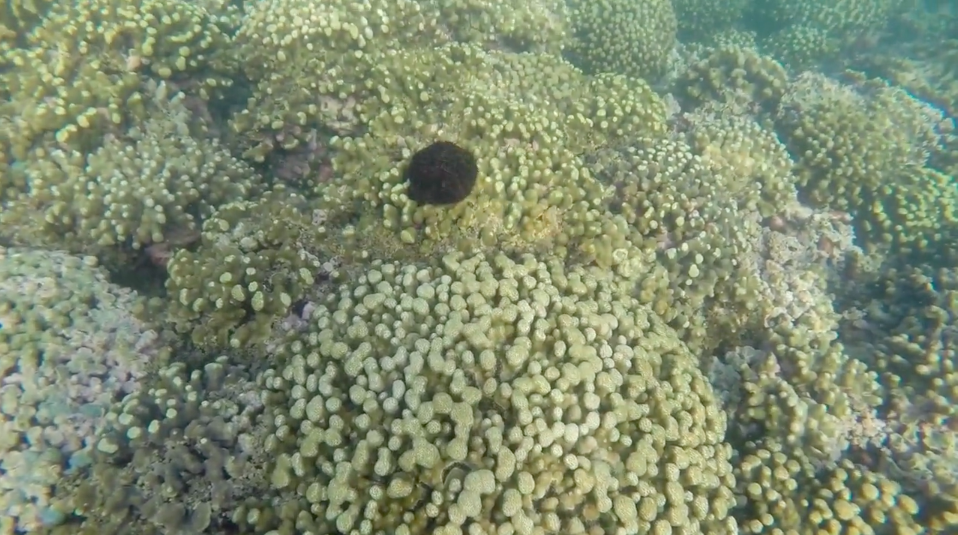 From the program’s modest beginnings six years ago, when the urchin hatchery at Anuenue first began producing urchins for planting in the Windward Oahu bay, until now; the project is considered a resounding success.  “We did our first release or urchins at Kaneohe in 2011 and recent surveys of the patch reefs there show a significant number of them are free of seaweed,“ Cohen explained.

Urchins are ideally suited for the work they perform.  They are native to Hawaii.  They have relatively few predators, they breed in captivity, and they don’t swim away like fish. While Cohen certainly credits the collector urchins for their part in scouring the bay of invasive algae (Kappaaphycus and Eucheuma), he also points out that it has declined naturally over the past year.  It’s believed this reduction is due to warm ocean conditions associated with El Nino.

Low levels of algae still remains in the bay and it could eventually grow back.  The DLNR Division of Aquatic Resources (DAR) is devoting additional resources towards urchin production to take advantage of this period of low algae levels and to try to gain more ground for the fight against invasive seaweed.

The life of a collector urchin destined for Kaneohe Bay begins when DAR teams collect brood animals about once a month.  By the time they reach the hatchery they are usually ready to spawn.  The eggs are fertilized, larvae are free swimming within 24 hours and they are fed a diet of cultured phytoplankton.  After approximately 3-4 weeks they settle down and transform into a sea urchin and then are moved from the “hatchery” stage to the “nursery” stage.  In their nursery tanks they feed on naturally growing biofilms.  When they’re about a quarter inch in size, in addition to eating biofilms, they are also fed cultured seaweed.  Over the course of about five months they grow into the size of a dime and then make the journey by truck and then boat to begin their work munching algae.

The invasive algae was first introduced into the bay in a failed experiment to create a carrageenan (an additive often found in coconut and almond milk) industry in Hawaii. The algae became a nuisance species that quickly spread over the patch reefs of Kaneohe Bay, smothering out the vibrant corals.  Over the years, Cohen and his team have refined their nursery and hatchery protocols.  In 2014, they were able to raise and release 112,000 urchins. “With luck and the constant updating of best practices for our work, in 2016 we hope to exceed that number and quickly reach a half million urchins released,” Cohen concluded.