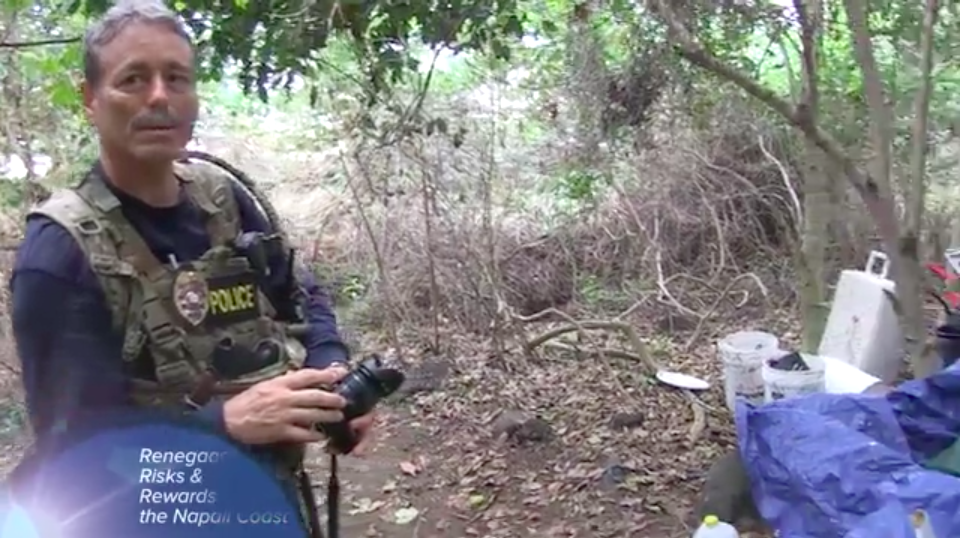 (HONOLULU) – Repeated sweeps of the Kalalau Section of the famed Napali Coast State Wilderness Park on Kauai since the first of the year, have resulted in 104 people receiving citations for unpermitted presence in the area. One man was arrested for four different violations.  Under State law, only people with camping permits from the DLNR Division of State Parks can travel beyond Hanakapiai Stream, at the two-mile mark of the 11-mile-long trail.

“Under my administration the DLNR Division of Conservation & Resources Enforcement (DOCARE) and the DLNR Division of State Parks are working closely together to bring Kalalau closer to its true wilderness character,” said DLNR Chair Suzanne Case.  “It’s discouraging to see the illegals disrespect the ‘aina and impact cultural sites by supporting a higher number of people than the park can sustain. We want to be on the record that DLNR is serious about shutting down commercial activity which has allowed illegal campers to bring in hundreds of tons of rubbish to be simply left at Kalalau for staff to clean up and dispose of.  Kalalau should be a true wilderness experience” Case added.

Over the past nine months, DLNR has documented the Kalalau law enforcement sweeps of the illegal activity, in addition to the regular clean-up operations conducted with costly helicopter support for State Park staff.  Video tape of these activities has resulted in the production of a one-half hour television special:  “Renegades, Risks, and Rewards of the Napali Coast.”

It debuts on KFVE-TV (K5) on Saturday, April 30, 2016 at 6:30 p.m. with a repeat on Sunday, May 1, 2016 at 7:00 p.m. KFVE General Manager, John Fink, said, “We are pleased to be able to join with DLNR in providing this important show about both safety for outdoor enthusiasts and respect for our ‘aina”. The program shows officers interacting with legal and illegal campers, many of whom were cited or arrested. It also depicts the tremendous effort and costs involved in airlifting thousands of tons of trash and human waste from the wilderness park each year. In the “risk” segment, viewers will learn about some of the dangers facing the unprepared or over-confident Napali visitor.

Curt Cottrell, the administrator of the DLNR Division of State Parks, said, “There are few places in Hawaii that contain the unique and stunning natural and cultural features as those found in Kalalau and along the greater Napali Coast. The dramatic rain sculpted cliffs and the pockets of white sand beaches are likely some of the most highly photographed and promoted landscapes on the planet. Our kuleana, (responsibility) is to muster the resources to ensure that Kalalau is preserved and that people, either hiking in, viewing it from the ocean in a tour boat or on a kayak, or simply flying overhead in a helicopter see this park as a wilderness with a rich cultural history, and not one marred by trash, overuse, illegal activity, or simply bad behavior.” In the first quarter of 2016 State Parks maintenance crews gathered, bagged, and airlifted more than four tons of rubbish out of the park.  In addition they shoveled 2,400 pounds of human waste from composting toilets into six large barrels that were also flown out of Kalalau.

The remoteness of the Napali Coast creates a special set of challenges for both maintenance crews and conservation officers.  DOCARE Chief Thomas Friel, commented, “In a perfect world we would have a 24-7 law enforcement presence at Kalalau, but given the logistics and expense involved, that’s not reasonable. What we can tell those – who in many cases have been operating illegal commercial operations at Kalalau for years – we know who you are and it’s just a matter of time before you are cited or arrested. Not only are you breaking the law but you are possibly putting your life and the lives of your clients at risk.” During filming of the TV special, DLNR recorded several jet ski operators bringing passengers and their stuff onto Kalalau Beach during extremely high winter surf.  Passengers report paying the drivers between $125-$150 for a lift to or from the beach.

Renegades, Risks & Rewards of the Napali Coast will be posted in its entirety to DLNR web and social media pages after its initial airing Saturday night on K5.  The television station will also provide a link to the show on its website.