Posted on May 19, 2016 in Aquatic Resources, News Releases, slider 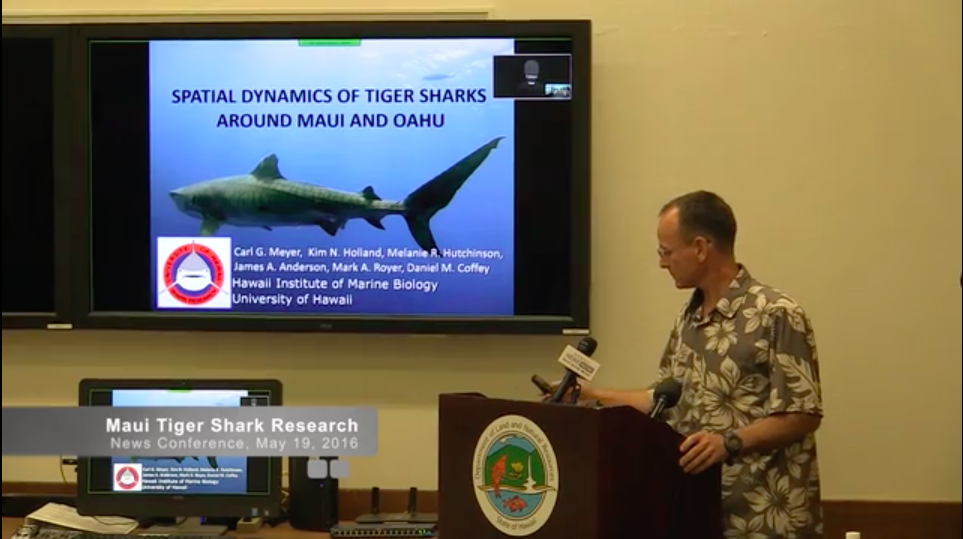 (HONOLULU) – A spike in shark bites off Maui in 2012 and 2013 prompted the Dept. of Land and Natural Resources (DLNR), with additional support and funding from the Pacific Islands Ocean Observing System (PacIOOS), to commission a two-year-long study of shark spatial behavior on Maui.  The research was conducted by a team from the University of Hawaii’s Institute of Marine Biology (HIMB).

Dr. Carl Meyer, principal investigator for the study, explained that the Maui Nui complex, consisting of Maui, Molokai, Lanai, and Kahoolawe, has more preferred tiger shark habitat than all other main Hawaiian Islands combined.  According to Dr. Meyer, “Tiger sharks captured around Maui spend most of their time on the extensive Maui Nui insular shelf, which is also an attractive habitat for tiger sharks arriving from elsewhere in Hawaii.  The insular shelf extends offshore from the shoreline to depths of 200 meters (600 feet), and is home to a wide variety of tiger shark prey.”

Although tiger shark movement patterns revealed by the latest study are generally similar to those seen in previous studies, the larger area of shelf habitat around Maui may be able to support more tiger sharks than other main Hawaiian Islands.  In addition, the most frequently-visited areas by tiger sharks around Maui include waters adjacent to popular ocean recreation sites.

Meyer noted “This combination of factors may explain why Maui has had more shark bites than other Main Hawaiian Islands, although we cannot completely rule out a higher number of ocean recreation activities on Maui as the primary cause of these differences.  However, despite the routine presence of large tiger sharks in waters off our beaches, the risk of being bitten remains extremely small, suggesting tiger sharks generally avoid interactions with people.”

Dr. Bruce Anderson, administrator for DLNR’s Division of Aquatic Resources (DAR), said, “This study provided us with important new insights into tiger shark movement behavior around Maui, and helps answer some questions about why that island has led the state recently in shark bites.  We agree with the study’s recommendation that the best approach to reducing numbers of these incidents is to raise public awareness of what people can do to reduce their risk of being bitten.  This has been our focus for a long time.  People who enter the ocean have to understand and appreciate that it is essentially a wilderness experience.  It’s the shark’s house, not ours.

DAR will continue to work with other agencies to expand outreach regarding hazards in the ocean, such as drownings, to include shark safety information so people can make well-informed, fact-based decisions.”

As for the 2012-2014 spike in shark bites around Maui, Meyer said the reasons remain unclear.  He noted, “2015 saw only one unprovoked shark bite off Maui.  Shark behavior didn’t change year to year, and there was no shift in human behavior.  These spikes occur all over the world, and are most likely due to chance.”

Citing previous studies, the HIMB team also noted that historical shark culling in Hawaii neither eliminated nor demonstrably reduced shark bite incidents.  Tiger sharks tracked around Maui exhibit a broad spectrum of movement patterns ranging from somewhat resident to highly transient. This ensures a constant turnover of sharks along coastal locations.  Sharks removed by culling are quickly replaced by new ones locally and from distant locations.

PacIOOS makes tiger shark tracks available online and provides funding for ongoing and future tagging efforts. Melissa Iwamoto, Director of PacIOOS explained, “We are pleased to be a partner in this important effort by offering an online platform where you can view the tiger sharks tracks. Providing ocean users, agencies, residents and visitors with relevant ocean data is our priority. While the tracks do not serve as a warning or real-time monitoring system, they are a great way to raise awareness about the ocean environment and to inform long-term decision-making.”

All of the partners agree that the more information people have, the better decisions they can make when entering the ocean.