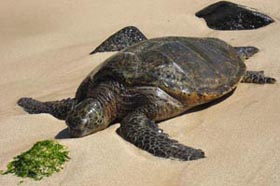 Summer is here and with it comes sea turtle nesting season! As a result, you may witness increased sea turtle activity, including mating in nearshore waters, as well as more basking (resting) on beaches. The U.S. Fish and Wildlife Service, NOAA Fisheries, and the Hawai‘i Department of Land and Natural Resources reminds everyone — locals and visitors alike — to respect our sea turtles, at all times of the year.

World Sea Turtle Day, celebrated on June 16, is a day to honor and highlight the importance of sea turtles.

The two species that nest in the islands are the green sea turtle (honu in Hawaiian) and the hawksbill sea turtle (‘ea). The majority of Hawai‘i’s honu migrate to French Frigate Shoals — located in the Northwestern Hawaiian Islands — to reproduce. However, an increasing number of honu are now nesting on beaches of the main Hawaiian Islands.

If you see a honu or ‘ea on the beach or in the water, please remember:

o   HOLD by its shell or flippers,

o   CUT LINE as close to the hook as possible, and

o   RELEASE with no (or as little) gear or line attached.

An animal that appears to be sleeping on the beach may be a basking turtle and should be allowed to rest undisturbed. However, if you see an animal in distress — with visible signs of injury, bleeding, or entanglement in debris — or one that has not moved for more than two days, it may need assistance.  Please call the NOAA Sea Turtle Stranding Hotline to report an animal in distress (numbers listed above). .

Fishermen are encouraged to follow suggestions of the Fishing Around Sea Turtles program.  This multi-agency conservation program supports recreational nearshore fisheries by promoting barbless circle hooks and best-practice guidelines to assist hooked or entangled turtles. Trailing gear (fishing line) is the biggest threat and cause of injury or death to turtles. An external hook or mouth hooking is often not a major threat. If the hook is barbed, you may cause more damage by trying to remove it rather than leaving it in place. Fishermen can help in the continued recovery of Hawaiian sea turtles by following the guidelines of: REEL-IN, HOLD, CUT LINE, and RELEASE.  For more tips to prevent or reduce the potential for interactions, search online for “Fishing Around Sea Turtles.”

Almost four decades ago, the sight of honu in nearshore Hawaiian waters would have been rare. Today, it’s common to see honu feeding, swimming, and basking in Hawai‘i.  This increased visibility is the result of State and Federal protection, which banned honu harvest and reduced nesting beach disturbances, and community-based stewardship since the 1970s. The ‘ea population, unfortunately, hasn’t responded as positively as its cousins. However, hawksbills can be seen in some foraging habitats, especially in Maui.

Mature honu females nest about every 4 years, laying approximately four clutches (nests), with each clutch containing about 100 eggs. Adult honu can grow up to 4 feet in length and weigh up to 400 pounds. Mature ‘ea females will nest every 2 to 8+ years, laying approximately six clutches, each of which contains about 180 eggs. Adult ‘ea can have a shell length of up to 3 feet and weigh up to 250 pounds. Only 20 to 25 hawksbill females nest each year in Hawai‘i; in contrast, 500 to 800 Hawaiian green turtles nest annually.

Hatchlings typically emerge from their nest at night and find the ocean by crawling towards the brighter, open horizon. They ride ocean currents, feeding and growing for approximately 6 years, until they’re about 14 inches in length. At this age and size, they return to settle in the nearshore coral reef habitats of Hawai‘i. It’s in these reef habitats that turtles will feed and grow until they reach sexual maturity at 20 to 35 years of age. Turtles then undertake their first reproductive migration, returning to the same geographic location where they originally hatched, to nest and produce the next generation of sea turtles.

The mission of the U.S. Fish and Wildlife Service is working with others to conserve, protect and enhance fish, wildlife, plants and their habitats for the continuing benefit of the American people. We are both a leader and trusted partner in fish and wildlife conservation, known for our scientific excellence, stewardship of lands and natural resources, dedicated professionals and commitment to public service. For more information on our work and the people who make it happen, visit www.fws.gov.

NOAA’s mission is to understand and predict changes in the Earth’s environment, from the depths of the ocean to the surface of the sun, and conserves and manages our coastal and marine resources. Visit us at https://www.noaa.gov or on Facebook at www.facebook.com/usnoaafisheriespiro.

DLNR’s mission is to enhance, protect, conserve and manage Hawai’i’s unique and limited natural, cultural and historic resources held in public trust for current and future generations of the people of Hawai’i nei, and its visitors, in partnership with others from the public and private sectors. Visit us at https://dlnr.hawaii.gov/ or on Facebook at  www.facebook.com/HawaiiDLNR.