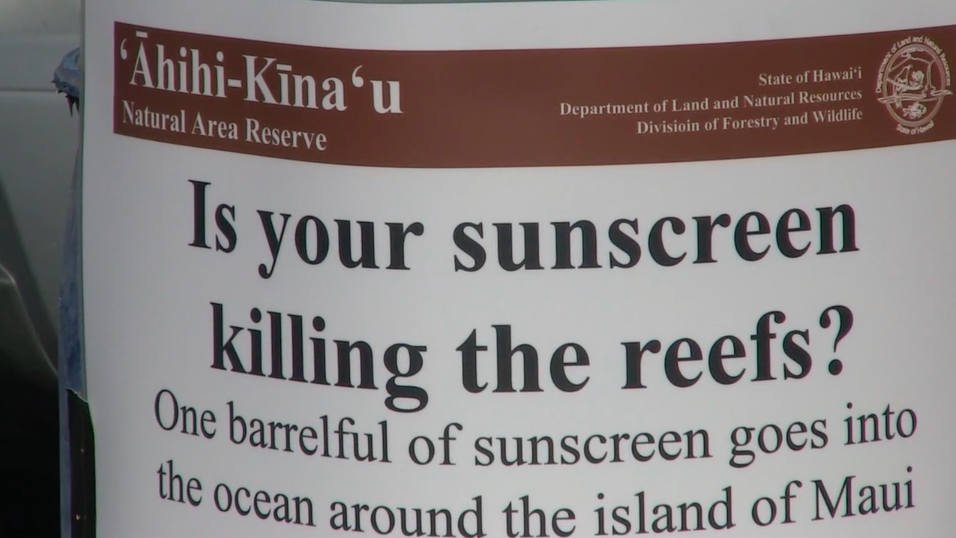 (Honolulu) – A compound commonly found in sunscreens has been shown to cause serious harm to corals, and the Department of Land and Natural Resources (DLNR) is asking people who enter the ocean to avoid using sunscreens which contain oxybenzone. Recent studies have shown that oxybenzone causes deformities in coral larvae (planulae), making them unable to swim, settle out, and form new coral colonies.  It also increases the rate at which coral bleaching occurs.  This puts coral reef health at risk, and reduces resiliency to climate change.

“One of the most important things you can do if you plan to get in or near the ocean in Hawai‘i is to use a sunscreen that does not contain oxybenzone,” said Dr. Bruce Anderson, administrator of the DLNR Division of Aquatic Resources.  “Sunscreen chemicals wash off swimmers, surfers, paddlers, spearfishers, divers, and other ocean users.  Even if you’re just sunbathing on the beach, using beach showers will wash chemicals into the ocean.  Researchers have found oxybenzone concentrations in some Hawaiian waters at more than 30 times the level considered safe for corals.”

Sunscreens are important in protecting human skin from the sun’s damaging radiation, and are highly recommended for residents and visitors who spend time under the sun.  This is especially important in Hawai‘i, where tropical latitudes result in direct sunlight that has less atmosphere to travel through than places farther from the equator.  As a result, less of the sun’s harmful ultraviolet (UV) radiation is filtered out, and it’s easy to burn.  Sunscreens contain either minerals or chemicals as active ingredients to filter out UV.  Oxybenzone is a chemical filter found in many sunscreens.

Anderson also recommends using water resistant sunscreens, which are more likely to stay on your skin, and sunscreens that use mineral filters, such as zinc oxide or titanium dioxide.  Also, rash guards or wet suits will reduce the area of exposed skin, and thus the amount of sunscreen needed for protection.

At the Ahihi-Kinau Natural Area Reserve on Maui, NAR specialist Jeff Bagshaw has made sunscreen outreach a priority.  He’s created cards to pass out to visitors who frequent the snorkeling spots there.  The cards list sunscreen chemicals in addition to oxybenzone which some scientists believe may have negative impacts on corals.  He and his volunteers try to talk to everyone who pulls into the parking lot to encourage them to begin only using products with zinc oxide or titanium dioxide as the active sunscreens.