(Wai‘anae) – Some 150 residents of a large homeless encampment on DLNR Division of Aquatic Resources (DAR) land on the Wai‘anae Coast met with a variety of providers on Friday, in the first state-sponsored Community Resource Fair.  More than a dozen service providers tallied 467 visits, from homeless people, looking for help with housing, employment, and basic needs.

Scott Morishige, the Governor’s Coordinator on Homelessness explained that the state pulled together resources to serve the nearly 300 people living in the camp. Morighige added, “We’ve been meeting with people from the encampment and the community for the past several months and one of the things we asked is; what can we do to help people get into permanent housing?  They told us about a number of barriers people face. Many don’t have photo identification. A lot of them don’t have income to pay rent and some are just not aware of the resources available in the community. So we gathered all of the resources in one spot.” 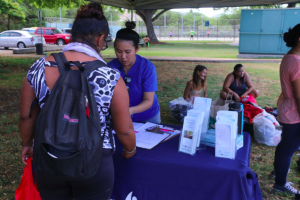 Based on the experience of reducing the number of homeless people camping in Kaka‘ako from an estimated 300 each night to 30-50, the State would like to see the same thing happen in Wai‘anae.  Morishige said, “We eventually want to see over the next year or so people steadily move into permanent housing.  This fair is something we’re looking to replicate as we think it’s a good way to meet the needs of the people. Part of the success in Kaka‘ako was bringing resources to the community.”

The Community Resource Fair at the Waianae Boat Harbor Part included booths from:

Some people came for food and clothes, others for health and insurance assistance, and at least three residents of the encampment plan to now transition into permanent housing after attending the resource fair. 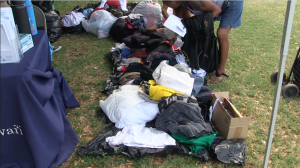 Morishige concluded, “I think the providers connected with people that they wouldn’t have otherwise.  They became more familiar with the needs of the people in the encampment and the homeless people who attended learned a lot more about services, that in many cases, they didn’t even know existed.  This was part of the state strategy of bringing resources to meet the needs of the community and really understanding what those needs are.”