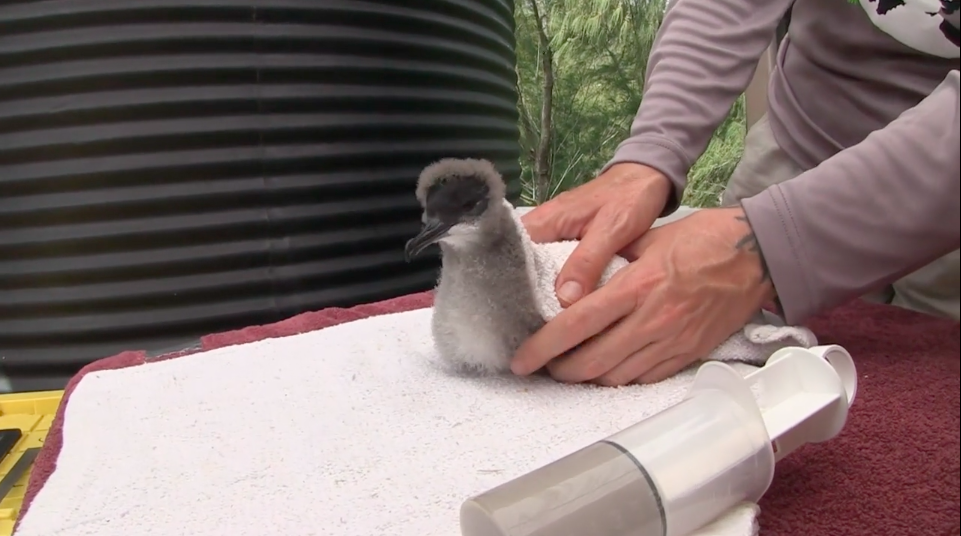 (Kilauea Point, Kauai) – “An enormous success,” is how people and organizations involved in an effort to further protect endangered Hawaiian seabirds describe the first two seasons of translocating Hawaiian Petrels and the first Newell’s Shearwaters to a predator-proof enclosure at Kīlauea Point National Wildlife Refuge on Kaua‘i’s north shore.

Today, the last of 20 Hawaiian Petrels brought into the 7.8 acre Nihoku colony this fall, fledged –flying safely out to sea.  Dr. Lindsay Young, of Pacific Rim Conservation, the non-profit organization responsible for care and feeding of the birds at Nihoku, said, “Each time one of these young birds fledges it leads us one step closer to our ultimate goal of recovery for these native birds. A huge number of individuals and organizations are involved in this project and the success of these first two years of translocations bodes well for the future.”

All of the birds were collected from colonies located in Kaua‘i’s rugged, mountainous interior, where the birds are under threat from introduced predators and loss of breeding habitat.  This, coupled with collisions with powerlines and attraction to artificial lights, has dramatically reduced their populations on Kaua’i.  Once carefully extracted from their burrows, the birds were flown by helicopter to Princeville airport where they were then driven to the Nihoku enclosure.  There the birds were placed into artificial burrows and, over the course of several weeks were fed and cared for by a dedicated team until they finally fledged. Dr. André Raine, who leads the Kaua‘i Endangered Forest Bird Recovery Project explained, “Like the proverbial ‘canary in the coal mine,’ Kaua‘i’s endangered seabirds serve as a warning for the overall health of our forests and watersheds.  With the breeding populations of these iconic birds dropping so precipitously in the last two decades, we should look to the overall health of our native forests and watersheds which is also at risk.”

American Bird Conservancy (ABC) is a primary partner in the planned five-year translocation effort to establish breeding colonies of Hawaiian Petrels and Newell’s Shearwaters at Nihoku. Hannah Nevins, ABC Seabird Program Director, remarked, “The Nihoku colony is the only fully protected colony of federally listed seabirds in Hawai‘i and what’s happened over the past two years is a major achievement and step forward in stabilizing and recovering these important endemic Kaua‘i seabirds.”

“We hope that residents of Kaua‘i, folks from around the state, and Hawai‘i’s millions of visitors, along with people the world over will appreciate the scope of this management tool and partnership as a critical step toward reversing the decline of both Hawaiian Petrels and Newell’s Shearwaters,”concluded Heather Tonneson, of the U.S. Fish and Wildlife Service’s, Kīlauea Point National Wildlife Refuge.