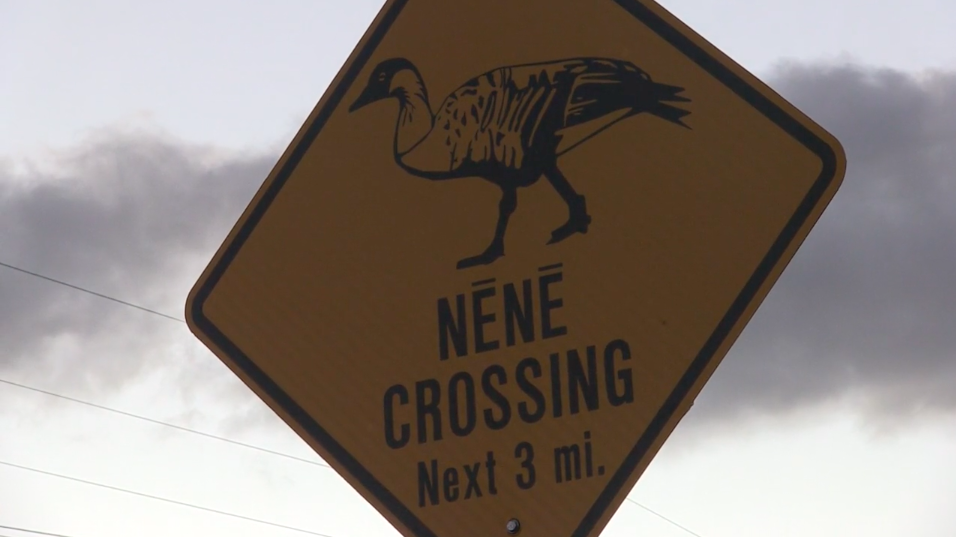 (Lihue) – In the final weeks of 2016, eight Nene (Hawaiian Goose) have been killed by vehicles along a two mile stretch of the Kaumuali‘i Highway in Kekaha. Nene are only found in Hawai‘i and are listed as endangered due to theirlow number, with an estimated 1,200 remaining on Kaua‘i. In the past two years 50 Nene have been struck and killed by cars across the roadways of Kaua‘i. Typically the majority of vehicle strikes occur in Hanalei and Kilauea, however the most recent strikes are occurring on the west side of the island.

It is believed that 25,000 Nene were present in the Hawaiian Islands when Captain Cook arrived in 1778. By the mid 1940’s only 50 birds remained. Since then, through captive breeding efforts and extensive predator control the population is beginning to grow with almost 3,000 birds statewide. Even with ongoing conservation efforts Nene are still considered to be the rarest goose species in the world.

Nene begin building nests and laying eggs as early as August although the greatest number of road strikes occur between December and April during the peak of the breeding and molting season. It is during this time of year that both adults and goslings are flightless for a period of time and are especially vulnerable. Nene are often seen foraging along the edges of highways  and ditches as a result of regular mowing and runoff from the pavement creating especially desirable grass in these areas.

Jean Olbert, a Nene biologist with the DLNR Division of Forestry and Wildlife (DOFAW) said,

“With recent rains on the west side, reports of Nene crossing the highway in Kekaha have increased dramatically. Nene regularly cross the road in the evening and early morning hours making it even more important to be on the lookout during these times. Nene remain with their mates for life and travel with their families during this time of year. After a Nene is killed on a road the remaining family members are often unwilling to leave the body, resulting in multiple birds being killed over a short period of time.”

Nene crossing signs have recently been posted by the Department of Transportation along the Kaumuali‘i Highway in Kekaha and the Kuhio Highway in Hanalei in regions where birds frequently cross roadways. DLNR/DOFAW is working with county and state transportation departments and federal partners to potentially add more signs in high-strike zones. Drivers are asked to please slow down and be extra attentive in these areas, especially in low light conditions.

To report an injured or dead bird on Kaua‘i please contact the Department of Land and Natural Resources, Division of Forestry and Wildlife at 808-274-3433.