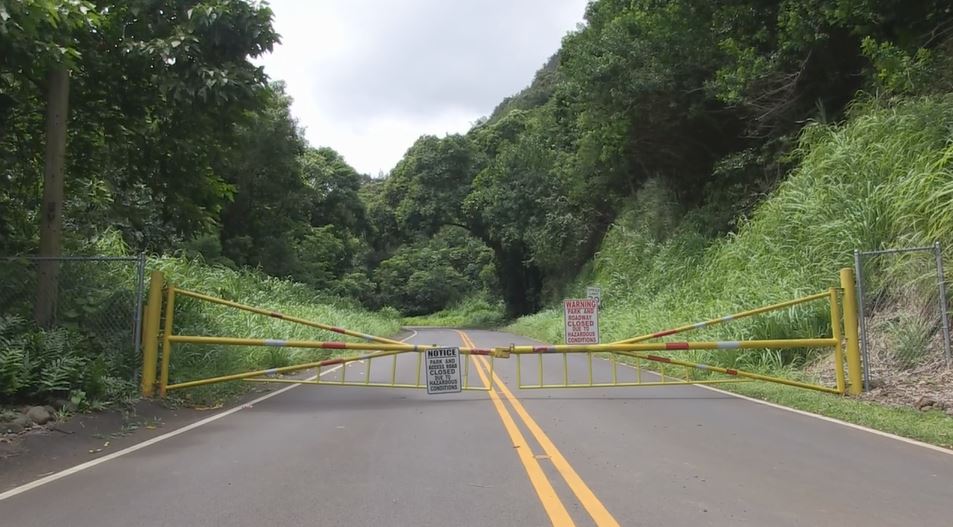 (Wailuku, Maui) – Nearly every time Larry Pacheco of the DLNR Division of State Parks arrives at one of the locked gates leading into ‘Iao Valley, he ends up informing people who are walking up the road…ignoring multiple signs that indicate both ‘Iao Valley State Monument and Maui County’s Kepaniwai Park are closed.

A 100-year flood in September 2016 forced the closure of ‘Iao and created conditions that are considered dangerous. Hazardous natural conditions are now exacerbated by the presence of construction equipment and workers in ‘Iao Valley State Monument.  Pacheco, the Maui District Superintendent for State Parks, recently encountered a jogger who’d run all the way up ‘Iao Valley Road and crossed in front of mechanized equipment working on a stream bank stabilization project. “Even though I was yelling at the guy to stop and watch out, he ignored my warnings and continued running in a closed construction zone,” Pacheco commented. Just yesterday Pacheco had conversations with several groups of visitors, who were insistent on entering the park, but later relented and left the area. Maui County employees report many similar incidents.

Homeowners who live at the head of the valley indicate cars turn around in the middle of a narrow bridge, block their driveways, and drivers, passengers, and pedestrians often ignore closed gates and closure signs. A hand-written sign, taped over a permanent sign, indicates homeowners will call the police if they see people trespassing. Officers from the DLNR Division of Conservation and Resources Enforcement (DOCARE) have been asking trespassers to leave the park and have the discretion to cite offenders.

Currently a crane is being used for contractors to shoot shotcrete (concrete shot out of a hose at high velocity) on more than 400 feet of stream bank that was washed away and severely eroded during the flooding. State Parks Administrator Curt Cottrell said, “We’ve worked hard to inform the Maui community and visitors that ‘Iao Valley is currently closed.  We realize this is a major disappointment for the thousands of visitors who have a trip to the state monument on their must-see lists. Anytime construction has to stop because of the presence of unauthorized individuals, it could have the impact of delaying the ultimate reopening of the park.”

Cottrell concluded, “We certainly don’t want anyone to get hurt because they chose to ignore more than a half-dozen closed signs. Our staff and contractors are working diligently to repair the damage and restore ‘Iao Valley State Monument to its pre-flood condition. We have always said that we hope to reopen the park sometime in June 2017 and ask for everyone’s kokua to help make that happen…by not trespassing into closed areas.”