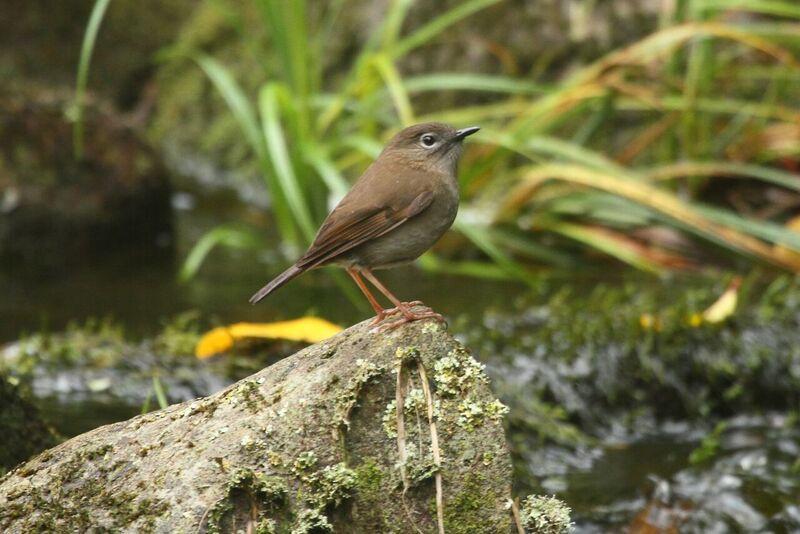 NEW STUDY SUPPORTS THE RARITY AND LIMITED RANGE OF A KAUAI ENDEMIC BIRD
Approximately 500 Puaiohi exist in the wild, all on Kauai

(Lihue, Kauai) – A new study provides the first rigorous population estimate of an enigmatic endangered bird species found only on Kauai, the Puaiohi or Small Kauai Thrush: 494 birds. Scientists have long believed that the species was very rare, but it had heretofore eluded a precise count due to its secretive demeanor and the rugged, inaccessible terrain it inhabits deep in Kauai’s Alakai Plateau.

The Puaiohi was listed as Endangered in 1967, when the Endangered Species Act became law, because of its rarity and single-island residency. One of the first goals mentioned in the plan for its recovery was to estimate the size of the population. Accomplishing this goal was hampered by a lack of resources, the species’ cryptic nature and its remote habitat.

“Population estimates are a cornerstone of species conservation efforts,” said Dr. Eben Paxton of the U.S. Geological Survey, a co-author of the study. “They are the benchmark against which managers monitor the success of their conservation efforts. If managers don’t know how many individuals exist to begin with, it is impossible to tell if a population is increasing or decreasing in response to conservation activities.”

Dr. Lisa Crampton, the lead author of the study, added: “We are thrilled that we finally have accomplished this objective.”

Once found island-wide, the Puaiohi’s range and population size has been reduced by a number of threats: habitat loss and degradation, non-native predators, and introduced mosquito-borne diseases, such as avian malaria. Previous research by Kauai Forest Bird Recovery Project and its colleagues has suggested that Puaiohi are somewhat tolerant of avian malaria, and rat predation on nesting females is likely limiting the Puaiohi population’s ability to grow in size. The new study also suggests invasive weeds at lower elevation may restrict Puaiohi’s range.

Given these results, conservation efforts for this species will focus on controlling introduced predators and reversing habitat loss from degradation and invasive weeds.

“Three hundred self-resetting rodent traps have been deployed in the core of the Puaiohi’s range, thanks to funding from the successful crowdfunding campaign – #BirdsNotRats, American Bird Conservancy, National Fish and Wildlife Foundation, and US Fish and Wildlife Federation,” stated Dr. Crampton. She continued, “This study allowed us to estimate Puaiohi distribution in remote parts of the species’ range that are difficult to survey, and identify new hotspots of Puaiohi where we should implement these management activities, which will accelerate the species’ rate of recovery.”

KFBRP, USGS Pacific Island Ecosystems Research Center, Diegmann Science Services, and University of Hawaii Hilo Hawaii Cooperative Studies Unit worked together develop a special methodology to survey this cryptic bird species in this difficult environment and to use both field-collected and remoted-sensed data to generate a population estimate. KFBRP is a collaboration of the State of Hawaii’s Department of Land and Natural Resources Division of Forestry and Wildlife and the Pacific Cooperative Studies Unit at the University of Hawaii Manoa that is responsible for conducting research that aids the conservation of Kauai’s endangered forest birds.