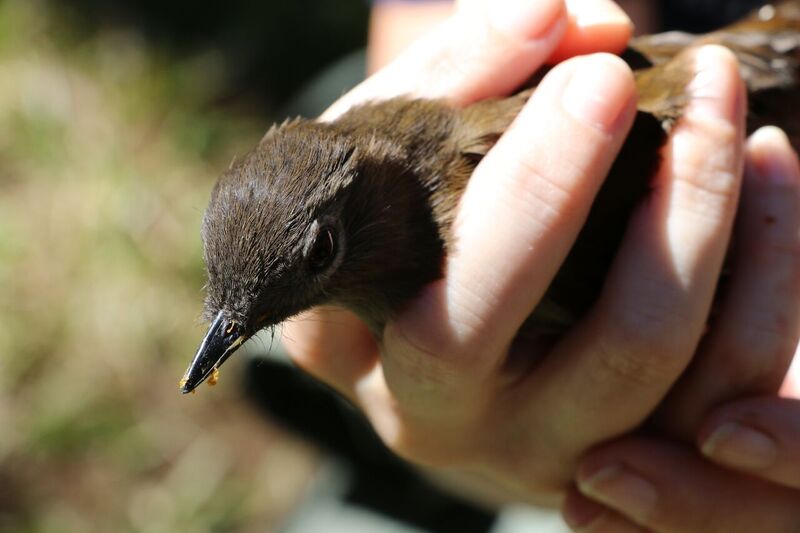 (Lihue, Kaua‘i) – Dozens of times, over the course of nearly two decades, staff from one of two bird conservation centers on Maui and Hawai‘i island boarded a Hawaiian Airlines plane with either a small wooden box or a large, six compartment crate.  For each trip to Kaua‘i they were transporting captive raised puaiohi, 240 in all, to release them to the remote, rugged Alakai Plateau below Mt. Waialeale.

Yesterday, the two-compartment box carried onto the plane by an employee of the San Diego Zoo Global’s (SDZG) Maui Bird Conservation Center, got a lot of attention from passengers. Is it a dog?  Is it a cat?  No, the worker explained, it is a puaiohi, one of a half dozen rare, endangered forest birds found only in the montane forests of Kaua‘i. The zoo officially ended its puaiohi captive breeding program a year ago, with the release of 15 birds then.  These last three were kept at one of the bird conservation centers for an additional year, because they were underweight and not quite ready for release.

Dr. Lisa ‘Cali’ Crampton, the project leader for the Kaua‘i Forest Bird Recovery Project (KFBRP) watched as the final two puaiohi to be released made their way from the Hawaiian Airlines jet, to a waiting helicopter for the quick trip to a release site at one of KFBRP’s field camps on the Alakai Plateau.  She explained, “We continued the puaiohi captive-breeding program for 18 years, because initially it had such great success. When we started it’s estimated there were fewer than 300 of the thrush left on Kaua‘i. Due to the efforts of SDZG, DLNR Division of Forestry and Wildlife & U.S. Fish and Wildlife Service biologists, our program and the support of many partners, there is now a stable population of about 500 puaiohi on Kaua‘i, according to a scientific paper we published earlier this month. Their habitat is protected by predator-proof fencing; invasive plants and animals have been controlled, and now we hope we’ll see their population numbers increase over time in the wild.”

Crampton goes onto explain that while it would be wonderful to see 1000 or 2000 puaiohi in the mountains, there was evidence that in recent releases the captive-raised puaiohi were not doing as well as experts had hoped.  Many of the birds died within several months, likely eaten by predatory rats. She said, “The releases were not getting good traction, so these were not considered a good tool for bolstering the wild population. It was a fairly expensive strategy for changing the recovery trajectory, so we decided, with the puaiohi population remaining stable, it was best to spend limited funds on rodent control and focus on two other species that are in dire straits due to dramatic population declines.”

Both the ‘akikiki and ‘akeke’e have populations of around 500 and 1000 birds respectively, and the ‘akeke’e has seen a 98% population decline over the past 12-15 years. Bird recovery teams are putting the majority of their efforts now into collecting eggs of these endemic birds from nests high in o’hia trees, hatching them, and then raising chicks at the bird conservation centers for eventual release back into the wild.

On Monday, Jennifer Holler with the SDZG bird conservation program carried the final two puaiohi to be released onto the helicopter.  At the field camp, she joined colleagues, who banded them so they can be identified and tracked.  She said both birds are females and will hopefully be good breeders and nest builders in the wild.  Holler remarked, “This is very exciting for me.  I started working with this species more than 10 years ago and we all hope this final step in the recovery program means the puaiohi will continue to thrive in the wild.”