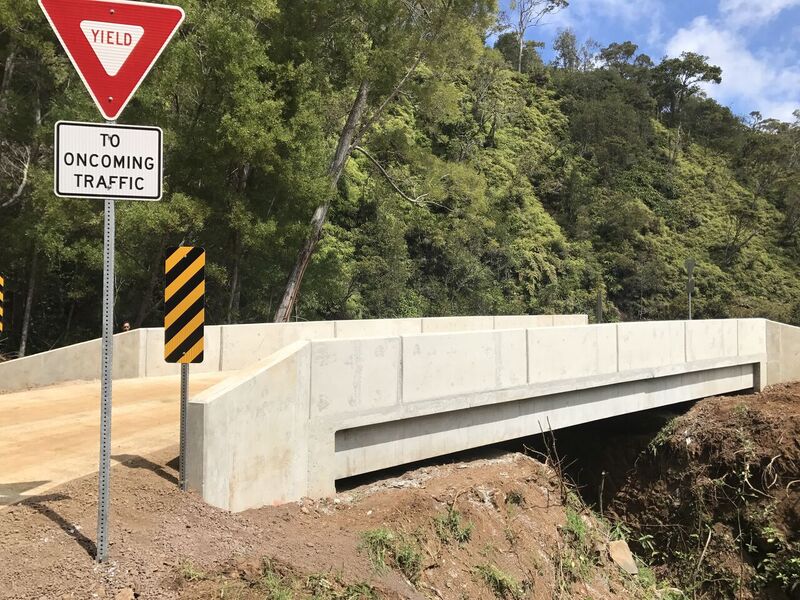 WAIMEA, KAUAI – A project to replace three (3) bridges along the Mohihi-Camp 10 Access Road in the Kokee State Park has finished two months ahead of schedule. The road and bridges will reopen for public use by four-wheel drive vehicles on Friday March 24, 2017

The Mohihi-Camp 10 Road is a six-mile long dirt road that provides access to many of the forest trails and Alakai Swamp Trail. The road starts 100 yards past Kokee State Park headquarters, on the right side of Kokee Road (Route 552) heading up. A 4-wheel drive vehicle is required for passage, and only during dry conditions because of steep and exceedingly slippery and muddy road conditions when rainy.

The construction project started in early November 2016 and was expected to be completed by the end of May 2017. Project contractor is Kiewit Infrastructure West Co. and the project cost is $2,414,000.

The new bridges were constructed using pre-cast concrete, which was selected as the preferred material for longevity and speed of construction. This construction method insured minimal to no impact to the existing stream, flora and fauna.

The capacity of the new bridges will prolong access for the public, as well as critical forestry emergency rescue and firefighting crews and maintenance personnel along the unpaved dirt access road for years to come.

This project only replaced the corroded and failing bridges which were built in 1925 and 1926 by the Kekaha Sugar Company.