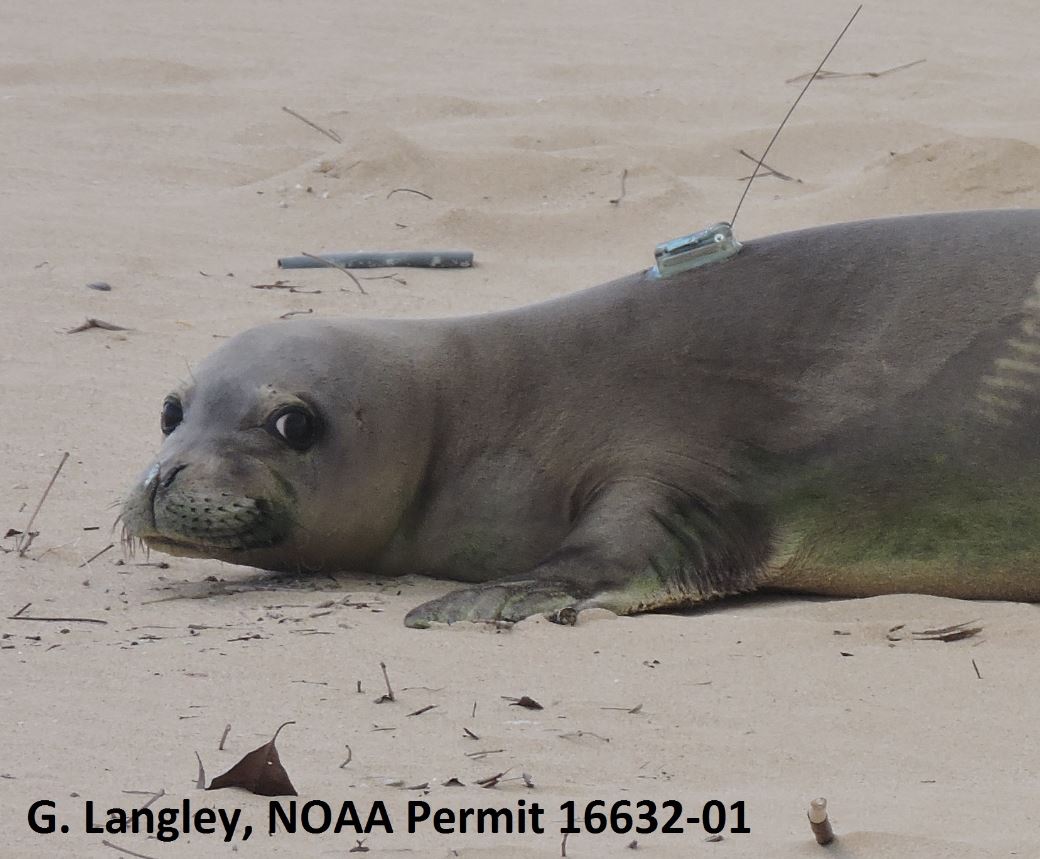 (Lihue, Kaua‘i) – A 10-month-old female Hawaiian monk seal was moved today from the Lihi canal at Kapa‘a to a beach on Kaua‘i’s west side.  RH92 had been frequenting the canal in recent weeks, likely attracted by discarded fish scraps. A team from the National Oceanic and Atmospheric Administration’s, National Marine Fisheries Service (NOAA Fisheries) translocated the seal and fitted her with a satellite tag (to track her movements) before she was released back into the wild.

NOAA Fisheries and DLNR officials determined that relocating RH92 was necessary to provide immediate protection from significant safety risks in Lihi canal. Two other juvenile seals died in the canal in 2014 and 2016 with drowning, possibly in fishing gear, as the most likely cause of death.  “We decided to undertake this rarely-used relocation intervention to address immediate safety concerns for RH92.  This will allow time for agencies and community members to work together to ensure long-term seal safety and continued community resource use in the canal,” said Ann Garrett, Assistant Regional Administrator for Protected Resources at the NOAA Fisheries, Pacific Islands Regional Office.

Under Hawai‘i state rules, a person can fish with one line with no more than two hooks in Lihi Canal (also known as Waika’ea Canal).  Taking of crabs is allowed in the canal with no more than 10 nets of less than 2 feet in diameter.  It is also legal to take shrimp for bait with a hand net of not more than 3 feet in any dimension. Fish pond owners/operators and commercial marine fishers can take pua or other small fish and baitfish with an attended net with the appropriate licenses.  All other fishing activities are prohibited.  Discarding of fish scraps is considered littering and is prohibited under Hawai‘i state law.

DLNR Chair Suzanne Case said, “We want to remind folks who use the canal to please fish responsibly according to the fishing rules and to refrain from discarding fish scraps and any other material into the canal.  We hope to foster community ownership of this canal in a way that promotes all responsible uses of this natural resource.”

RH92 was born to seal RK22 on May 23, 2016 at Larsen’s Beach on Kaua‘i’s north shore. She stayed in that area until the end of 2016. So far this year she’s been spotted on the eastern side of the island and about a month ago began using the Lihi canal a few days a week and recently every day.

The two seals that apparently drowned previously in the canal were RG13, a yearling female found dead on March 14, 2016, and R4DD, a juvenile male found dead on August 22, 2014.  Necropsies (animal autopsies) conducted on each animal showed them to be in overall good health, but had lung damage consistent with drowning.