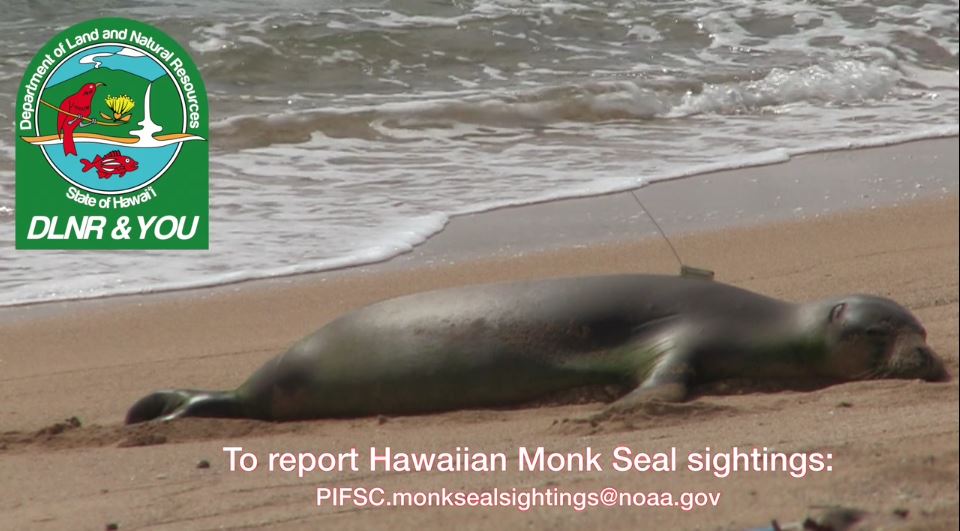 (Kapa‘a, Kaua‘i)  After wildlife biologists and veterinarians relocated a 10-month-old Hawaiian monk seal on March 30th from the Lihi Canal in Kapa‘a, to a beach on the island’s west side they’d hoped she would stay away from the canal.  Two days ago the seal, identified as RH92, returned to the canal along with an adult seal (RK13). Together they’ve been seen feeding on small fish in the manmade waterway along with discarded fish parts. The return of RH92 to Lihi is prompting stepped-up public awareness and outreach and potentially enforcement of littering laws for fishermen who dispose of fish parts in the water.

Jamie Thomton, the Kaua‘i Marine Mammal Response Program Coordinator for the National Oceanic and Atmospheric Administration (NOAA) explained, “Any time you attract a wild animal into an area where human use is high, you’re increasing the risk of interaction between people and the seal.  You’re also exposing the seal to more risks, such as fishing nets that might be in the water, fishing hooks or strikes by boats.”  The endangered Hawaiian monk seal is protected by both federal and state laws, and injuring or killing a seal carries serious penalties.

The day after RH92 (now carrying a radio transmitter on her back so her movements can be tracked), returned to the canal she rested and basked in the sun on nearby Fuji beach.  As is standard practice with any of Kaua‘i’s population of an estimated 45 Hawaiian monk seals, volunteers posted signs asking people to give her wide berth. “We try to foster the co-existence with public education and outreach,” said Mimi Olry, the Kaua‘i Marine Mammal Response Field Coordinator with the DLNR Division of Aquatic Resources (DAR).  She added, “We depend on people taking up a sense of doing what’s appropriate around these large marine mammals.  We’d like to see people respect them, give them their space, and not to create situations that put both seals and humans at risk.”

The disposal of litter, like fish parts, is not only illegal, they decompose in water that people fish and swim in. Officers from the DLNR Division of Conservation and Resources Enforcement (DOCARE) are increasing their visibility and patrols at Lihi. For now they want to be sure captains, crews, and fishers on boats that launch from the canal’s ramp know that disposing of any fish parts in the water is against the law. If one-on-one education doesn’t work DOCARE officers may begin writing citations for littering.

Monk seals frequently explore inland fresh waterways like streams and rivers. The attraction of discarded fish parts in these areas is particularly hazardous for young monk seals. Over the past two and a half years, two yearling seals were found dead in the Lihi Canal. It’s believed they drowned, possibly after getting entangled in fish nets. Neither seal had any sign of disease or obvious trauma.

“The last thing we want is to lose RH92, because she’s come back to Lihi, for the easy food of discarded fish guts, heads, and tails,” Thomton said.  He added, “We’re focusing outreach, education and possible enforcement efforts on boat fishing, as this is where the parts are coming from.”  The law requires that all fish parts be thrown into garbage cans provided at all State of Hawai‘i small boat harbors.

Hawaiian monk seals feed mostly on small reef fish, tako (octopus), and lobsters. Despite beliefs to the contrary, they do not feed on fish like ono, ahi, and mahi mahi.  Extensive scientific studies have shown what species of prey the monk seals prefer, and there’s no evidence that they feed on the large, fast moving pelagic fish that deep sea fishermen prefer.

Moreover, according to DAR’s Mimi Olry, “Top predators like seals and sharks help keep reef fish populations healthy, because just like wolves on the land, they pick out the sick and injured fish to feed on. Marine mammals are part of our ecosystem and the Hawaiian monk seal is a sentinel species, in that the health of its population can provide advance warnings about environmental conditions for people. We can and should co-exist with them”

There are no plans to move RH92 a second time and it’s hoped with increased outreach and education people will stop throwing fish scraps into the water and she’ll move on to safer locales.