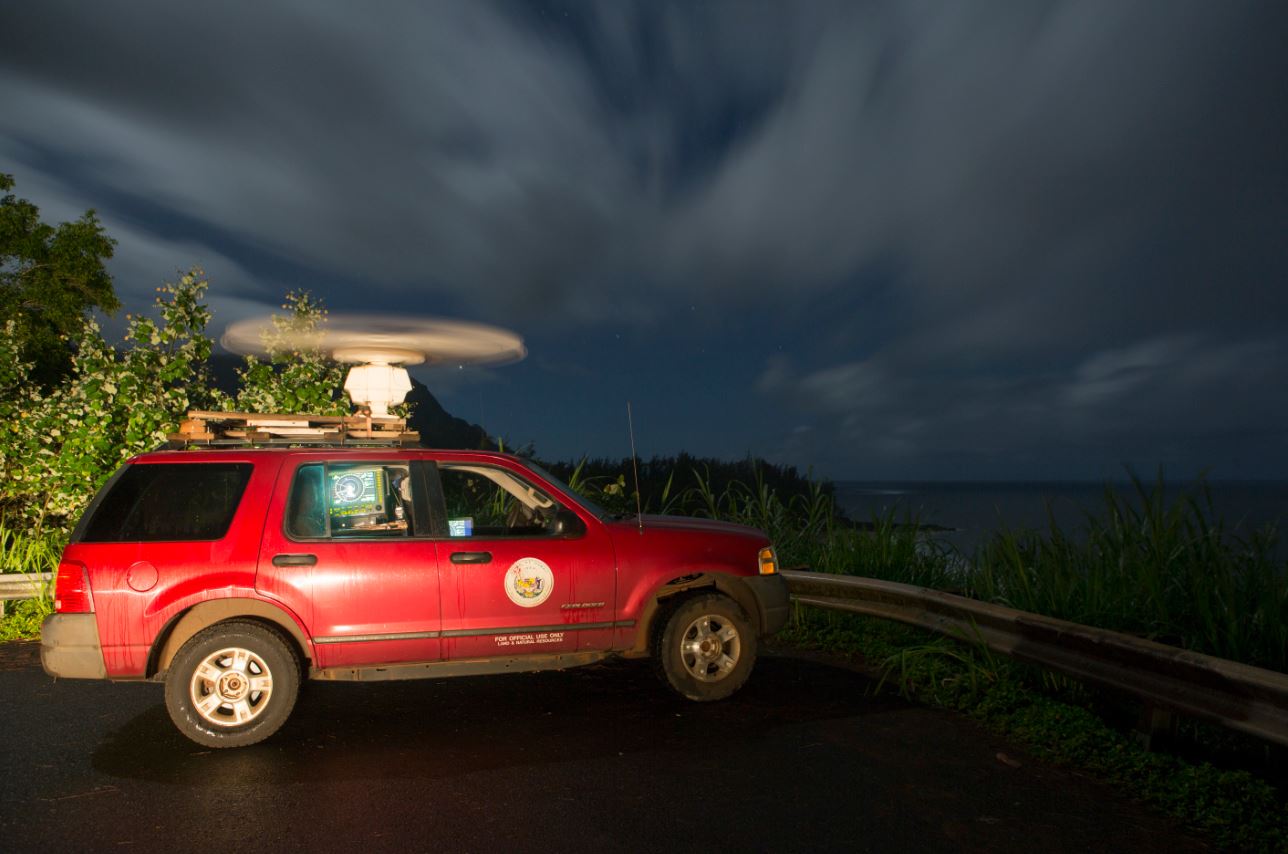 (Lihu‘e) – An analysis of long-term radar studies on Kaua‘i has revealed massive declines in populations of the island’s two endangered seabirds, the Kauai Endangered Seabird Recovery Project (KESRP) announced today.  The study, due to be published online in the scientific journal Condor on June 5th, shows that between 1993 and 2013 populations of the ‘A‘o (Newell’s Shearwater) declined by 94% and Ua‘u (Hawaiian Petrel)  by 78%.

“The results of this study demonstrate just how poorly these two iconic birds have fared on Kaua‘i over that time period,” said Dr. André Raine, lead author of the paper.  “With the majority of our radar sites showing massive decreases in numbers of these birds over the years, populations of the birds are in a rapid downward trajectory – particularly in the south and east of the island.  The study highlights just how critical recent conservation initiatives for the species on Kaua‘i are if we are to have a hope of reversing the situation.”

The study used truck mounted radar at 15 standard sites around the island.  Radar surveys at these sites were started in 1993 by Robert Day and Brian Cooper of ABR Inc., and were continued near-annually by the Kaua‘i Endangered Seabird Recovery Project from 2006 onwards.  Radar is utilized worldwide to study birds and is a key tool to monitor the island’s seabirds as they fly overhead in darkness to and from their breeding colonies and the sea.  The radar allows observers to “see” the birds flying overhead in the darkness as a series of dots passing across the radar screen.  By assessing the speed of movement, the direction of travel, and the time that the event is recorded, birds are identified to species.

“Kaua‘i’s endangered seabirds are under threat from a whole suite of issues, including introduced predators such as feral cats, powerline collisions, light attraction and invasive plants – as well as threats at sea which could include overfishing, by-catch and the effects of climate change.

Kaua‘i holds 90% of the world’s population of ‘A‘o and a significant proportion of the world’s population of Ua‘u, so it is vital that we protect these birds,” continued Dr Raine. “Recent conservation initiatives on the island from a wide range of different organizations, land-owners and entities have shown that people are become more and more aware of the perilous state of these birds.  This gives me hope that we can reverse these spiraling trends.”

Radar work will continue on Kaua‘i in 2017, starting now until the middle of July.  For more information on this critical component of KESRP’s work, please visit the project website at https://kauaiseabirdproject.org/. The Kaua‘i Endangered Seabird Recovery Project is a joint project between the Department of Land & Natural Resources (Division of Forestry & Wildlife) and the University of Hawai‘i (Pacific Co-operative Studies Unit).  Radar surveys are funded via a State Wildlife Grant from the U.S. Fish & Wildlife Services.