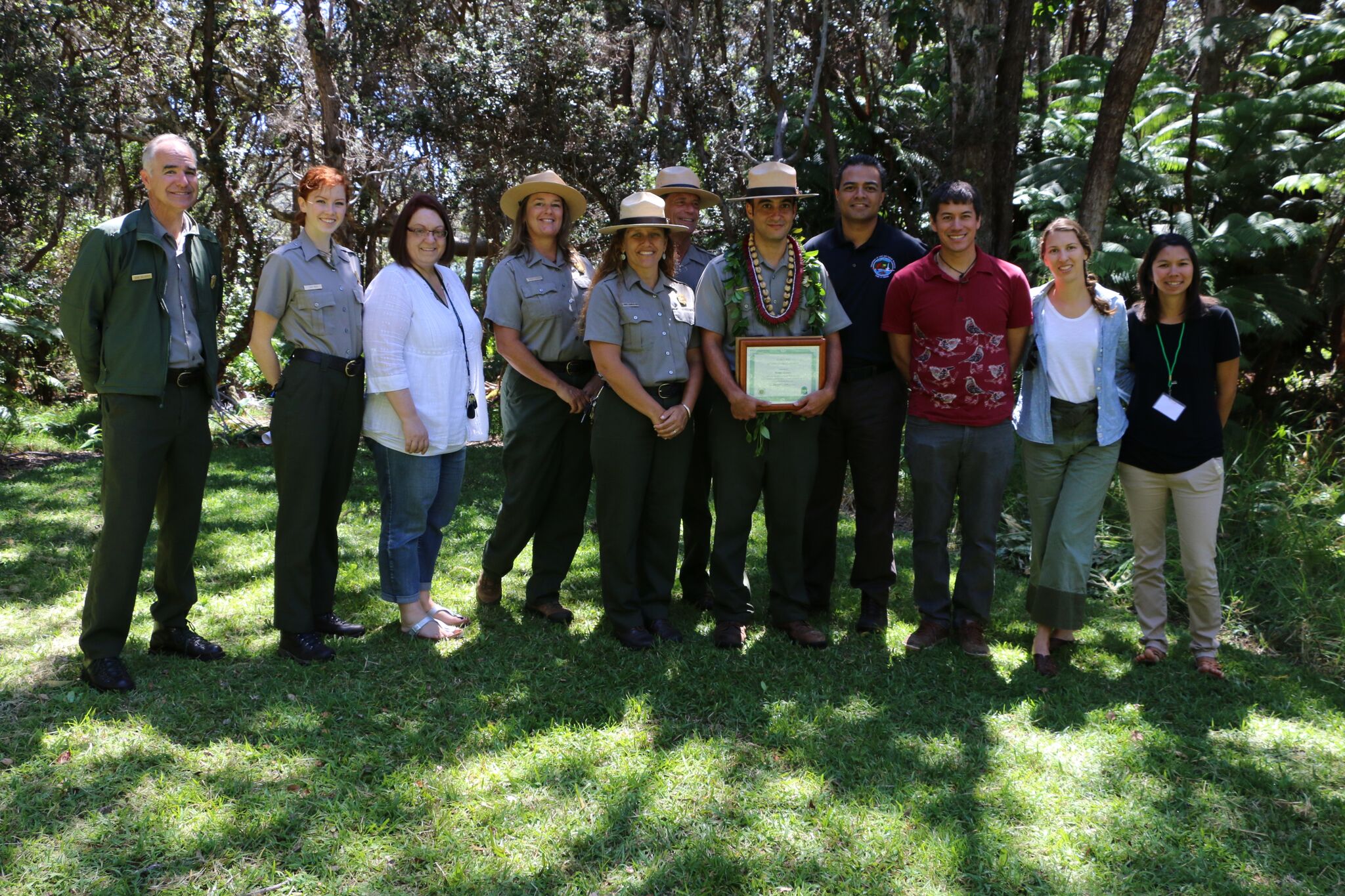 As a graduate student at the University of Hawai‘i at Hilo, Gomes conducted painstaking research in an effort to find the historical name for the endangered Hawai‘i Creeper. He pored through hundreds of pages of old Hawaiian newspapers and reviewed virtually every bit of literature he could find on the traditional name of the tiny forest bird.  In his thesis, which was published in the ‘Elepaio Journal, Gomes posited that the customary name of the Hawaiian Creeper is ‘Alawī.  This convinced the Hawaiian Lexicon Committee to approve the name.  The committee, established in 1987, approves the creation of words for concepts and material culture, unknown to Hawaiian ancestors.

DLNR First Deputy Director Kekoa Kaluhiwa presented the award to Gomes.  He said, “As a graduate student, Noah chose to research and review major literature on native Hawaiian birds by important authors in the late 19th and early 20th century to try and find a specific Hawaiian name for the Hawaii Creeper.  For more than a century there was no known Hawaiian name for this endangered bird.” In a statement read during today’s award ceremony Kaluhiwa added, “We are grateful for Noah’s efforts and hereby present him with a DLNR Citizen Conservationist Award, for his efforts to preserve our Native Hawaiian cultural heritage; in a time when birds like the ‘Alawī are endangered and even on the brink of extinction. His efforts help us all recognize not only the ecological importance of the ‘Alawī, but also the role it plays in our lives and those of our ancestors.

On May 31, 2017, during a naming ceremony for the ‘Alawī at the Pu‘u Maka‘ala Natural Area Reserve, not far from Hawai‘i Volcanoes National Park, Gomes did the blessing and led an ‘awa ceremony in honor of the bird’s naming. In remarks after he received his award Gomes explained, “This joined my life-long love of birds with my passion for Hawaiian culture and our language. I’m thrilled and honored to have been involved in the naming of the ‘Alawī.”

Alex Wang, (pronounced Wong) a bird specialist with the DLNR Natural Area Reserve program, and a Gomes’ friend commented, “Noah has such a deep sense of place and appreciation for native Hawaiian culture and what it represents to everyone, Hawaiian or not, living in these islands today.  He truly personifies the very best traits associated with the people of our host culture. In addition to what I expect will be many notable accomplishment in his future, he will be known in the history books as the person who named the ‘Alawī. and as Noah said how many of us are fortunate enough to marry a childhood fascination with a professional contribution to science and culture.”

The DLNR Citizen Conservationist Award program was established in early 2017 to recognize people in the community who go above and beyond to assist the department in fulfilling its mission of protecting the natural and cultural resources of Hawai‘i nei.