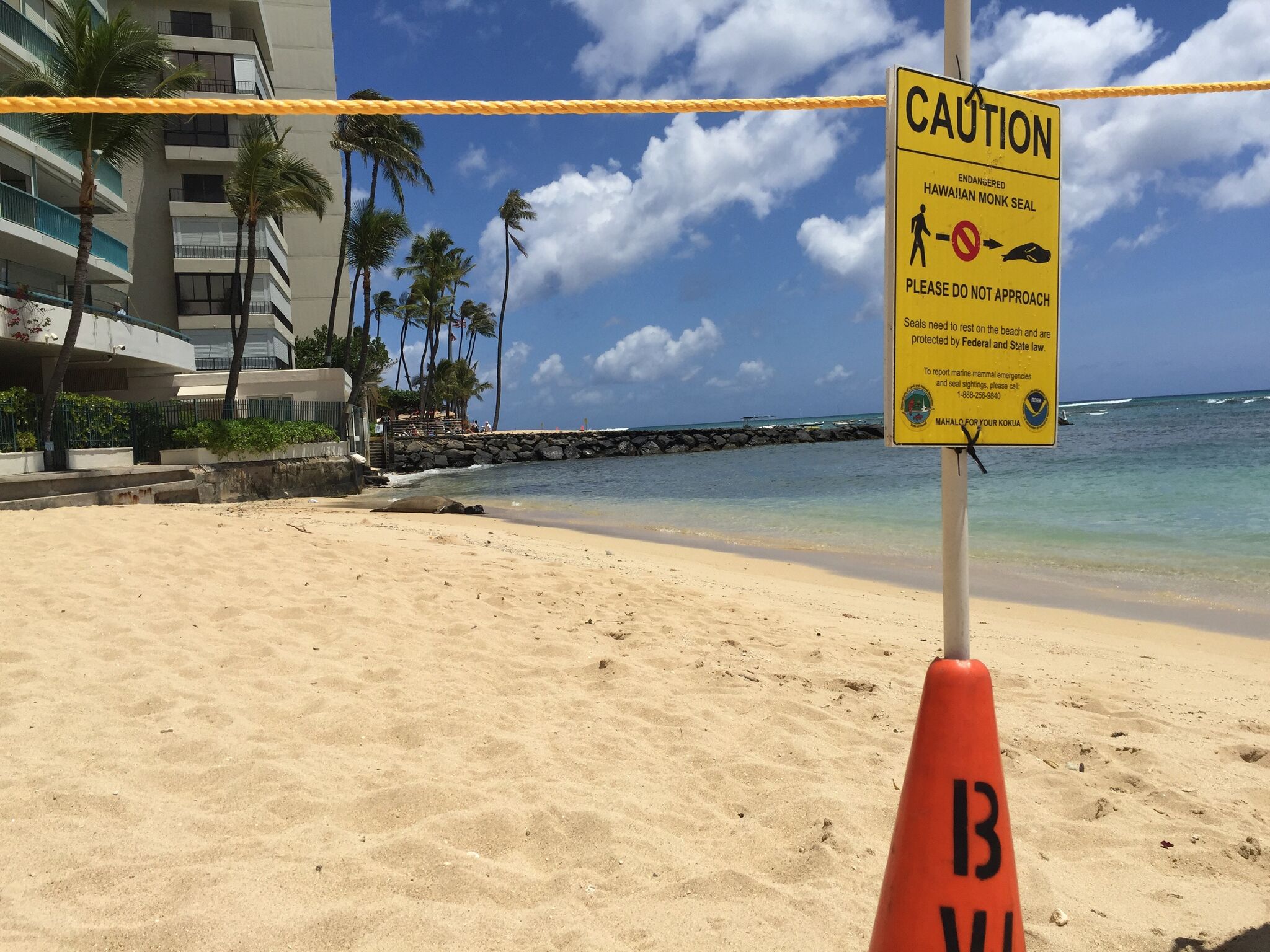 HONOLULU —  Marine resource protection officials are asking the public’s cooperation to keep their distance and avoid disturbing a Hawaiian monk seal mother and her newborn pup on the popular Kaimana beach at Waikiki.

Some time overnight the female monk seal known as “Rocky” or RH58, gave birth to a seal at the far Diamond Head end of Kaimana beach. She had been seen frequenting that area in recent days. Volunteers from the Hawaii Marine Mammals Alliance Oahu group have set up a safety perimeter with ropes and signage to keep viewers a safe distance away to avoid disturbing the mother seal and her pup. It’s also important for human safety since a mother seal may charge anyone that gets too close on the beach or in the water that might be viewed as a threat.

Volunteers will keep watch in shifts and provide education and outreach information to beachgoers over the approximately 5 to 7 weeks while the pup is weaned and eventually able to forage for food on its own.

According to Angela Amlin, NOAA Hawaiian Monk Seal Recovery Program Coordinator, this is the 10th pup for RH58, but the first one to be born on Oahu. The other nine were born on Kauai. She said, “Our first concern is for human safety. People should stay behind the ropes on the beach and avoid swimming near the seals. It’s also important not to attempt to approach or interact with the seals, or try to feed them, which could habituate them to human contact and could lead to future problems.”

NOAA staff are contacting condominium and hotel managers, also Ocean Safety lifeguards in the vicinity for cooperation to mark off the area so the seals may rest undisturbed. Monk seals are protected under state and federal laws.

Kristen Kelly, DLNR’s Division of Aquatic Resources Marine Wildlife program assistant, says, “It is a really exciting event to have a pup born in such a popular and highly traveled area. It is also a concern for us here at DLNR. It is important to respect these animals especially a mother seal giving protective care to her pup. It is very important to give the pair space and respect in this vulnerable time. Take care to remain behind the barriers and head more to the ‘ewa side of the beach to enter and exit the water while the pair is here. Take special care in the water near the mother seal — there have been several instances of mothers protecting their pups from a perceived threat in the water, and attacking even if their baby is on shore. We advise staying out of the water on that side of the beach until the pair leaves. Try to remain at least 150 feet away in the water.”

She further adds, “We want people to enjoy viewing these special animals but please watch from a respectful distance! When observing these highly endangered species let’s do the right thing: take care and respect the seals, avoid sudden noise or any disturbance that could cause the mom to leave unexpectedly before she should. She needs to stay with the pup until it is ready to go out on its own. We also don’t want these wild animals to become conditioned to humans being nearby or trying to feed them. Please allow a respectful distance from seals so their pups can grow up naturally.”