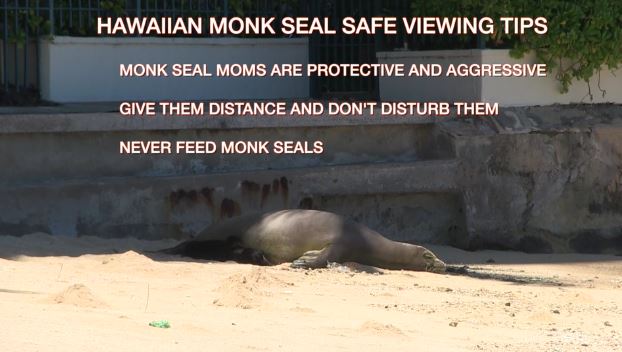 HONOLULU —  State, federal and City and County officials continue to urge people to use extreme caution at Kaimana Beach as a monk seal mother and her growing pup become more active both on the beach and in the near shore waters.

“Seals are wild animals that can move very quickly in the water,” said Kekoa Kaluhiwa, DLNR First Deputy Director.  “Mother seal RH58, also known as “Rocky” has already demonstrated natural protective behavior toward her pup when she recently charged a male seal.  She may bite if she perceives a threat.”  (see video below).

The mother seal is expected to be with the pup for another three to four weeks*.  The pup was born sometime between June 27 and 28 and was recently determined to be a female.  The mother and pup are spending more time in the water, which is dangerous for swimmers and other ocean users, since people can easily be misidentified as a threat by the mother seal.

For this reason, DLNR, the National Oceanic and Atmospheric Administration (NOAA), and City and County of Honolulu Ocean Safety and Lifeguard Services strongly urge people to stay out of the water between the Outrigger Canoe Club and the Waikiki Natatorium. Swimmers who use Kaimana Beach to swim back and forth to the offshore wind sock for exercise are particularly vulnerable on their way back to shore as they are not able to see the seals or hear lifeguard warnings. Children and anyone distracted in the water are of particular concern.

People who disregard these recommendations and choose to enter the water are doing so at their own risk. They should remain extra vigilant of the seals’ location to avoid being in proximity to them. People should also be attentive for lifeguard warnings. When the seals enter the water people may only have a few seconds to get to safety.

A vivid demonstration of Rocky’s protective behavior can be seen in the video clip which shows her attacking another seal who ventured too close to her pup. Protective mother seals can mistake people in the water for a rival seal. This can lead to people getting seriously hurt.  A recent example of aggressive behavior was an attack on July 6 by a seal on a swimmer at Midway Atoll.  A U.S. Fish and Wildlife Service employee was hurt badly by a Hawaiian monk seal while swimming off North Beach at Midway Atoll National Wildlife Refuge and Battle of Midway National Memorial.

Rocky is expected to wean her pup within the next three to four weeks, and she will start leaving Kaimana to forage, at which time the public safety risk will drop significantly.

Monk seals are an endangered species and it is illegal to disturb or harm them. Violations can result in fines as high as $50,000 and carry a year in prison.