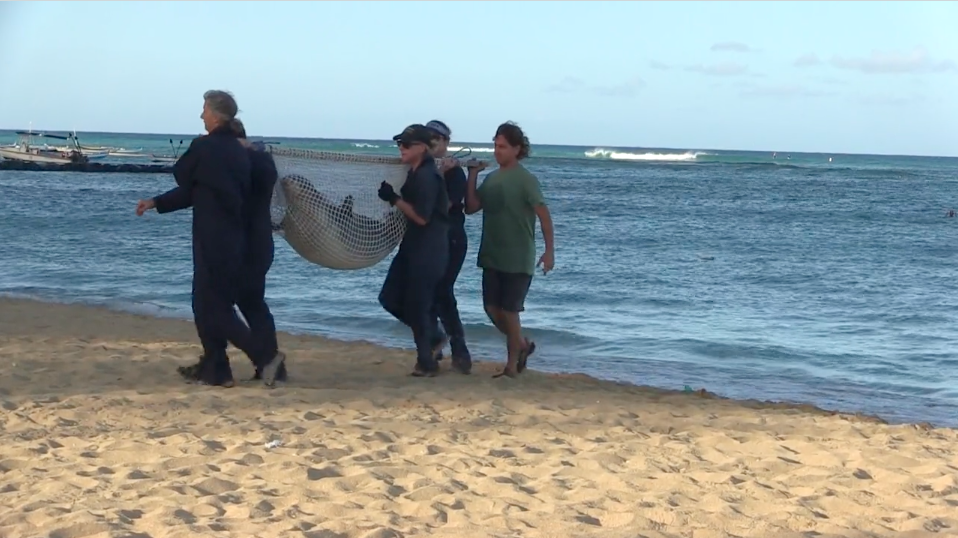 (Honolulu) – The now famous Hawaiian monk seal pup who spent the past 44 days on busy Kaimana Beach in Waikiki was successfully relocated by a team of expert handlers and veterinarians this morning.  Named ‘Kaimana’, the young seal weaned from her mother ‘Rocky’ midday Friday.

At first light Saturday, a large team of people from various offices of the National Oceanic and Atmospheric Administration (NOAA), DLNR and Hawai‘i Marine Animal Response (HMAR) began scouring the beach for Kaimana.  They’d hoped she hadn’t swum into the dilapidated Natatorium, which she’d entered at least three times over the past week and a half. She’d last been seen at about 12:30 a.m.  Around 6:30 a.m. she was spotted swimming in the surf near the Outrigger Canoe Club and ultimately hauled out of the ocean near the Kaimana Beach lifeguard tower.  By that time a large crowd of onlookers and well-wishers had gathered.

Using a net stretcher, a team of experts scooped Kaimana off the beach and carried her up to a truck, where she was loaded into a cage for transport to an undisclosed location.  Experts had decided that given the large numbers of people on various Waikiki beaches and in the water, for both public and the seals safety it was best to move Kaimana to a more remote location.  Earlier in the week, at a news conference they explained that young, impressionable and curious pups, interacting with humans, could develop behavioral traits that later in life can create problems.

At the relocation site, Kaimana was carefully examined by a veterinarian who declared her healthy.  She was outfitted with a satellite tracker to assist researchers in tracking her for at least a few weeks until she sheds the device.  Volunteers and staff from HMAR will maintain a safety perimeter and signage around the seal.  Officers from the DLNR Division of Conservation and Resources Enforcement (DOCARE) will be doing additional patrolling in the area to watch for illegal fishing activity, as young seals have drowned in discarded or derelict fishing nets.  They’ve also been hooked by fishing hooks, which is why conservationists encourage the use of barbless hooks around the Hawaiian Islands. Additionally survey teams from the DLNR Division of Aquatic Resources have been conducting in-water surveys to identify and clear nets and hooks and will continue this work at the relocation site next week.