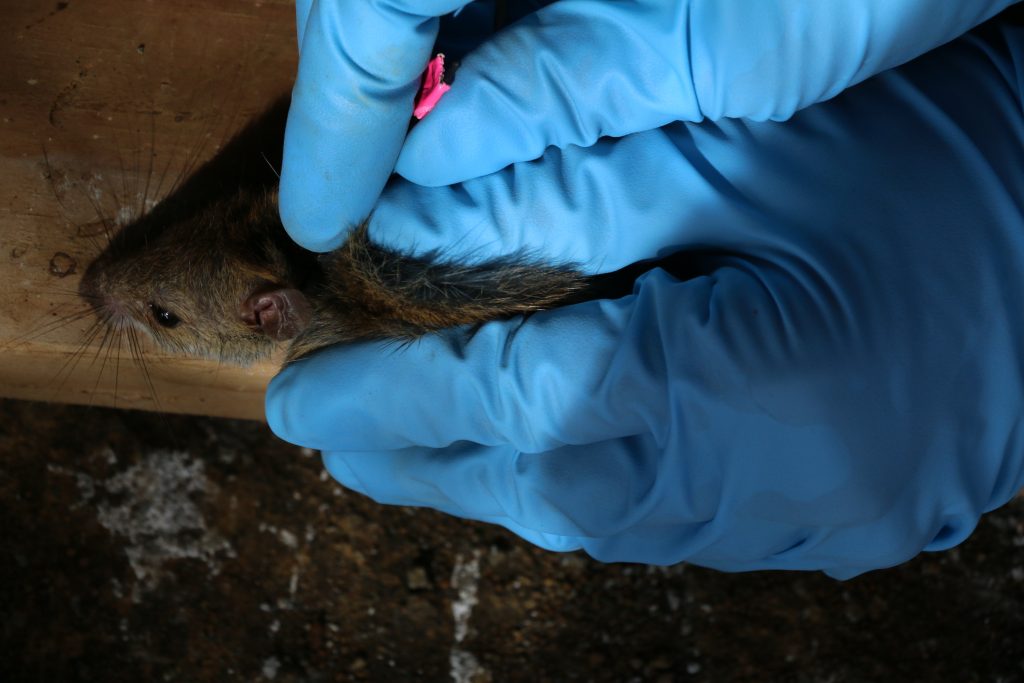 (Lihu‘e, Kaua‘i) – The second scheduled aerial application of a rodenticide to eliminate invasive rats from the State Seabird Sanctuary on Lehua Island was successfully completed today.  As with the first helicopter application on August 23rd, this second application began at first light and was complete in about three hours.

Over the past week, field teams based on Lehua Island have been closely monitoring near-shore waters, including tide pools, for evidence of the green-colored, pencil eraser-shaped rodenticide, which is largely inert plant and cereal based material, (99.995% of the bait is non-toxic and the remaining fraction is diphacinone, a first-generation anticoagulant rodenticide).  After three applications, spread over 18 days, the rodenticide will be available to rats for at least 25 days and is intended to completely rid the island of rats, introduced to the island most likely unintentionally by people decades ago. The small rats eat seabirds, eggs and chicks, as well as native plants, making it impossible for the sanctuary and its wildlife and plants to thrive and grow.

Mele Khalsa, an island restoration specialist for Island Conservation, the State’s primary partner in the Lehua Island Restoration Project, leads the on-island team which is conducting daily and constant monitoring of any impacts of the bait to terrestrial and marine ecosystems.  Khalsa said, “Near-shore marine and intertidal monitoring are a very important part of this project and it is an activity that the on-island crew takes very seriously.  We regularly walk the shoreline and spend quite a bit of time under the waves making observations.  So far all we have seen is healthy and vibrant sea life.”

On application days, independent inspectors from both the U.S. Dept. of Agriculture and the Hawai‘i Dept. of Agriculture have monitored the project to ensure compliance with all state and federal rules and regulations and to ensure there are no negative impacts to any animals other than the rats. The permits and regulations allow for a small amount of bait drift into nearshore marine waters. Studies have shown that fish in the local area will not consume the bait. Likewise, on hundreds of similar projects, there have been no incidences of impacts to corals or marine mammals.

Prior to the first spread of bait on Lehua, the field teams trapped about two dozen rats, outfitted them with radio tracking collars, and then released them to their home ranges where they were trapped. So far one quarter of these rats have perished by consuming lethal amounts of bait. In addition, a significant number of un-collared rats have perished. The field team continues to trap rats and all of these rats are showing signs of bait consumption. Monitoring will continue for the next year to ensure the project’s success, at which time restoration plans will be developed to replant the island with native species of plants favored by the 17 seabird species currently on the island and to attract others that have been driven off the island by the invasive rats. The third and final rodenticide application is scheduled for 10 days from now, dependent on favorable weather conditions.

Khalsa reports Lehua’s birds are doing great.  Prior to the first bait application last week, the field team was finding an average of one wedge-tailed shearwater chick carcass each day. There haven’t been any new chick predations documented since then.

DLNR, Island Conservation, and a broad cross-section of conservation, science, community, and Native Hawaiian partners indicate that for the project to be viewed as a success there needs to be 100% eradication of rats from Lehua.