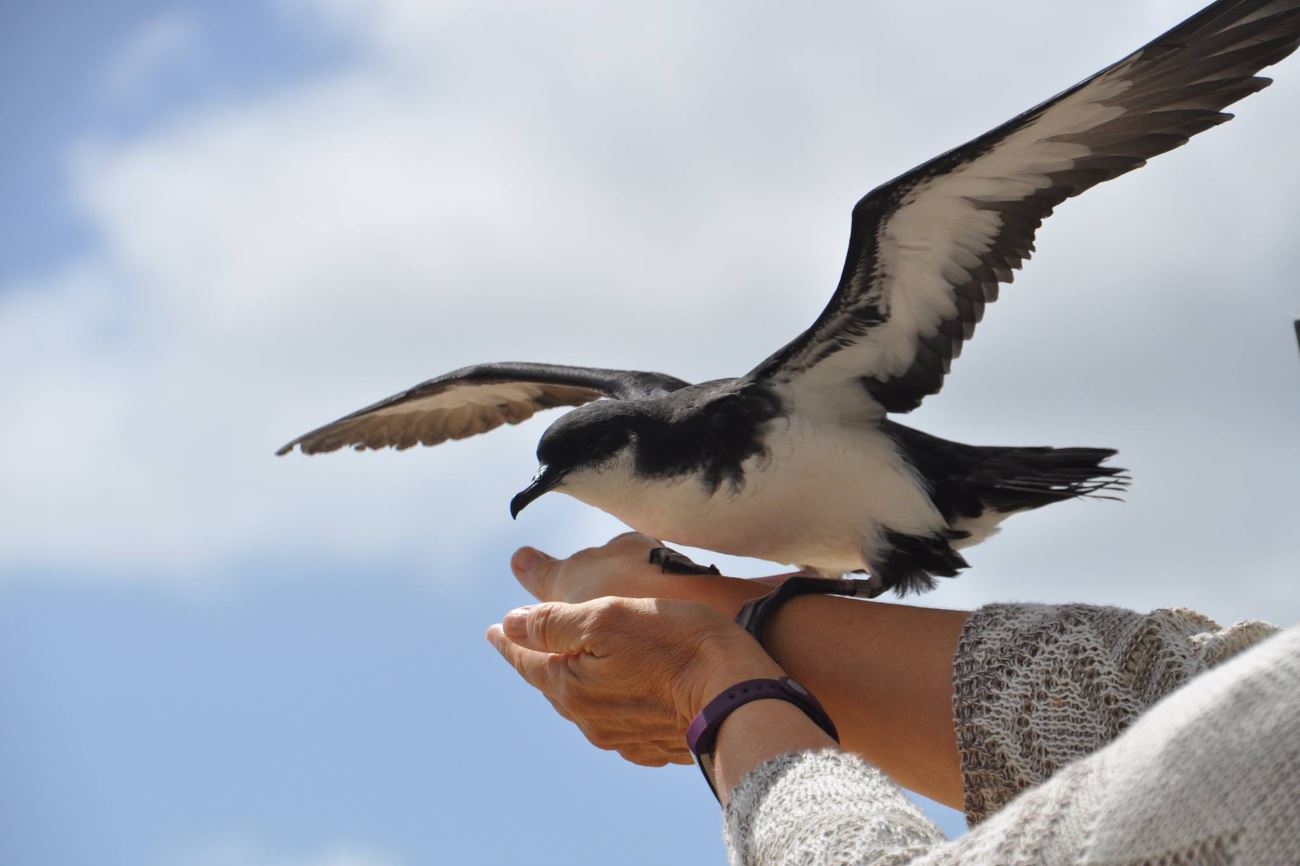 Every year, young ‘A‘o and U’au (Hawaiian Petrels) are attracted to artificial lights on the island of Kaua’i.  After they fly for the first time from their burrows in the remote mountain areas in which they breed, they get attracted to the bright lights of towns – which they circle until they end up exhausted and grounded. If they are not rescued by concerned people, they become easy prey for the large numbers of cats and dogs on the island or are run over by cars.  Many are never found.

Those that do get rescued are passed over to SOS. There the birds are examined by trained staff, rehabilitated as necessary and then released to continue their journey out to sea.  Satellite tracking work undertaken by KESRP and SOS has shown that the young birds then fly over 2,000 km to an area to the southwest of Kaua’i which is rich in fish and squid.

Derek Harvey, a KESRP staff member who helped organize the event, explained. “This event is a highlight of our year, where school children have the rare opportunity to see these precious seabirds.  As well as seeing the birds up close and personal, each bird, just before release is offered a pule (Hawaiian prayer) by Kupuna Sabra Kauka – highlighting for the children the importance of this species in Hawaiian culture.”

As well as attending the release event, staff members of KESRP went to both schools to talk to the children about Kauai’s endangered seabirds. They learned fun facts about the island’s three endangered seabirds, and why Kaua’i is such an important place for them (as it holds an estimated 90% of the World population of the A’o in particular).  Both the ‘A’o and the U’au have suffered massive declines in recent decades, due to a wide range of factors including collisions with powerlines, fall-out of fledglings due to artificial lights and predation by introduced predators (such as feral cats, rats and pigs).

After the school visits, children were asked why it was so important to protect Kaua’i’s endangered seabirds, and children from Kanuikapono Charter School were quick to answer.  Ten-year-old Noakea Bean said “We should protect the A’o because they are very pretty and in danger of becoming extinct. They also help us with finding fish.”.  Sonya Ell, also 10, added, “If we don’t help the A’o they could become extinct and we don’t want that to happen. They are very important birds and plus they are super cute!” Nine-year-old Kea Eu-Parziale concluded “I think we should protect the A’o because we are all connected and when something bad happens to one of us it affects all of us.”

Members of the public can help at this time of year by keeping an eye out for fallen birds.  If birds are found, they should be carefully collected and placed in one of the aid stations located at Kaua’i County fire stations and other locations around the island, where they can be collected by SOS project staff.  The fall-out season starts in the middle of September and ends in mid-December.

KESRP is a joint project of DLNR’s Division of Forestry and Wildlife and the Pacific Co-operative Studies Unit of the University of Hawai‘i.  SOS is a DLNR project housed at the Kaua’i Humane Society and financially supported by the Kaua’i Island Utility Cooperative.