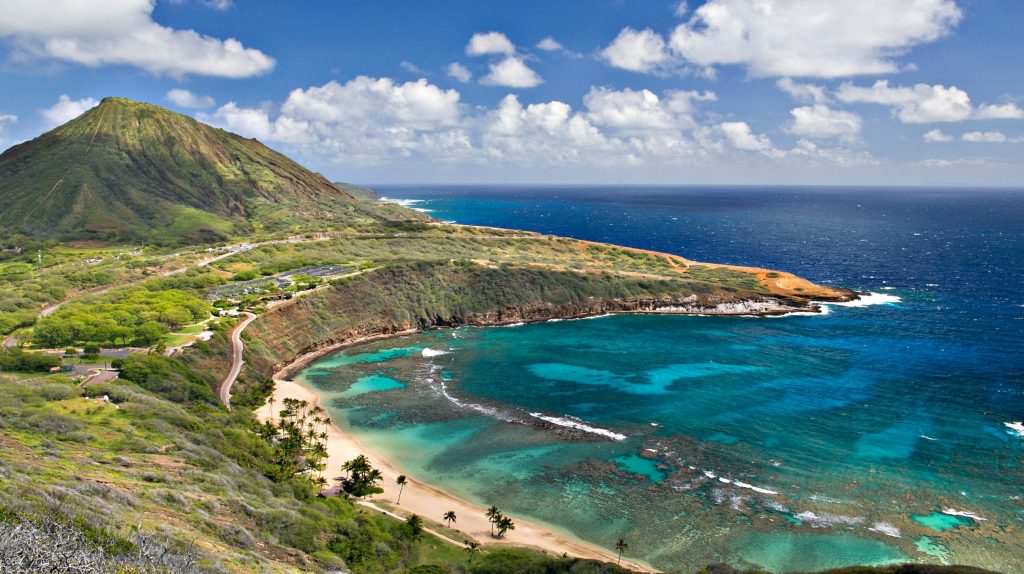 (HONOLULU) – In the early 1800’s Queen Ka‘ahumanu visited Hanauma Bay, considered one of O‘ahu’s crown jewels over the decades. In modern times more than one million people each year, from all over the world, visit the bay to take in its vast marine and coral life. They snorkel, dive, spend time tanning on the beach, and otherwise enjoy the bay’s natural beauty. Before going into the water, they are educated about the living reef environment and safety practices to help ensure their continued enjoyment of the bay. The State, through the DLNR Division of Aquatic Resources (DAR) and the Office of Conservation and Coastal Lands (OCCL); the City and County of Honolulu, through the Department of Parks and Recreation (DPR), and Ocean Safety and Lifeguard Services; the University of Hawai‘i Sea Grant Program, and the non-profit Friends of Hanauma Bay (the Friends) work together to protect the bay’s unique underwater resources and best ensure the health of fish, corals, marine mammals, and visitors of the bay.

In October 1967, the State designated the 100-acre Hanauma Bay as Hawai‘i’s first Marine Life Conservation District (MLCD). This designation made it illegal to fish or remove any marine life or other marine resources from the bay. It provided the mechanism for DLNR to have an active and formal role in the management and protection of the bay’s ocean waters. DAR biologists have been surveying fish populations in the bay since 1969. This has helped ensure the bay continues as having the largest biomass of reef fish anywhere around O‘ahu.

DLNR Chair Suzanne Case said, “We continue to explore additional collaborations with all of our partners and stakeholders at Hanauma Bay as we all have the best interests of this amazing place at heart. This includes determining the extent of human impact on the environment, including the bay’s carrying capacity and impact of certain sunscreen products.” Scientific studies have shown that certain sunscreen chemicals can destroy and damage sensitive corals.

The immense popularity of the bay, particularly with visitors, has prompted the City & County to make numerous improvements over the years. Highlights include the Hanauma Bay Education Program led by staff and volunteers with the UH Sea Grant Program; the construction of the Marine Education Center in 2001 and at the behest of the Board of Land and Natural Resources (BLNR), restrictions on the number of parking stalls to prevent overcrowding and on the volume and types of commercial activities and tours permitted at the bay.

Honolulu Mayor Kirk Caldwell commented, “If you haven’t been to Hanauma Bay in years, you really should visit again. This is a place that local folks enjoy along with the millions of out-of-state visitors who often have a trip to Hanauma Bay at the top of their “must-do” lists. We are excited about the next 50 years and look forward to our continued collaboration with the State, Sea Grant, and the Friends. Together we want to best ensure not only the protection of the ocean and its creatures, but also improve on the quality of the experience people have.”