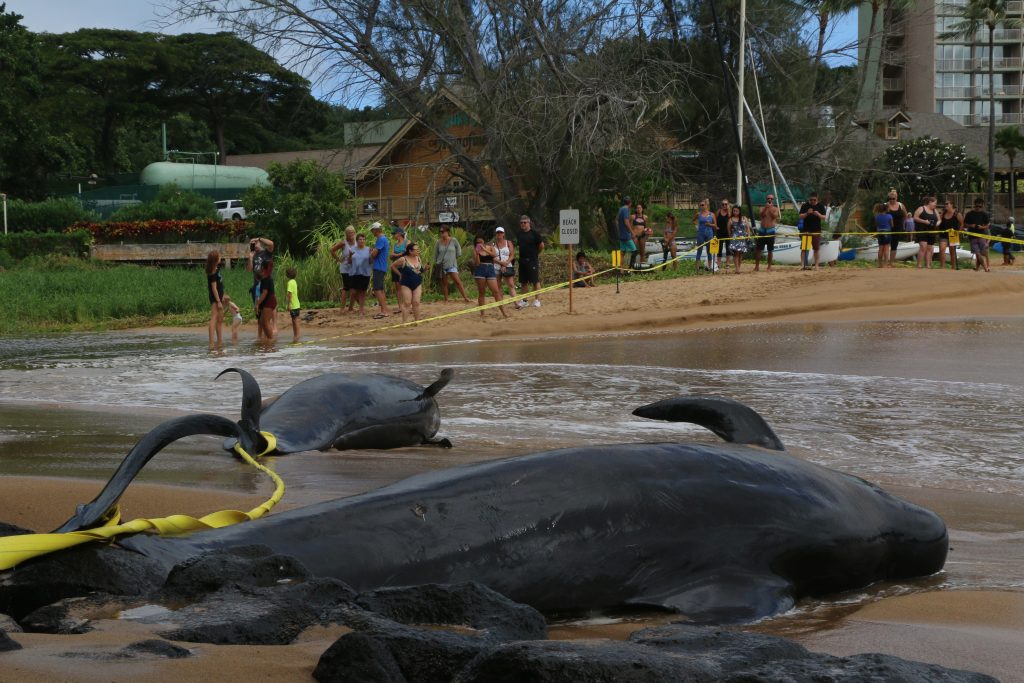 (HONOLULU) – A report released today by the United States Dept. of Agriculture’s National Wildlife Research Center (NWRC) in Fort Collins, CO shows no detectable levels of the rodenticide Diphacinone in the livers of five pilot whales that died on Kaua‘i on Oct. 13, 2017 (two washed onto Kalapaki Beach and three were found floating in Nawailili Harbor).

Diphacinone is the anti-coagulant rodenticide used during three aerial applications in August and September to rid the State Seabird Sanctuary on Lehua Island of invasive Pacific rats.

Frozen liver samples from the whales, taken during post-stranding necropsies immediately after the mammals were moved off Kalapaki Beach, were received by the NWRC Chemistry Lab Unit on Nov. 6th. Three preparations of each whale’s livers were extracted and analyzed last Thursday. No “observed concentration of Diphacinone” was detected in any of the 15 samples.

The Dept. of Land and Natural Resources (DLNR), NOAA’s Pacific Islands Regional Office, and the University of Hawai‘i cooperated in the necropsies (post-mortem examinations) conducted on the pilot whales and so far have been unable to determine a conclusive cause of death.  Additional testing continues.

Since the final drop of rodenticide on Lehua in early September, continued monitoring has shown no presence of the tiny, invasive rats. They’ve been responsible for the decline and/or destruction of endangered sea bird populations on the small island West of Kaua‘i. However, the partners of The Lehua Seabird Restoration Project have stated that they cannot declare the island “completely rat free,” until one year after the final rodenticide application.

“We remain hopeful that the rat removal project will be declared a success in 2018. As conservationists committed to preserving wildlife, we were deeply saddened by the October Pilot Whale mortalities. We are heartened by today’s announcement, which reaffirms the body of science suggesting rodent removal projects can be done with little to no risk to marine mammals.” said Dr. Patty Baiao, Hawai‘i Program Director for Island Conservation, the not-for-profit conservation organization that assisted DLNR and other partners with the invasive rat removal project.