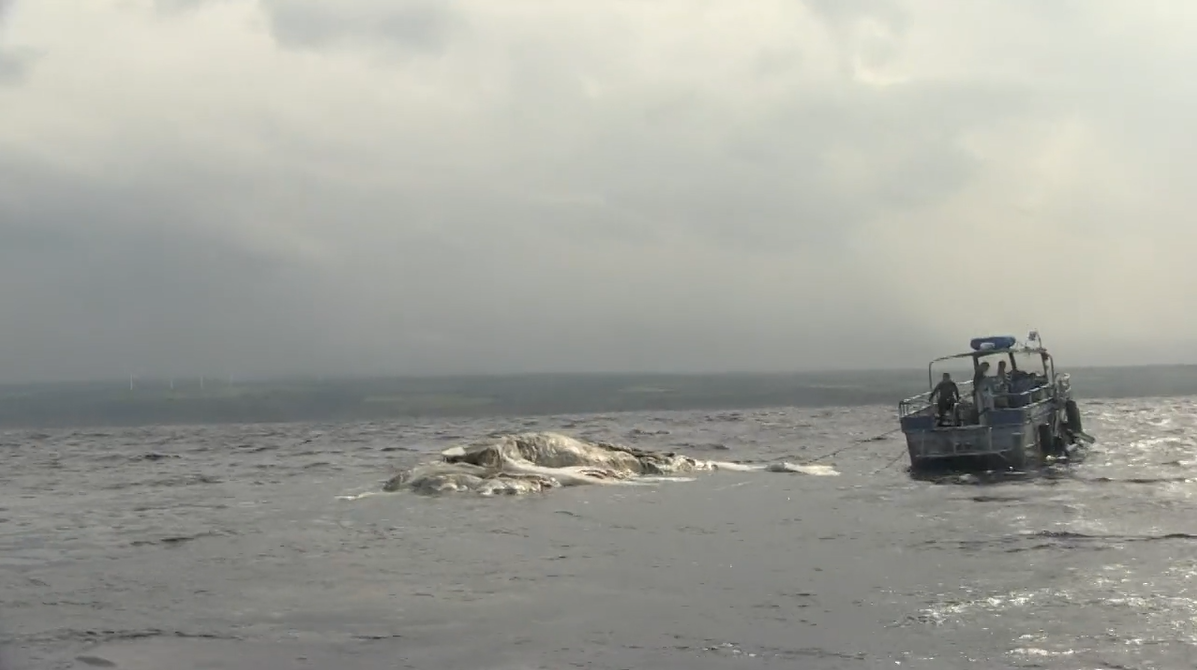 Update: Tuesday, December 26, 2017 at 5:17 PM
Due to deteriorating weather conditions the whale could only be towed to eight miles offshore.

(Haleiwa, O‘ahu) –  The badly decomposed carcass of a Humpback whale that nearly washed on shore at Haleiwa on Christmas Day, is in the process of being towed out to deep ocean waters this afternoon. A private dive company, One Ocean Diving, first towed the carcass away from Haleiwa on Sunday and today volunteered to go ahead and tow it further offshore.  Yesterday the remains were towed three miles offshore by one of the company’s boats and this afternoon, based on drift pattern modeling provided by the U.S. Coast Guard, it was towed an additional ten miles offshore, due north of Haleiwa.

David Schofield, NOAA’s marine mammal response coordinator went to the tow boat to discuss the operation with principals of One Ocean Diving. He commented, that in many whale carcass situations, the federal and state government have to tow them or hire a private company to do the work. Due to the special circumstances involved, NOAA and DLNR gave One Ocean permission to complete the offshore tow.  Schofield added, “Based on the level of decomposition I think this whale died about two weeks ago.  It was a small adult Humpback and again, due to the condition of the carcass, it will be impossible to determine how it died.”

Last winter six Humpback whale carcasses washed ashore or into near-shore waters.  This is the first reported carcass of this season.

DLNR Chair Suzanne Case said, “We deeply appreciate the efforts of the crew from One Ocean Diving who conducted the initial tow yesterday and the final tow today, at no cost to the State, the federal government or taxpayers.”