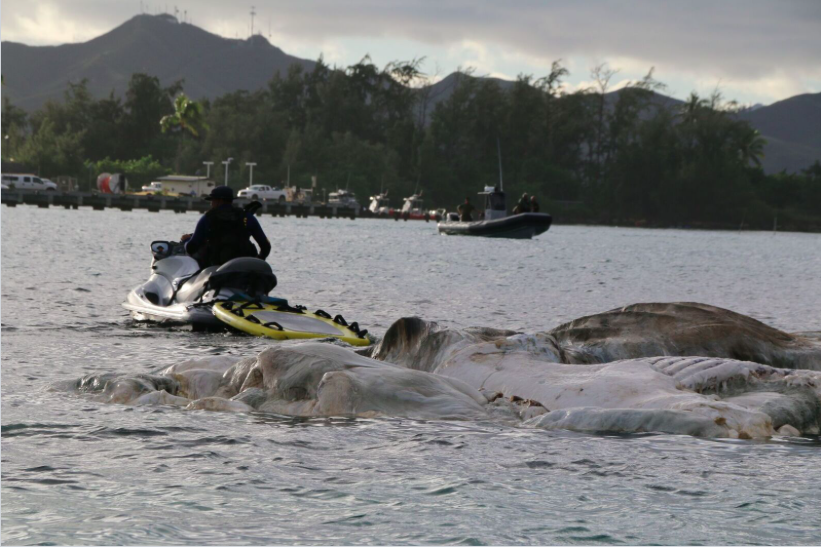 (KANEOHE) – The carcass of a three and a half ton Humpback whale that stranded on a reef just off of Marine Corps Base Hawai‘i (MCBH), was successfully removed today. It’s believe the carcass may be the same one spotted off Haleiwa earlier in the week.  In Kaneohe Bay the carcass split into two major pieces, with the whale’s skull sticking out of the water a short distance from the main carcass.

On Friday, DLNR in collaboration with MCBH, the National Oceanic and Atmospheric Administration (NOAA),  UH’s Hawai‘i Institute of Marine Biology (HIMB) and local salvage experts decided rather than trying to tow the carcass far out to sea for a second time, it was best to bring it to shore.  A private dive company towed a Humpback carcass to eight miles off the north shore the day after Christmas. If indeed it is the same carcass, ocean currents brought it into Kaneohe Bay late on Thursday. Officials felt since sharks often feed on whale carcasses, to protect the public, it made sense to get it out of the water as soon as possible.

This morning the salvage vessel Ho‘Okupu operated by Cates International arrived at MCBH shortly after sunup. With support from DLNR Division of Conservation and Resource (DOCARE) officers on jet skis and in a boat, the crew of the salvage boat lassoed the tail of the carcass.  After removing an anchor that held it in place overnight, the boat slowly towed it into shore and to a base boat ramp. A short time later a DOCARE jet ski brought a large portion of the jaw to shore, followed by the Ho‘Okupu transporting the main part of the skull in.  The DOCARE jet ski then brought in another piece of the whale’s skull. 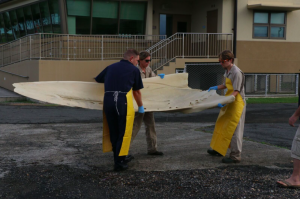 Coincidentally the HIMB Cetacean Stranding Lab is located at MCBH – mere steps away from the boat ramp.  Dr. Kristi West, who runs the lab, says this is the first cetacean that died and ended up so close to where a large team of students and volunteers have begun the long process of conducting a post-mortem examination.  Given the extent of decomposition Dr. West feels it’s unlikely they’ll be able to determine the cause of death.  She said however, “We will look at it piece-by-piece and look for any signs of vessel strikes or bone disease. Though it’s unlikely we’ll get a cause of death, we do learn from each one of these necropsies.” Her lab conducts about 20 post-mortem exams annually from cetaceans that die anywhere around the state. She expects the examination to last well into the night. 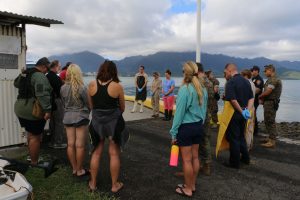 Prior to the examination, cultural practitioner Walt “Kahele” Mix conducted protocol to recognize the whale’s place in the ecosystem and the species importance to native Hawaiians.