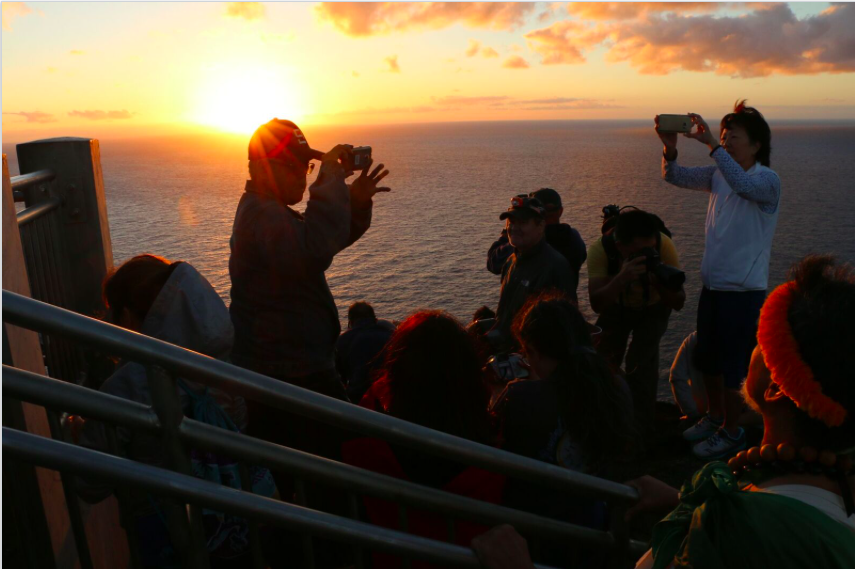 (Ka’iwi State Scenic Shoreline, O‘ahu) – Under a nearly full moon, with the temperature right around 70 degrees, clear skies, and the promise of a spectacular sunrise on the first day of 2018, hundreds of people made the relatively short walk to the Makapu‘u Overlook at the Ka‘iwi State Scenic Shoreline in East O‘ahu. This was the seventh First Day Hike put on by the DLNR Division of State Parks and is considered one of the largest and certainly most unique hikes that occur on New Year’s Day in state parks all across the country. 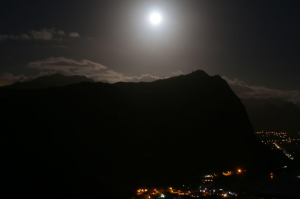 While many participants in mainland states were bundled up against cold temperatures and snow, only light jackets were needed at the Hawai‘i hike.  Most people gathered at the lookout well before sunrise at 7:09 a.m. to watch an enormous moon set over the sea cliffs above the Makapu‘u-Kaupo shoreline.  Some have made this annual pilgrimage every year since Hawai‘i joined the First Day Hikeprogram, one year after its inception.

Few other states can claim the natural spectacle provided by the birds-eye view of the rising sun over the Pacific combined with a multi-cultural celebration of the New Year.  State Parks Administrator Curt Cottrell has organized Hawai‘i’s First Day Hike since its beginning. From rather modest beginnings it is now on the repeat bucket list for many local folks and visitors from all over the world.

Cottrell said he doubts other states are able to combine the sheer natural beauty of their parks with recognition of cultural diversity.  Gabriel Spencer blew a pu in all four cardinal directions at the very moment of sunrise, followed by a native Hawaiian chant from Halau Mele.  Then a pair of bagpipers from Celtic Pipes and Drums of Hawai‘i performed, followed by young Taiko drummers from the Taiko Center of the Pacific.  Cottrell remarked, “The celebration of our local host culture, combined with Asian and European cultures in such an amazing setting really does give you chicken skin.  No one ever walks away from our First Day Hike disappointed.” While exact crowd numbers are hard to get, it’s estimated as many as 500 people made the hike this year.