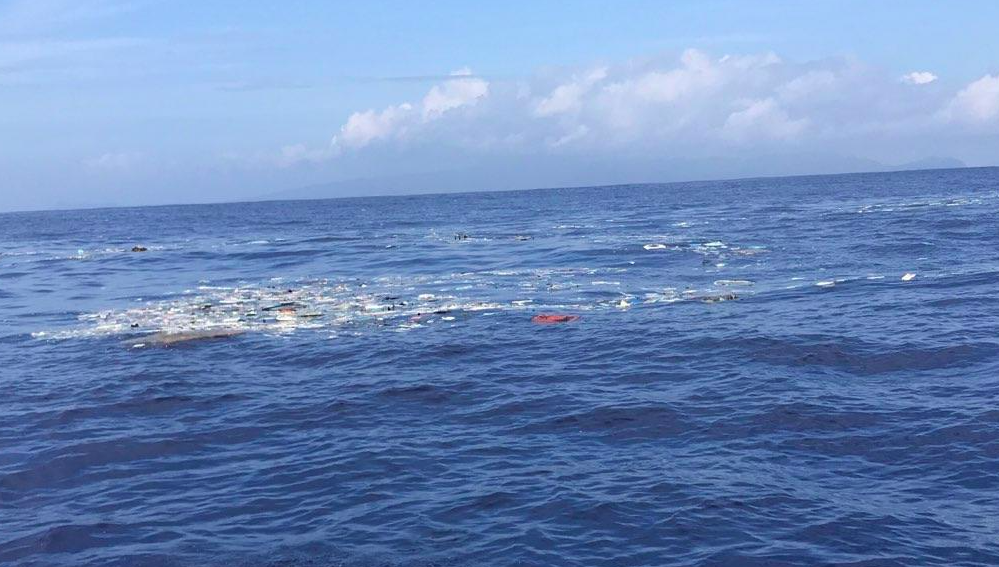 (HONOLULU) – State and Federal agencies are tracking what is described as a very large marine debris field or net mass last spotted in the Ka Iwi Channel between Moloka‘i and O‘ahu, about 12 nautical miles south of O‘ahu. The marine debris was first reported by a fisherman last Saturday, who saw it 9.5 miles south of Koko Crater and 3.5 miles from penguin banks. The fisher described it as being two nautical miles long and containing massive amounts of nets, ropes, buoys, crates and drums.

The initial sighting has been confirmed by several other sources, including the U.S. Coast Guard (USCG) Cutter Oliver Berry which passed through the debris field last night. The possible path or trajectory of the mass is being tracked by Dr. Nikolai Maximenko and his team at the International Pacific Research Center at the School of Ocean & Earth Science & Technology (SOEST) at the University of Hawai‘i at Manoa.  Maximenko told agency representatives during a conference call this morning, “As the currents in Hawaii are complex and dynamic we don’t have a good understanding of their effect on debris of this scale. We are working with the Coast Guard to add a tracker to the debris to gather more data to aid our modeling.” At the moment, the field appears to be on a northeastern trajectory away from land, although it is possible some of it has made landfall on the western shore of Moloka‘i. DLNR staff will be conducting a shoreline survey to locate and address any debris found there.

In addition to the UH researchers and the USCG, NOAA’s Marine Debris Program and National Marine Fisheries Service, the DLNR Chair’s Office and Division of Boating and Ocean Recreation (DOBOR) are partnering to address this marine debris field. DLNR, through its contacts has alerted recreational fishers and commercial shipping representatives to report sightings and gather data on this collection of marine debris. LCDR John Titchen is leading the Coast Guard’s efforts to assist in this matter. He said, “We have issued a broadcast notice to mariners (identifying hazards to navigation) that may be passing through the area and we encourage due caution. These types of fields can create entanglement and fouling hazards.”  He added, “Based on our initial observations this appears to be more of a weed line than a debris field, containing a 40-60-foot wooden pole with marine growth, plastic bags, weeds, and other assorted debris; nonetheless boaters need to be aware of it and avoid it.”

A decision on whether to try to capture the debris depends entirely on its movement over the next few days.  If it does make landfall DLNR and its partners will work to remove it.  If it remains in the ocean and appears to be coming close to land it would likely take a large vessel with heavy-lift crane capability to capture it. Since there seems to be a concentration of marine life in and around the debris, the partners involved in managing this issue will have to weigh the impact on marine life before conducting any harvesting or removal effort.  Mark Manuel, the Pacific Islands Marine Debris Regional Coordinator for NOAA’s National Ocean Service, noted, “We often see similar debris accumulation along shearlines when conditions are just right.  Most often the accumulations disperse on their own. This does remind us to not contribute to the global problem of marine debris by recycling and disposing of rubbish in the proper manner.”

In recent weeks, crews from DOBOR and the DLNR Land Division have cleaned up tons of derelict fishing nets and other debris on beaches across the state.  DLNR Chair Suzanne Case said, “Their work has been supported by volunteers and many of the non-profit organizations who focus on keeping beaches clean and litter-free. Unfortunately, this is a problem that’s not going to go away easily or soon.  We continue to encourage people who see marine debris, whether it be in open water or on the beach, to report it to NOAA and DLNR marine debris hotlines and websites, (listed below).”

Marine debris not only creates potential navigational hazards for ocean vessels – it can cause significant damage to coral reefs and sometimes contains aquatic invasive species that when they reach shallow waters, can colonize an area and spread very rapidly.