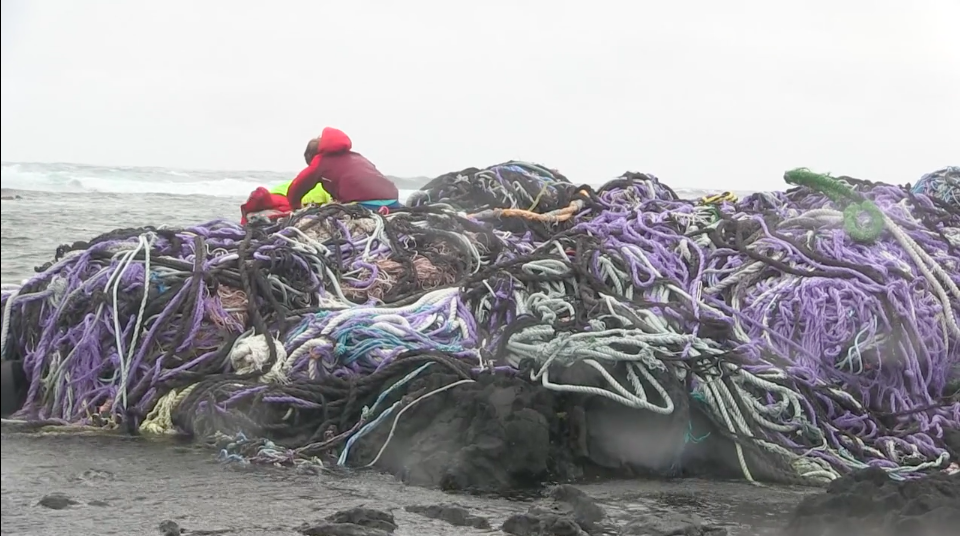 (HILO) – A week ago, University of Hawai‘i researcher Sarah-Jeanne Royer was photographed standing on an enormous tangle of derelict fishing rope embedded on the lava rock coastline of Kamilo Point on Hawai‘i island’s far south-east side.

Yesterday, Royer and volunteers from the Hawai‘i Wildlife Fund were back at Kamilo; nicknamed ‘Plastic Beach’ for its long history of being ground zero for ocean-born marine debris. The rope mass washed ashore in late January and when Royer, with the International Pacific Research Center (IPRC) at UH’s School of Ocean and Earth Science and Technology (SOEST), first viewed it, she figured it weighed about 40 tons. On her second visit she observed, “I think over the past week either a big wave or major tide came up and took part of the mass back out to sea – or over time it’s just started settling close to the ground.  It’s difficult to know, but it does seem a little smaller.”

The Kamilo Point mass is demonstrative of the unprecedented arrival of large collections of marine debris to Hawai‘i this year. Over the past month DLNR has removed or funded the removal of eight derelict fishing net/rope masses from nearshore waters and various shorelines.  Clifford Inn of the DLNR Division of Boating and Ocean Recreation is responsible for coordinating the agency’s marine debris response activities.  He said, “I’ve been involved in monitoring and managing marine debris across the main Hawaiian Islands for at least a decade and during that time I’ve never seen such a large accumulation of net masses.”  DLNR works closely with other government agencies and volunteer beach clean-up groups to try and keep up with reporting and clean-up of marine debris.  Inn adds, “We encourage people to report marine debris to our hotlines and websites (listed below), but we want people to understand that unless it is an emergency situation, in which there is a threat to public safety or hazards to mariners, it may take some time to remove the debris.”

Royer is part of Nikolai Maximenko’s group at IPRC and one of their scientific objectives is to track the movement of marine debris. This is very challenging. In a vast ocean full of debris, it is extremely difficult to track. Without putting GPS trackers on them, predicting their movements is impossible.

Asked to explain why Hawai‘i is experiencing an unusual influx of large tangles of debris this winter, Royer explained, “It is because of weather conditions and ocean currents.  Some of this debris was probably caught up in the North Pacific Gyre, euphemistically called the ‘North Pacific Garbage Patch’, for months if not years.  The gyre is spitting out this stuff and it’s ending up on our shores.”  Based on debris that’s had identifying marks or lettering, it’s believed much of it originates in Asia.  Some debris from the Japan tsunami of 2011 continues to show up in Hawaii, but over time that amount seems to be declining.

Back at Kamilo Point, Bill Gilmartin of the Hawai‘i Wildlife Fund and another volunteer collected ropes and nets that had already washed onto the beach.  The non-profit organization has been removing debris here for the past 15 years and estimate they’ve removed and transported more than 231 tons of debris. Derelict fishing gear tends to be the most obvious debris because it’s big, but the beach here is littered with all sizes, shapes, and types of plastics. That, Gilmartin pleads, “should be enough for all of us to consider our use of plastics and employ the 5 R’s: Refuse, Reduce, Reuse, Repurpose, Recycle.”  There’s such an incredible amount of junk in the ocean it’s hard to think it will ever be completely cleaned up.  But we can all do our part now, not to add to the problem.

DLNR is investigating how to remove the rope mass at Kamilo Point. Based on Royer’s and Gilmartin’s assessments, given the weight of the water-logged jumble, it will be extremely difficult to pull it off the ragged lava coastline and the help of many will be necessary to complete this mission.