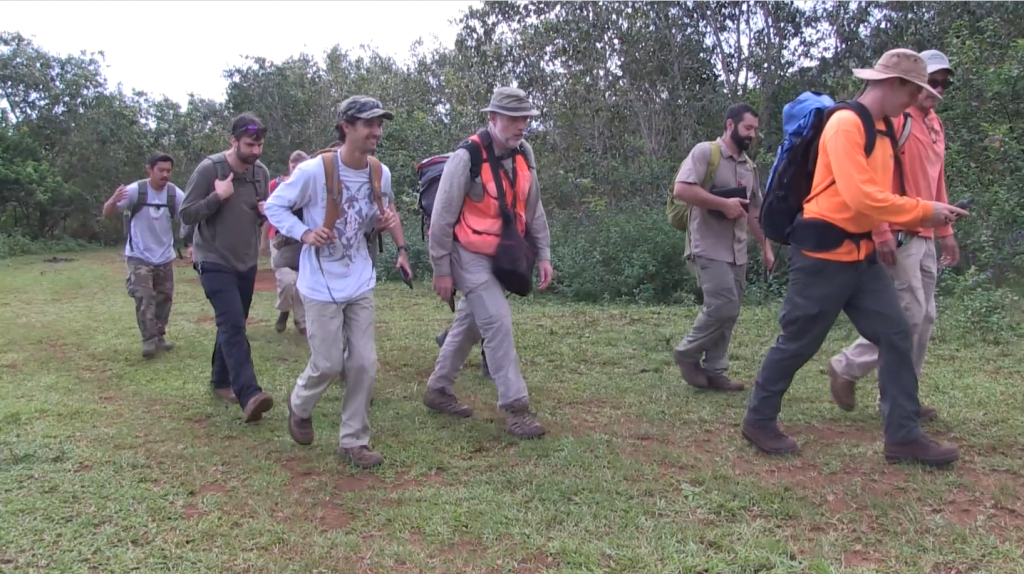 (HONOLULU) – A rapid response team of experts from state and federal agencies and non-government organizations formed over the last week to investigate the deaths of several ʻōhiʻa trees in the Moloa‘a Forest Reserve on Kaua‘i’s northeastern side.

Kaua‘i DLNR Division of Forestry and Wildlife (DOFAW) botanist Adam Williams discovered at least five trees in the remote, rugged forest reserve that appeared to be dead from symptoms associated with what has been called Rapid ʻŌhiʻa Death or ROD.

This find set into motion the rapid response over the past week which has included drone and helicopter survey mapping flights, laboratory confirmation of the presence of the fungus known as Ceratocystis huliohia (formerly called Ceratocystis “species B”) and training for Kaua‘i-based  teams on how to identify the fungus and sample for it.

According to the lead researcher from the USDA Agricultural Research Service (ARS), Dr. Lisa Keith, “What we are finding on Kaua‘i is a very different pathogen from the fungus killing large numbers of ʻōhiʻa trees on Hawai‘i Island.  That fungus, Ceratocystis lukuohia (formerly called Ceratocystis “species A”), is a harsh tree killer and is very aggressive.”  She explains that the Rapid ʻŌhiʻa Death moniker is a bit of a misnomer in that it does describe the Ceratocystis lukuohia (species A) pathogen, but includes the Ceratocystis huliohia (species B), which is also widespread on Hawai‘i Island and now discovered on Kaua‘i, though its impacts are much less severe and slower moving.

On Wednesday, a multi-disciplinary team from DLNR/DOFAW, Dr. Keith’s USDA lab, the University of Hawai’i’s College of Tropical Agriculture and Human Resources, the Kaua‘i Invasive Species Committee (KISC), and The Nature Conservancy (TNC) hiked into the forest reserve to get a closer look at the two trees already confirmed to be infected with Ceratocystis huliohia.

At the first suspect tree, Dr. Marc Hughes of USDA/ARS used a hatchet and saw to peel away bark from a large, multi-trunked ʻōhiʻa tree that has numerous dead limbs and leaves. He demonstrated to the other 16 team members how to spot tell-tale signs of Rapid ʻŌhiʻa Death and then how to take wood samples to send to the USDA/ARS lab in Hilo for further verification.

Dr. Wade Heller of USDA/ARS then demonstrated how to enter data into a smart phone-based field application that tracks location, symptoms, sample collection and photographs in a central data base to ensure accurate tracking of each infected tree.  After these demonstrations, field teams from KISC, TNC, and DOFAW practiced sampling on the two trees positively identified as having Ceratocystis huliohia and four other nearby trees that showed symptoms.  Overnight testing at the USDA/ARS lab resulted in confirmation of an additional three infected trees, for a total of five.

Tiffani Keanini, KISC Project Manager said, “Unlike on the Big Island, not many Kaua‘i homeowners have ʻōhiʻa trees in their yards, so there should be much less need for us to do tests and sampling  in residential areas.  We do expect to be involved in continued work to investigate and test for the potential spread of the disease in the forests of Kaua‘i.”

Added Melissa SP Fisher, Director of TNC’s Kaua‘i Forest Program, “It’s fortunate that we are only dealing with the less aggressive species of this disease. We hope everyone on Kaua‘i will be vigilant in practicing the sanitation protocols developed on Hawai‘i Island to keep both species from getting a stronger foothold on the Garden Island. We’re looking forward to working with all the partners on next steps.”

Rob Hauff, State Protection Forester for DLNR/DOFAW explained, “Those protocols include scrubbing boots and other footwear with 70% isopropyl alcohol after any forest activity and thoroughly washing any equipment and vehicles that enter or are used in the forest. This should become a best practice statewide for all forest users, since we still don’t fully understand how these fungi move from place to place. What is clear is that both species, and for that matter many tree diseases, enter trees through wounds, so it’s important not to wound them.”

Since the identification of ROD on Hawai‘i Island more than four years ago it’s affected more than 135,000 acres of ʻōhiʻa forest there, killing millions of ʻōhiʻa trees. “The extent of the infection on Kaua‘I is unknown, which is why more sampling will be done in the future,” said Sheri S. Mann, Kaua‘i DOFAW Branch Manager, “And the researchers tell us Ceratocystis huliohia could have been here for a very long-time, so there’s no evidence that it recently spread directly from the Big Island.  The initial discovery of ROD has certainly made all of our people who work in the forest more aware of what to look for and without that increased awareness we may not have found it on Kaua‘i and failed to take the steps we’re now taking to identify the extent of the infestation and how to deal with it.”