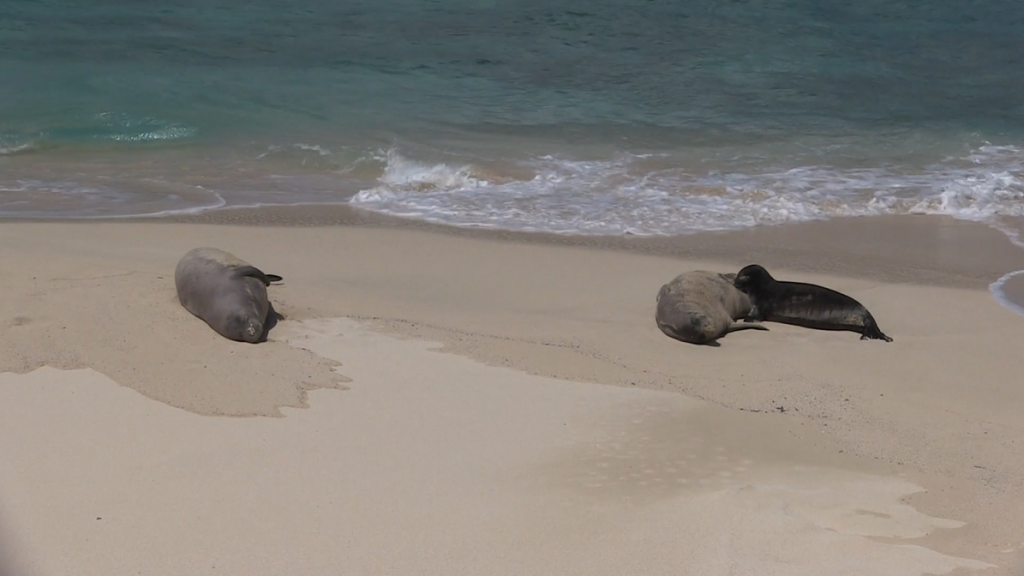 (Honolulu) – The recent deaths of three critically endangered Hawaiian monk seals on O‘ahu due to toxoplasmosis is very sad and could have been entirely preventable, according to a joint statement from the heads of the Hawai‘i Departments of Health (DOH) & Land and Natural Resources (DLNR).

Cats are the only known reproductive host of the toxoplasmosis parasite. It reproduces in the feline digestive system.  Once released into the environment, these eggs can infect other animals, including humans, both on land and in the ocean. Toxoplasmosis parasites create cysts in muscle and organ tissues and can cause inflammation of the heart, liver, and brain.

Health Director Dr. Bruce Anderson explained that the parasite that NOAA veterinarians found caused the deaths of the seals is far more impactful than just killing seals.” In addition to impacting marine mammals and wildlife, toxoplasmosis is a risk to humans. It is known to cause serious problems for pregnant women and their unborn children,” Anderson said. “During pregnancy, infection by the toxoplasmosis parasite can damage the unborn child, causing miscarriages, stillbirth, or substantial birth defects including enlargement or smallness of the head.

For healthy individuals, symptoms and signs of toxoplasmosis infection are most often benign because a healthy person’s immune system usually keeps the parasite from causing illness. Very few people will have symptoms similar to the flu and most people probably do not know they have been infected. The Centers for Disease Control and Prevention estimates that approximately 10 percent of the population in the U.S. six years of age and older have developed antibodies to the parasite from a past infection. However, for those with compromised immune systems, those undergoing chemotherapy or with AIDS, and for pregnant women the disease can be very serious.

“The only thing certain about toxoplasmosis is that there are far more cases in humans and more deaths in seals, dolphins, native birds and other animals today than are recognized and reported,” said Anderson. “Since cats are the only animal that transmit the disease, it only makes sense that reducing the number of feral cats will reduce the risk of infection and serious illness or death,” Anderson added.

DLNR Chair Suzanne Case, is again encouraging people not to feed cats and other animals near water. “In addition to preying on native wildlife, cats pose a significant health risk to people, marine wildlife and birds,” Case explained. Toxoplasmosis can also infect Hawai‘i’s native birds, including the nēnē and the newly released Hawaiian crow, the ʻAlalā.

“Feeding cats near water obviously increases the risk of transmission but, given the nature of the watersheds in Hawai‘i, cats almost anywhere are probably contributing to the problem,” Case said. “The cysts can live for months in soil and can wash into streams and runoff and be carried into the ocean from almost anywhere. Feeding cats at state parks, boat harbors and other coastal areas increases the risk of transmission because the cysts don’t need to travel very far to get into the ocean.” Case added, “Frankly, feeding cats anywhere where their feces can ultimately wash into the ocean is a problem.”

One of the seals, RK60, killed by toxoplasmosis gave birth to a pup on Moku Iki off shore from Lanikai in the spring of 2017. This seal and her pup moved to Moku Nui and were featured in a safe wildlife viewing video produced by DLNR and shown over the past year to thousands of people who rent from Kailua kayak rental firms (see video link below).

In Hawai‘i, the National Oceanographic and Atmospheric Administration has recorded at least eleven Hawaiian monk seal deaths that are attributable to toxoplasmosis infection since the first confirmed deaths in 2001. Spinner dolphins are the only other marine species that have been documented as dying from toxoplasmosis in Hawai‘i, but there are many other marine mammal species around the world that have also been affected and infections have been linked to the marine food web. This, according to Case and Anderson, should be enough to prompt people to stop feeding feral cats near any bodies of water.

“With only an estimated 1,400 Hawaiian monk seals still in existence, we simply cannot afford to lose even one of these critically endangered mammals to a disease that is preventable. We hope people will provide as much love to our few very special seals as they do to the hundreds of thousands of feral cats around our islands,” Case said.