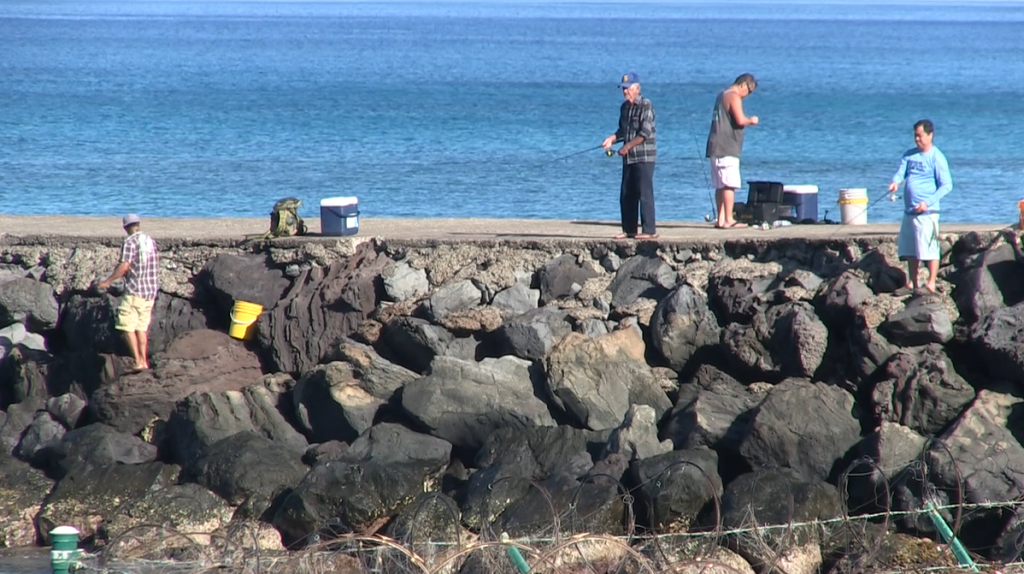 (Honolulu) – When it comes to food, Hawaiian monk seals behave much like dogs.  Feed them once and they’ll come back for more.  That’s one of the messages the DLNR Division of Aquatic Resources (DAR) and NOAA’s National Marine Fisheries Service (NMFS) is relaying to fishers who frequent the small bay adjacent to the Kahe Power Plant on O‘ahu’s Wai‘anae coast. 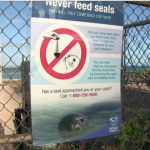 Recently at least three seals have been seen in the bay looking for food and reports indicate some anglers have provided them with the scraps of a fish that a seal tried to take off a hook.  Angela Amlin, the Hawaiian monk seal Recovery Coordinator for the NOAA Pacific Fisheries Office explained, “A seal that gets food from one fisherman will then try to poach from other hook and line fishermen or spear fishermen, impacting everyone’s fishing experience. Fishermen can help each other by not feeding seals.”  It’s also important to know that feeding a seal, or attempting to feed a seal, (or any wild marine mammal), is prohibited under federal law. This is why, this week, NOAA Fisheries put up a seal safety sign at the entrance to the Kahe fishing area and are stepping-up outreach to fishermen.

Yesterday Amlin and a colleague walked the sea walls around the Kahe fishing area and stopped to talk to fishers.  They explained the dangers of seal-human interactions and asked fishermen to take a break for a few minutes when a seal is in the area.  Amlin said, “Hopefully the seal gets bored and moves on.  If the seal does get your bait or part of a catch, don’t throw it back into the water as that becomes an incentive for a seal to keep coming back.”

“We rely on calls from the public to understand where seals are, how many there are, and how people and seals might be interacting,” said Amlin.  “If you see a seal while fishing, or a seal takes your bait or catch, and especially if you think a seal might be hooked – please give us a call on the statewide Marine Animal Stranding and Entanglement hotline: 1-888-256-9840.”

When someone calls the hotline, it triggers an immediate response by trained personnel.  They make sure the seal is not hurt by a hook and help fishermen with tools, information and guidelines to prevent future hookings.  All anglers are encouraged to use barbless hooks to avoid seriously injuring a monk seal.

Brian Neilsen, Acting DAR Administrator concluded, “While we’re focusing on the situation at the Kahe Power Plant fishing area, this advice if applicable to anywhere around Hawai‘i. It’s particularly good advice to fishers who stay in one place for extended times.  When a seal is in the area, take a break, and hopefully it will move on and avoid any encounters with you or any other people.”