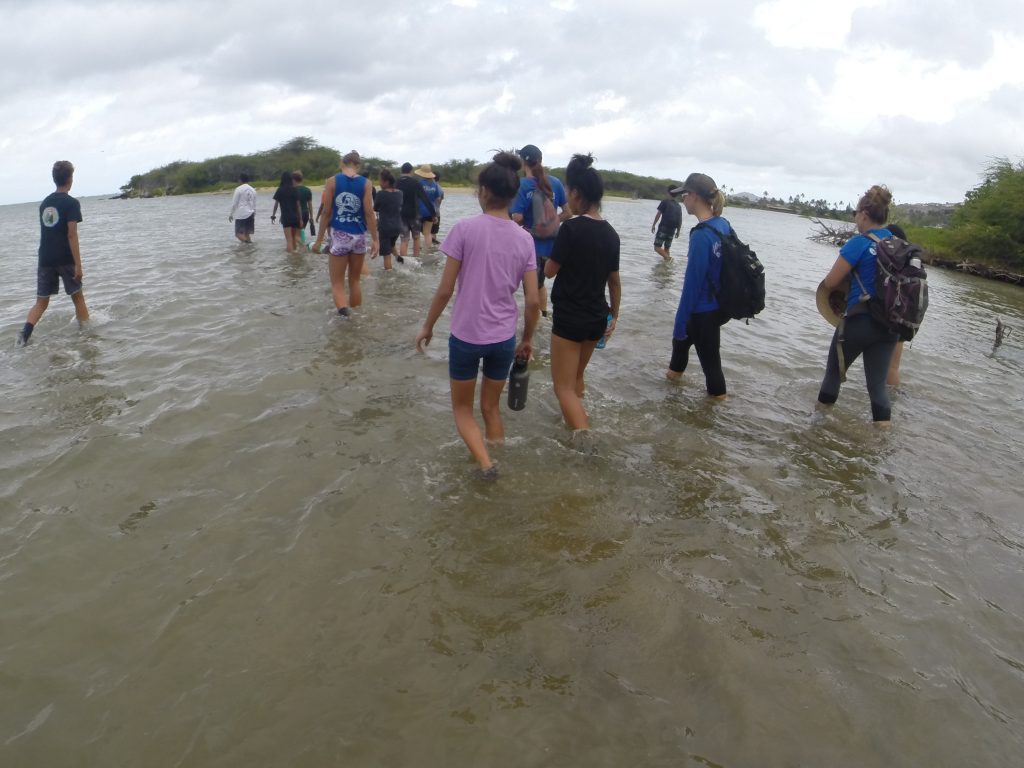 Yesterday the teens gathered at the Paiko Lagoon State Wildlife Sanctuary in East O‘ahu for their eighth day of field experiences, hands-on-learning, and community service. Ati Jeffers-Fabro, DOFAW Wetland Coordinator explained, “We rely on a lot of community support and volunteers to maintain and improve the ecosystem at the only wildlife sanctuary between Pearl Harbor and the east side of the island. We really want to impress on these young people how vital it is, in a heavily urbanized area like Honolulu, to preserve these environmental gems.”

After wading across the lagoon to a beach on the Maunalua Bay side, the group spent time removing invasive algae which has impacted the lagoon and the bay for decades. This is a continuation of years of efforts by various groups to try and keep the invasive species under control. It’s hoped this will help develop a sense of environmental stewardship in the youth as they reach adulthood.

While none of the campers are old enough to participate in Kupuʻs other programs, several have expressed interest in joining the ranks of some 4,000 young people who’ve worked on projects and programs across the islands. “Doing their small part here at Paiko Lagoon,” Jeffers-Fabro said, “hopefully gives these kids a real sense of how virtually everything people do mauka to makai can have an impact on our natural environment…unfortunately most of those things have negative consequences on plants and animals.”

It’s not all work and no play.  In addition to service learning, hands-on activities and projects, the campers get a chance to hike, camp, fish and learn archery.  In addition to the visit to Paiko Lagoon and Maunalua Bay the camp has programs at Kawainui Marsh, Ka‘ena Point Natural Area Reserve,  Ho‘omaluhia, Makiki Wai and Pahole. This was the second session of the 2018 camps; the first was held in June.