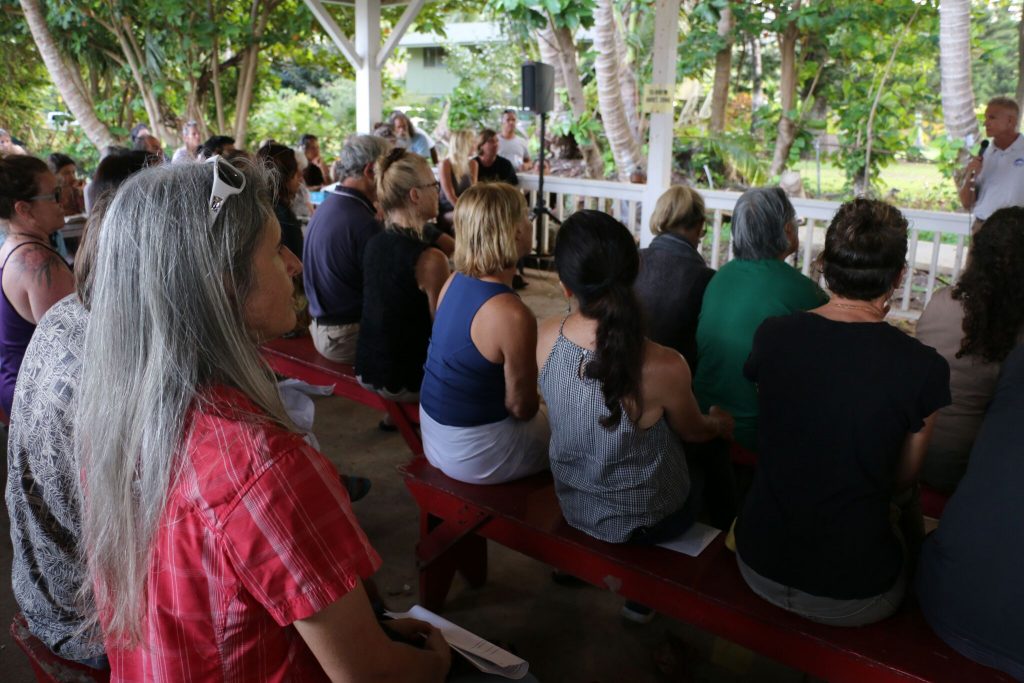 (Hāʻena, Kaua‘i) – Representatives of four State of Hawai‘i Executive Branch departments provided more than 200 Hāʻena and Wainiha area residents with updates on current and planned construction work, the upcoming school year and mental health resources during a community meeting last night.  The standing-room only crowd at the YMCA’s Camp Naue received reports from the Dept. of Transportation (HDOT), the Dept. of Land and Natural Resources (DLNR), the Dept. of Education (DOE), and the Dept. of Health (DOH). The community outreach forum was organized by Governor Ige’s Office of Constituent Services.

The meeting was intended to update people impacted by April’s historic flooding which severely damaged the region’s only highway, left two state parks closed and has made access in and out of the area extremely challenging, compounding resident’s feelings of both weariness and wariness.  After presentations from each department community members then met with representatives to learn more. Following is a brief synopsis of each department’s report to the community:

HDOT representatives revealed an updated draft schedule for daily vehicle convoys between Hanalei and Wainiha. Dill and Sniffen explained that the agency continues to explore options and refinements to the limited local access convoys.

Construction work continues to fully reopen Kūhiō Highway. 15 landslides covered it during the storm and there are two primary repair sites near Wainiha.  They also discussed the need to upgrade or replace the Waikoko, Wāipa and Wai‘oli bridges which show signs of significant deterioration.  HDOT plans to rehabilitate the Wai‘oli Bridge instead of replacing the original concrete one built in 1912.  After repairs or replacement the bridges will still be one lane in much the same alignment as before and retain the character of the existing bridges.

HDOT leadership reiterated that they are still targeting the end of October for reopening the highway.  Significant work continues to reconstruct the roadway embankment, restore guardrails and add safety improvements such as signing and striping.  To complete the work HDOT informed community members that three to six weekend road closures are anticipated and during those times a shuttle/ferry system will be implemented using a small boat to get people over Waikoko Stream.

Department of Land and Natural Resources

Both Hāʻena State Park and Napali Coast State Wilderness Park at the end of Kūhiō Highway have been closed since the flooding.  Storm waters destroyed the parking lot that serves both parks, increased the potential for rocks falling on pedestrians, damaged and destroyed the park’s waterline which has left comfort stations, showers, and the water fountain at Ke‘e beach inoperable.

Cottrell explained that repair work begins next week and the DLNR Division of State Parks is coordinating closely with HDOT to try and reopen both parks shortly after the highway reopens. In the meantime, Cottrell assured community members, “Hāʻena State Park will remain open to local residents.”  Since the bathrooms in the park are closed due to the lack of water, he asked local folks to kōkua and indicated State Parks is working to secure portable toilets until work is completed.  He also revealed plans to add more staffing for the parks and the associated restoration of two disused cottages for offices.  Additionally the dirt parking lot was severely damaged and it will be repaired and resurfaced, and the pedestrian route from the lot to Ke’e Beach and the Kalalau Trailhead will be realigned away from a dangerous rock fall area to a new boardwalk that crosses through a taro loi.

Ultimately, DLNR State Parks recognizes that many community members would like to see the establishment of a permanent shuttle system as a way to better control the number of people in the parks at any given time.  Cottrell said the repairs and improvements will allow for the future consideration and implementation of such a system.  State Parks is scheduling a blessing for the construction work, which he hopes will be complete by November.

One of the major challenges for Ha‘ena families has been getting their keiki to and from school in Hanalei.  DOE reported that 66 students live in the area.  Arakaki said that bus service will be available for students when school begins on August 6 and the pick-up schedule is being worked out.  The department has worked closely with HDOT to set a convoy schedule that allows students of various ages to catch buses at times that are convenient for them and their parents.

After the flooding, DOE opened a satellite campus for students due to the closure and limited access through the Waikoko/Wainiha area. Arakaki announced that for at least the first quarter of the new school year, DOE is re-establishing this satellite campus and they are in the process of hiring teachers.

Some community members have inquired about the possibility of setting up a charter school in Hāʻena.  Arakaki explained that while the charter schools are within the public school system, the Hawaii State Public Charter School Commission has responsibility for establishment and control of this type of school.

The DOH’s Cooper and Rapozo told the community that 90 days after the flooding, individual, family and community mental health is as important as ever.  They discussed the multitude of resources available to people who may be feeling frustrated or anxious and may need support. The pair explained that their branch provides adult services, while another DOH branch helps children, and the department maintains a 24-7 crisis line.

Cooper explained that DOH is attempting to secure funding to forge a partnership in Hā‘ena with Child and Family Services, which has been providing non-stop services over the past three months. The DOH also reminded people that other mental health help includes their family physician and insurance company to help guide them toward therapy resources.

They encouraged everyone to recognize the signs of stress and distress and to not think twice about seeking help.  They also reminded residents that their children can be negatively impacted by the initial flooding event and continuing disruption to their lives.