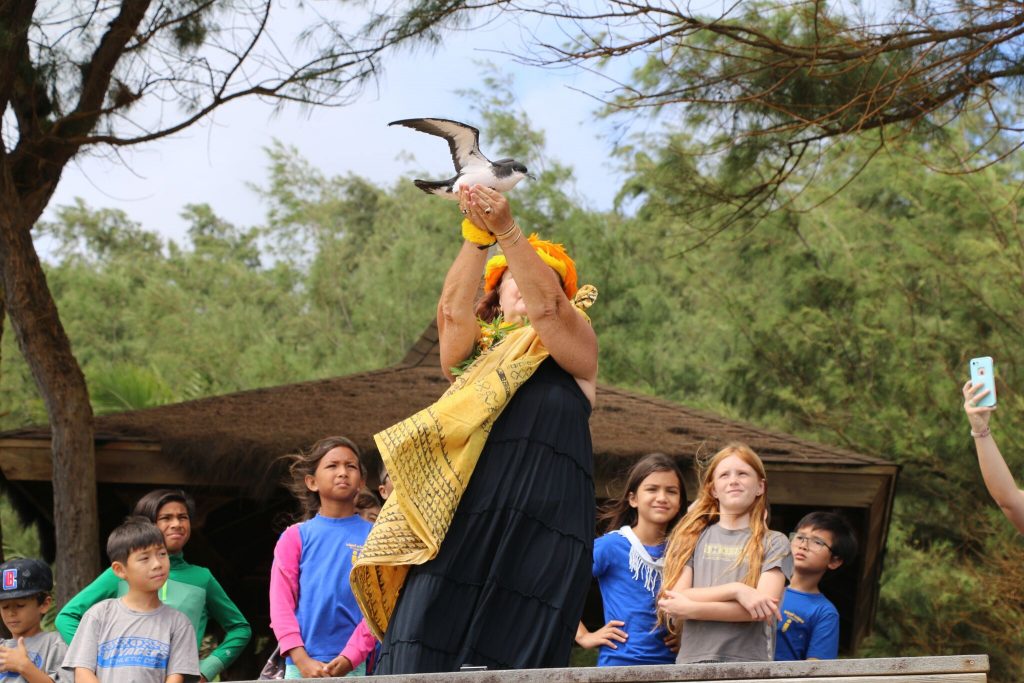 (Lihu‘e)  – School children from Kalaheo Elementary School and Island School helped release ten fledgling ‘A‘o (Newell’s Shearwaters) over the last two days during the annual E Ho‘opomaika‘i ‘ia na Manu ‘A‘o (A Cultural Release of the Native Newell’s Shearwater) event at Lydgate Park.  The young seabirds had been rescued by people then rehabilitated by Save Our Shearwaters (SOS). Before they started their journey back out to sea, Kupuna Maureen Fodale offered a pule (Hawaiian prayer).

The event is organized every year by the Kaua‘i Endangered Seabird Recovery Project (KESRP) and SOS to celebrate Kauai’s rarest native seabirds. Project Manager Dr. André Raine said, “The children are always so excited to get close to these special Native Hawaiian birds. They ask lots of questions and it gives us a chance to explain why it’s important to give these downed seabirds a second chance at life. They are a key part of the ecosystem on Kaua‘i but unfortunately they have suffered significant declines in recent decades.”

Prior to their release, each bird undergoes a field health check. They’re weighed and measured and SOS staff determines whether they’re flight ready. On Monday, 40 students from Island School and their teachers watched in silent glee as six birds took flight. Many of their teachers had the honor of holding the tiny birds in outstretched hands, as they flapped their wings, as if testing their own ability to fly. Once an ‘A‘o sailed over the beach and out over the open ocean, the kids let out whoops and cheers.

As well as attending the releases, KESRP staff members Trinity Tippin and Derek Harvey had already visited the schools to talk about Kauai’s endangered seabirds. At the release site they peppered Harvey with additional questions: When is fallout season? Where do shearwaters go when they fly away?

‘A‘o chicks are attracted to artificial lights at this time of year. This phenomenon is a serious conservation threat for seabirds across the planet. Newly fledged seabird chicks are attracted to the bright lights of cities and towns. They circle them until they end up exhausted and grounded. If they are not rescued by concerned members of the public, they become easy prey for the large numbers of cats and dogs on the island or are run over by cars.  Many are never found and die of dehydration and starvation, so keen-eyed people are vitally important for rescuing the downed birds.

Rescued birds are placed in aid stations at fire stations around Kaua‘i and then each day SOS staff or volunteers gather them to take to the SOS rehab facility. The program has been inundated with birds from locations across the island over the last few days. At SOS, the birds are examined by trained staff, rehabilitated as necessary and then released to continue their lives out at sea. These are long-lived birds and can live for over 35 years if they survive the initial fledging. These remarkable birds spend up to five years flying over the open ocean and never come back to land until breeding time.

Harvey encouraged the children to teach their parents saying, “Tell your family about how special these birds are and the cool experiences you had with them today. Then they’ll want to help and when they see birds fall out, they’ll help as well.  So, I think it’s really important that we spread our love for these birds to everyone we know, because they are really, really special.”