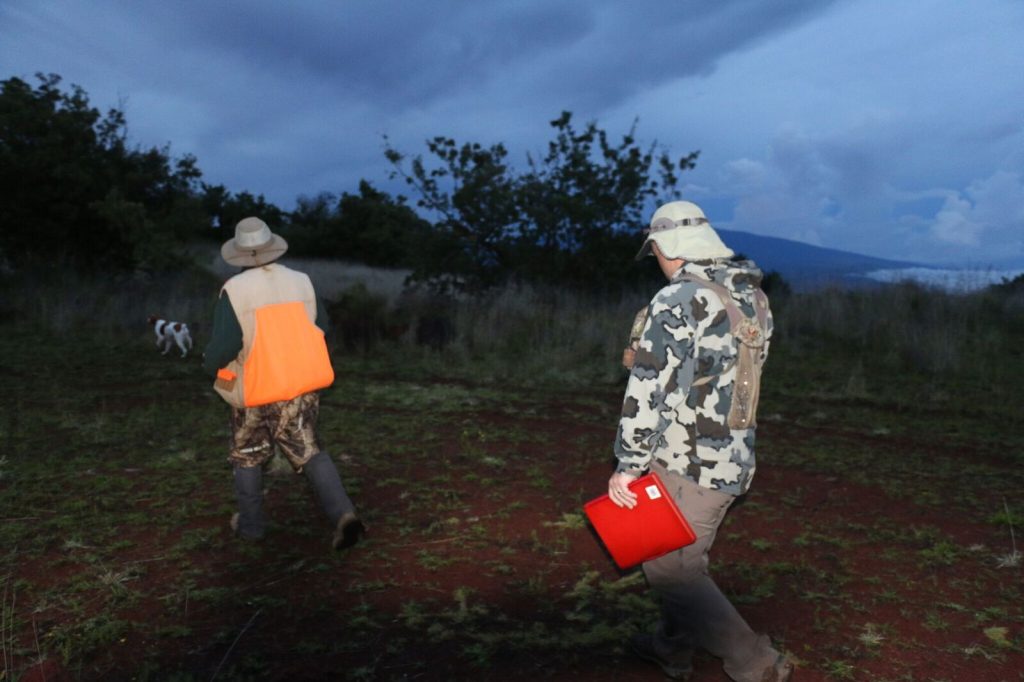 (Maunakea) – Two weeks before the hunting season for game birds opens in Hawai‘i, hunters, researchers and staff from the DLNR Division of Forestry and Wildlife (DOFAW) traipsed across the rugged terrain on Maunakea’s north slopes to gain a better understanding of game bird density, variety and populations.

They gather above the Kilohana Hunter Check-in Station at 4:45 each morning to team up, check their equipment, like GPS devices, get their dogs ready to go and to receive their “transects” assignments. Kanalu Sproat, a DOFAW wildlife biologist on the Big Island said, “We’ve done game bird counts in the past by just driving the roads looking for birds. This year with the help of hunters, this is the first time we’ve been able to put people into the field, where the hunting actually happens to get a clearer and better picture of the health of the game bird ecosystem.”

At first light, each team begins traversing the first in their series of assigned transects. Along with a hunting dog, the teams walk straight lines and as the dog’s flush birds out of the tall grass or from underneath thick vegetation, the species of bird, its size, its sex and GPS location is recorded.

Dr. Randy Larsen is a wildlife biology professor at Brigham Young University in Utah and he volunteered to join the project at Sproat’s invitation. He said from a research stand-point doing game bird surveys in this manner is a good design and will give managers a good sense of populations and health trends over time as surveys are repeated over several years. The plan is to do this twice a year on Maunakea and then to introduce this sampling method in game bird hunting areas across the state. Larsen’s impressions of game bird status on Maunakea included, “It’s a wonderful resource here. Lots of diversity of species. We’ve seen in the last couple of days that Don and I have done surveys everything from turkeys, to Erckel’s francolins, to California quail and there are other species that other teams have seen that we haven’t. Lots of diversity and pretty good densities relative to what I’ve experienced in the western part of the mainland.”

Larsen’s survey teammate is Don Fujimoto from Waikaloa. He’s been bird hunting on Maunakea for the past four years and he calls it a “great resource that DLNR manages.” On their third day navigating the sometimes steep, often rugged terrain Fujimoto observed, “It’s interesting and a little difficult at times because we’re supposed to run straight lines and sometimes the lines run across gullies. You know I don’t like gullies, they can be really dangerous. We’re also in some heavily vegetated areas where we have to get off the line a bit.”

Fujimoto said for him the bird numbers have been a little bit disappointing, but reiterates what Larsen said, that compared to Utah and other western states, “these are great numbers.” He also explained that for many local families game bird hunting is not just sport but puts food on the table. “The whole wildlife situation here allows for, not pure subsistence living, but there are a lot of people who get their food from the wildlife here,” Fujimoto said.

The next round of game bird surveys on Maunakea will happen after hunting season in February or March of next year. The survey design was created in cooperation with Dr. Javier Cotin and other researchers at the University of Hawai‘i at Manoa.

Dr. Shaya Honarvar, the Game Program Coordinator for DLNR/DOFAW concluded, “These datasets will help us tell a cohesive story about our game bird populations and how they’re doing. Involving the hunters, who actually use these resources, is a win-win, as they know the birds and the terrain and this gives them a real voice in how these lands are managed for hunting as recreation and for subsistence living.”