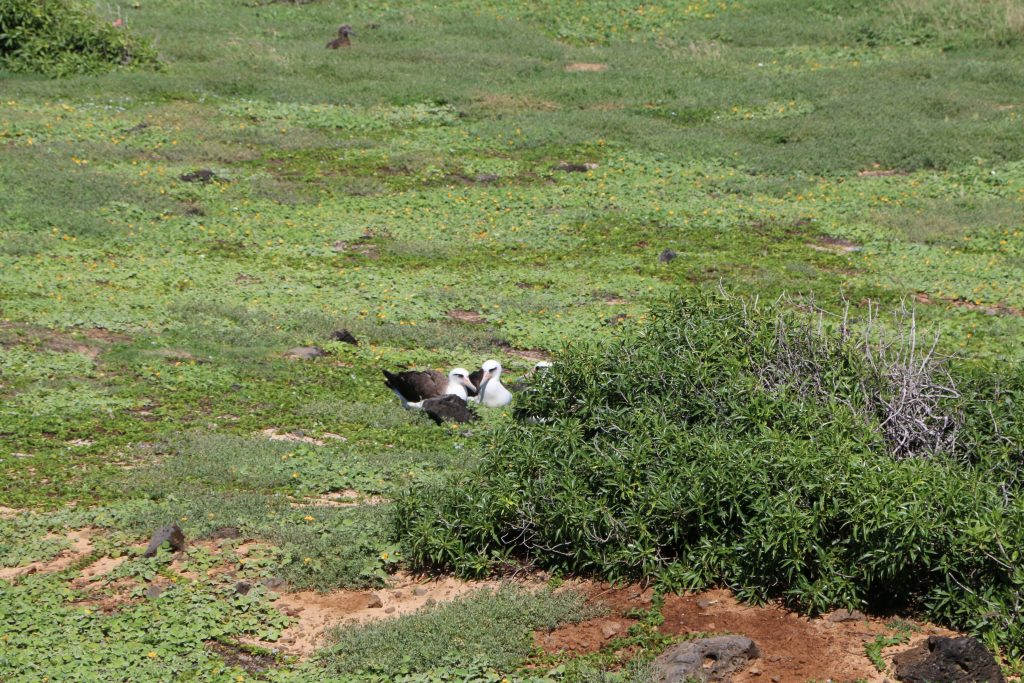 (Honolulu) – Albatross numbers at Kaʻena Point Natural Area Reserve continue to climb to record highs after being protected in 2011 by a predator-proof fence. In the 2018 season, 106 albatross pairs attempted to breed, and the number of wedge-tailed shearwater chicks have more than tripled in the last seven years.

Kaʻena Point NAR lies on the westernmost tip of Oʻahu, and is one of the few intact, native dune and coastal strand ecosystems in the main Hawaiian Islands. Before the fence was built, seabirds and native plant species were preyed upon by dogs, cats, mongoose, rats, and mice. Many of the seabirds that inhabit Kaʻena are ground-nesting, which makes them easy targets for predators. Cats also pose a threat to resting monk seals because they spread toxoplasmosis, a disease that can be lethal to marine mammals, as well as humans. The predator-proof fence encloses 59 acres.

Its success in helping increase seabird populations is largely due to the design of the fine mesh, modeled after technology used in coastal and forested areas of New Zealand. This type of fence was proven to be highly effective in keeping out small to large pests. The Ka‘ena Point installation is the first landscape-level fence of its kind to be utilized in the U.S. It includes a curved “hood” on top to prevent cats from jumping over it. Over time the hood has rusted due to sea spray and high winds and DLNR is now seeking funding to repair it.

The fence is one part of an ongoing effort to restore the point’s unique coastal ecosystem. In the 1990s, after decades of impacts from vehicles, predators and invasive plants, there were no nesting seabirds and very little native vegetation. DLNRʻs management interventions included restricting vehicle access, removing invasive weeds and predators, and planting native vegetation, resulting in enormous recovery. The fence has proven to be an effective and long-term solution to keep mammalian predators out, and serves as a model for other ecosystem protection projects worldwide.

Continued upkeep and maintenance of the Kaʻena predator-proof fence is supported by the U.S. Fish and Wildlife Service, Pacific Rim Conservation, DLNR’s Division of State Parks and the National Oceanic and Atmospheric Administration. Additional support for the fence and predator removal was provided by the David and Lucille Packard Foundation and Hawaiʻi Tourism.

Albatross began laying their eggs at the start of December and visitors who come in winter can watch the chicks developing into fully-fledged birds. The reserve is open to hiking and wildlife viewing, however it is illegal to bring in dogs, even on a leash, as they frighten nesting birds and have caused mass deaths of seabirds in the past. Visitors should stay on marked trails, properly dispose of trash, and observe wildlife respectfully, from a distance. In addition, everyone can help protect Hawaii’s native seabirds through responsible pet ownership: keep cats indoors, spayed and neutered, and never release cats into the wild.