Barriers and Signs Now Being Put in Place 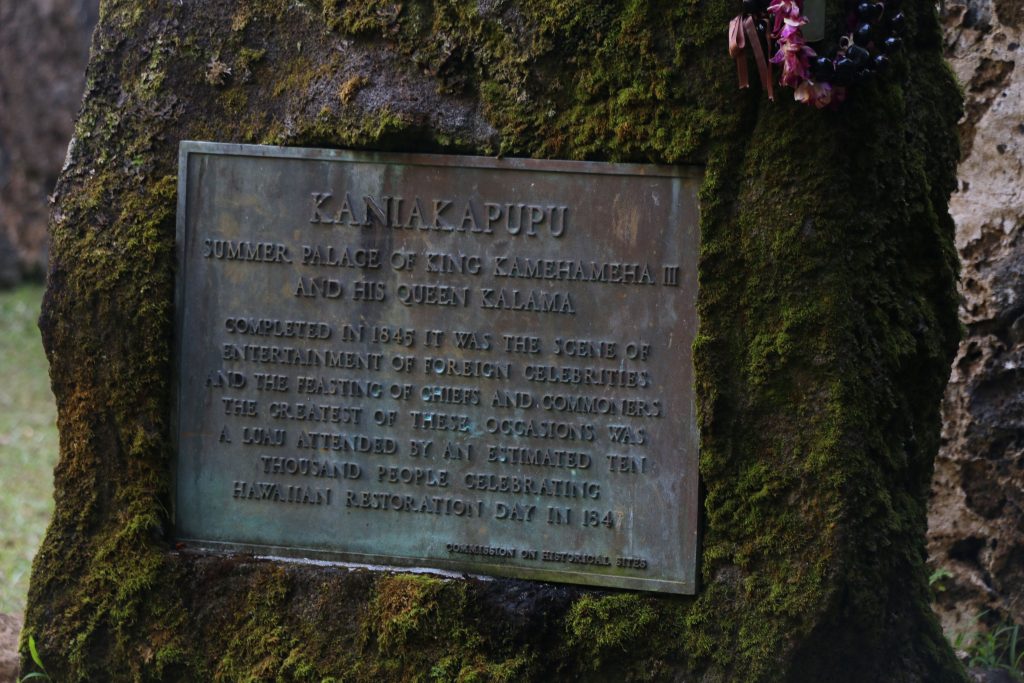 (Honolulu) – Around Valentine’s Day, vandals carved a heart-shape into a wall at Kaniakapūpū, King Kamehameha III’s summer palace.  Three-years ago vandals carved a series of crosses into another wall on the opposite side of the ruin’s entrance.

Kaniakapūpū, while promoted on some social media and tourism websites, has long been closed to visitation due to its cultural significance, as the second most important native Hawaiian structure on O‘ahu; second only to Iolani Palace.  Beginning in 1845 King Kamehameha III and Queen Kalama hosted visiting dignitaries and large parties at the summer palace, including a Hawaiian Restoration Day luau in 1847, said to be attended by ten thousand guests.

Ryan Keala Ishima Peralta, a forestry supervisor with the DLNR Division of Forestry and Wildlife expressed his emotions about past and the current vandalism, saying, “I’m sad, I’m angry, I’m disappointed.  While the vandal’s intentions perhaps were in their mind innocent, they are defacing an irreplaceable feature of our host culture’s history.  It’s hard to imagine what’s going through someone’s mind when they intentionally deface or destroy this important part of Hawai‘i’s legacy.”

With funding support from the Hawai‘i Tourism Authority, work crews are in the process of constructing a low-impact barrier of logs and plants around the perimeter of Kaniakapūpū.  Additionally, signs are being put up indicating that the area is closed and people should stay off the walls, rock piles and any features associated with the ruins. Other signs will explain the history of the area and detail why the ruins are kapu (off-limits).  Peralta explained, “We know people come up here, even though it’s closed, so we want to arm them with information to help them appreciate the cultural significance of Kaniakapūpū.”

In 2016, after vandals carved the series of crosses into the ruin’s walls, DLNR contacted numerous travel and tourism websites and bloggers who were promoting visitation to Kaniakapūpū, asking them to delete web references and directions to the ruins.  Many websites did drop references to the site, though additional items have now appeared on the web and DLNR is again contacting social media sites asking them to remove references to Kaniakapūpū.  As Peralta said, “In this case and many others, where we’re trying to protect sensitive cultural or natural sites, social media is not necessarily our friend.”