NEW RELOCATION PROJECT AIMS TO INCREASE HABITAT FOR THE KIWIKIU

Bringing a Native Forest & Its Native Songs Back to the Forest 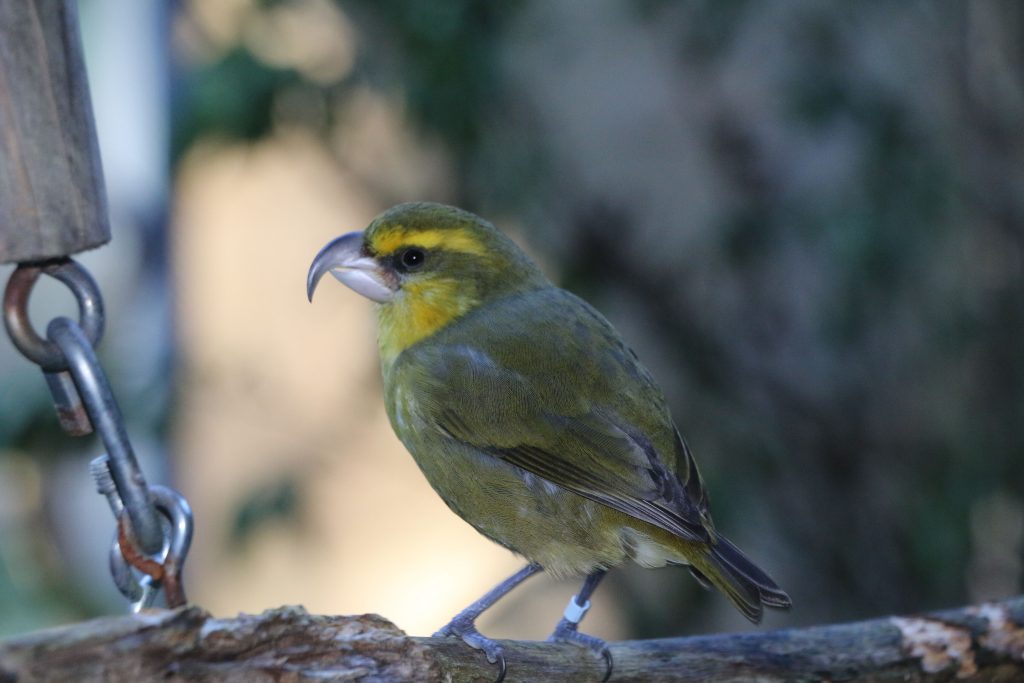 (Nakula Natural Area Reserve, Maui) – Considered the most threatened among Maui’s honeycreeper family, there are fewer than 300 Kiwikiu (Maui Parrotbill) left in the wild.  With its entire population restricted to high elevation, wet, rain forest on windward Maui, Kiwikiu are highly vulnerable to extinction and establishment of a second population on leeward Haleakala is considered by experts to be essential to Kiwikiu recovery. However, Kiwikiu need native forest habitat to survive and the leeward forests of Haleakala have been damaged by decades of grazing and browsing by feral ungulates (hooved animals).

To recover Kiwikiu, the Maui Forest Bird Recovery Project (a project of the Pacific Cooperative Studies Unit, University of Hawaii at Manoa) and the DLNR Division of Forestry and Wildlife (DOFAW) have been working with government and landowner partners to restore the native forests to the leeward slopes and are now preparing to release up to 20 birds this fall to begin the re-establishment of a second population in the Nakula Natural Area Reserve (NAR). Kiwikiu had been once found throughout leeward Haleakala.

Dr. Hanna Mounce is the Coordinator of the Maui Forest Bird Recovery Project and on a recent visit to the relocation site in the NAR, she eagerly shows off the tremendous amount of work underway to prepare this forest for the incoming Kiwikiu. Mounce explained, “The Kiwikiu population in the native forest on the windward side of Maui is being managed in every way possible. Fences are up to keep ungulates out but introduced predators and avian diseases are still a threat and as long as the entire population is restricted to one area the species will remain vulnerable to extinction. Without a second population, it is only a matter time before we lose this critically endangered species.”

While work continues to develop landscape-level tools to control disease and predator threats, re-establishment of a second population holds the best hope for the survival of this species.

The forest restoration project on-going in the NAR began with fencing and removal of ungulates and has now planted more than 250,000 native trees like koa and ohia; 19 different species in all. It is a part of a larger effort with the Leeward Haleakala Watershed Restoration Project. Dr. Fern Duvall, Native Ecosystems manager with Maui DOFAW said, “Once we removed the feral ungulates from the reserve and began planting native trees it also became clear that there is a diverse and viable seed bank in the soil and we are now seeing vigorous natural regeneration of native forest species”. The reforestation has been remarkable. Mounce said, “It actually really blew us away. The survival rate of these out-plantings far surpassed any of our expectations.” Teams of staff and volunteers spent months placing foot-high trees into the ground, developing new and better techniques along the way to ensure survival, which has resulted in healthy trees 20-30 feet tall now. Mounce added, “By enhancing natural regeneration with evolving planting and nurturing techniques, the forest is coming back a lot faster than we anticipated.”

Some of the birds will be moved from their current forest homes in east Maui.  Others were hatched and raised at the San Diego Zoo Global’s Maui Bird Conservation Center. When they’re moved it will be their first time out in the wild and teams are in high-gear preparing the birds and their new home for their arrival.

Utilizing some of the best practices developed for other successful reintroductions, the Kiwikiu relocation teams have built a series of platforms to hold small release aviaries, where the birds will spend time adjusting to their new surroundings before they’re released into the native forest. Once released, teams will carefully track and monitor their movements, feeding patterns, and behaviors to help inform and improve on possible future translocations.

The U.S. Fish and Wildlife Service (USFWS) 2006 Recovery Plan called for the creation of a second population of Kiwikiu. The recovery strategy centered on protection, restoration, and management of native high elevation forests on East Maui (Haleakalā), West Maui, and East Moloka’i. This includes ungulate monitoring and control, predator control, disease monitoring and control, captive propagation, and habitat restoration. According to the USFWS recovery plan, habitat restoration and re-establishment of a population on leeward East Maui is needed to promote natural demographic and evolutionary processes. This habitat is a mesic forest that appreciates lower annual rainfall forest than the habitat in the birds’ current range. Michelle Bogardus, Maui Nui & Hawaiʻi Island Team Manager, U.S. Fish and Wildlife Service said, “This first reintroduction is an important step toward recovery for Kiwikiu. Collaborative conservation efforts like this are the key to success in protecting and recovering Hawaii’s native species.”

Scott Fretz, DOFAW Maui Branch Manager and one of the co-authors of the 2006 Recovery Plan said, “We are really excited to begin this phase of the work to recover and I cannot emphasize enough the importance of the many partners that are working with us on this – communities, governments, landowners, non-profits, and volunteers.  If we are successful, and that’s still a big if, because new threats are always possible it will be because these partners have worked tirelessly to save the ecosystems on which the Kiwikiu depend.

The conservation translocation of the twenty Kiwikiu is expected to begin in October or early November.