Positive Results from Kamilo Point in the Ka‘ū Forest Reserve 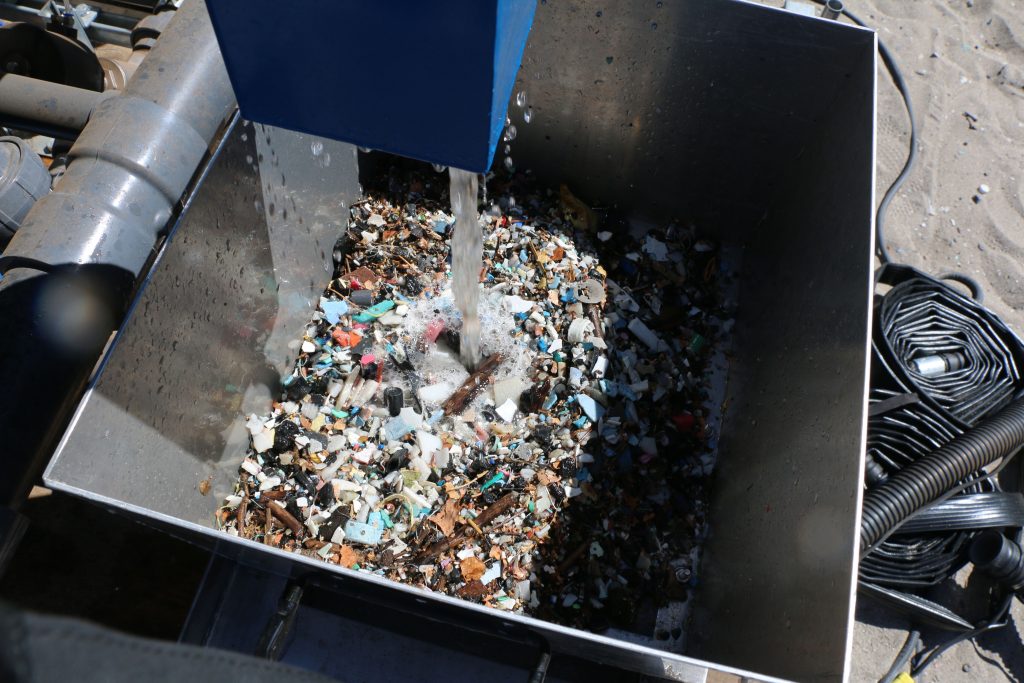 (Hilo) – One of the most rugged and hard-to-reach beaches in Hawai‘i has been infamously dubbed “plastic beach, trash beach and rubbish beach.” Not so long ago the strips of white sand at Kamilo Point on Hawai‘i Island were chest-high in plastic debris, off all sizes, shapes and variety; washed ashore by ocean currents. Over time it’s believed full 90% of the rubbish that ends up here is plastic, with most of it from the Great Pacific Garbage Patch, the swirling, growing accumulation of plastics floating in a giant gyre in the North Pacific.

“Ho’ōla One has arrived at Kamilo Point,” exclaimed Megan Lamson Leatherman, a marine biologist who splits her time between the Hawaii Wildlife Fund (HWF) and the DLNR Division of Aquatic Resources (DAR). Ho’ōla One is the name of a curious looking, mechanical contraption, shipped all the way from eastern Canada to Hawai‘i to test its ability to literally suck small bits of plastic, known as micro-plastics, from the coastal sands at Kamilo.  Developed as a class project by twelve mechanical engineering students at the University of Sherbrooke in Quebec, it’s hoped the giant vacuum cleaner will help keep this beach and others around the state, clean and plastics free. Lamson commented, “The potential application for this machine both in Hawai‘i and around the world can be huge. We’ve always kind of joked about having a marine debris plastic magnet and this is the closest and most innovative project that I’ve seen. I’ve got a lot of hope for this and I’m really stoked.”

Nine of the twelve students traveled with the Ho’ōla One to Hawai‘i. They raised more than $70,000 (Canadian) to design and build it and the HWF got donations to cover the $15,000 cost to bring it and its designers to Hawai‘i. During the last full week of April the students rotated duty watching over their creation during the night, and then by day they all worked together to  identify any design flaws, kinks and adjustments needed to get the Ho’ōla One operating as close to their design vision as possible.

Jean-Felix Tremblay, one of the students, explained that the project took two years from concept to build-out. “We spent thousands of hours, many nights and weekends working on the Ho’ōla One,” Tremblay explained.  He jokes their goal was not to get good grades but just to build a practical, working machine and that became their entire academic focus. Now, three of the students continue to work full-time on the Ho’ōla One project with the hopes of parlaying their efforts into a business venture where they downsize the machine and begin producing models that can be shipped around the globe to help address the issue of marine micro-plastics.

The concept for the Ho’ōla One originated with Alexandre Savard, who says he became obsessed with the issue of marine debris after viewing a whole bunch of films and videos. He said, “I just wanted to contribute to solving the problem and when I found out about Kamilo and its reputation as the most micro-plastics polluted beach in the world, I proposed to my fellow students, that if we can clean up this beach, we can clean up any beach anywhere.”

During construction of the machine the students did internet research to come up with its name. Ho’ōla One, means giving life back to the sand…a metaphor for restoring beaches to their natural conditions.

Marine plastic pollution is a threat to aquatic wildlife because they can ingest it and it can be a vector for the transmission of invasive species and diseases.  Brian Neilson, DAR Administrator said, “All of this rubbish is created by someone, somewhere. We can’t point the finger and blame a specific country or any one industry.  This is a global problem and we can all contribute to solving it by practicing the 4R’s (Refuse, Reduce, Reuse and Recycle).”

Steve Bergfeld, Hawai‘i Island Branch Manager for the DLNR Division of Forestry and Wildlife (DOFAW) pointed out, “The Hawai‘i Wildlife Fund and its many, many volunteers have done extraordinary work in bringing Kamilo Point, part of the Ka‘ū Forest Reserve, back from the brink of being totally covered by plastics and other marine debris. Unfortunately, it’s a never-ending challenge and I can’t tell you how appreciative we are of their work, as well as the efforts of the Ho’ōla One team.”

The university team is now analyzing the results of its Hawai‘i tests and indicate that after each day, with adjustments and alterations, the Ho’ōla One prototype, improved its performance. The machine is expected to remain in Hawai‘i where others will be trained to operate it. In Honolulu this week the students are meeting with numerous beach-clean up organizations as well as potential funders to secure the money needed to build additional machines.