Posted on May 31, 2019 in Forestry & Wildlife, slider
DEPARTMENT OF LAND AND NATURAL RESOURCES
News Release

DAMSELS IN DISTRESS GET HELP FROM STATE’S INVERTEBRATE PROGRAM

Reducing the Threat of Extinction 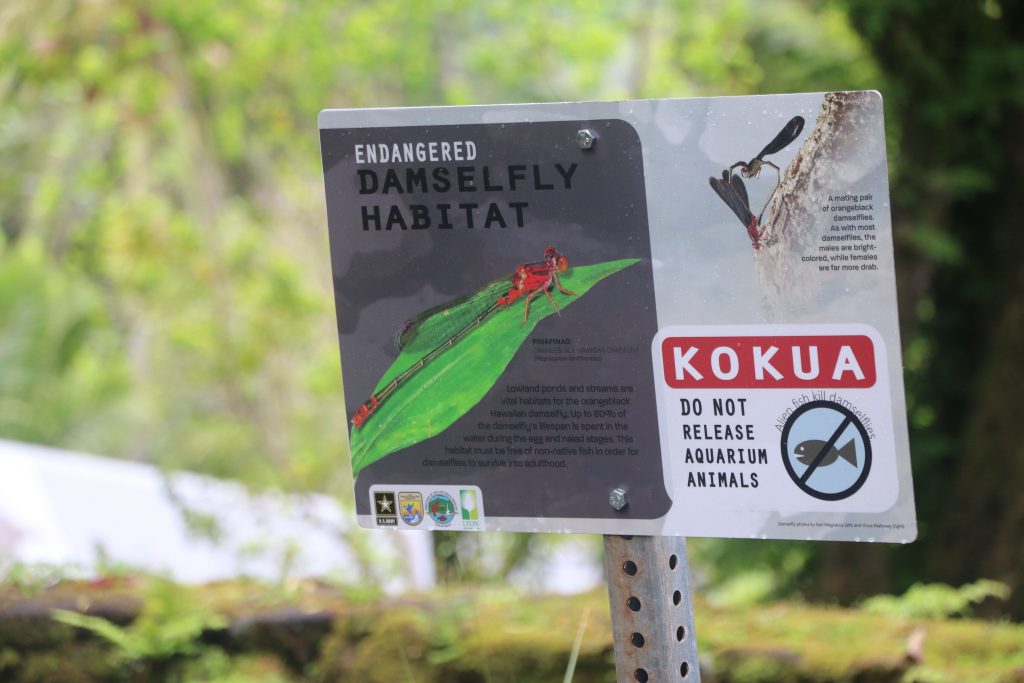 (Honolulu) – On a typical misty morning at the University of Hawai‘i’s Lyon Arboretum in the Manoa Valley, Dr. William Haines dips a net into a small pond.  Months prior, staff here drained the pond to remove invasive fish, then refilled it and stocked it with aquatic plants. A researcher with the DLNR Division of Forestry and Wildlife’s (DOFAW) Hawai‘i Invertebrate Program, Haines is now removing predatory dragonflies from the water before he introduces one of their cousins to the pond.

Damselflies are closely related to dragonflies but have smaller, more delicate bodies.  Six species are listed as endangered, including the orangeblack Hawaiian damselflies that are being released at Lyon and at other sites on O‘ahu in an effort to kick-start their population and prevent yet another extinction of a native Hawaiian insect.

Haines explained the process, “Our strategy began with collecting eggs from the only existing population of this species on O‘ahu at Tripler Army Medical Center in late 2018.  We then hatch the eggs out in our captive rearing facility in Kailua. They hatch into aquatic larvae called naiads, then we raise them up and release them about two months later (just prior to the adult stage) into a stream or ponds. We hope after they emerge as adults they stay around the release site and lay eggs to hopefully establish a population.” This painstaking work is being conducted in partnership with the University of Hawai’i, the U.S. Fish and Wildlife Service, and the U.S. Army’s Natural Resources Program on O‘ahu.

Damsels are in distress. Once abundant in Hawaiian stream and wetland environments pressure from agriculture, stream disturbances and introduced species has resulted in many species now becoming endangered.  Among their main threats are introduced fish species like the mosquito fish. As tough as their plight is, it’s equally challenging to gather reliable data on how they’re doing.  Haines said, “Insects are small and cryptic. They’re often camouflaged, and their behaviors can make them elusive. They often fly up into the canopy of trees so it’s really difficult to get absolute population counts.”

Each week since releasing the naiads into the pond at Lyon Arboretum, Haines returns to count the shed skins of naiads that have grown into adults and survey for damselflies returning to the pond to mate and lay eggs. As with many species reintroduction efforts they present a good news/bad news scenario.  On the negative side both damselflies and their cousins, the dragonflies, are predators as larvae and adults. With so much inter-species predation it can be tough re-establishing breeding populations. On the positive side damselflies and dragonflies help to control mosquitoes, midges and other insects that people think of as pests. Fortunately, after releasing around 300 naiads into the Lyon pond, adult damselflies have consistently been seen emerging, and have recently been seen mating and laying eggs at the Arboretum. He and his colleagues at the Hawai‘i Invertebrate Program will continue helping the distressed damselflies and other small creatures, as they play huge roles in our ecosystems including as food for native birds, pollinators of native plants and as recyclers of nutrients.

Haines concluded, “Hawaiian insects are really declining across the board.  We have an estimated 5,000 endemic insects and many are rare and listed as threatened or endangered.  The orangeblack damselflies are among a large number of insects that are at risk of extinction, so we’re trying to do everything possible to stabilize and increase their numbers in the wild.”

Cynthia King, DLNR State Entomologist said, “What is incredibly positive about this relocation is that we are seeing fit damselflies feeding, establishing territories, mating and laying eggs. I think this gives us a lot of valuable information to move forward with when we conduct releases at other sites in the near future.”