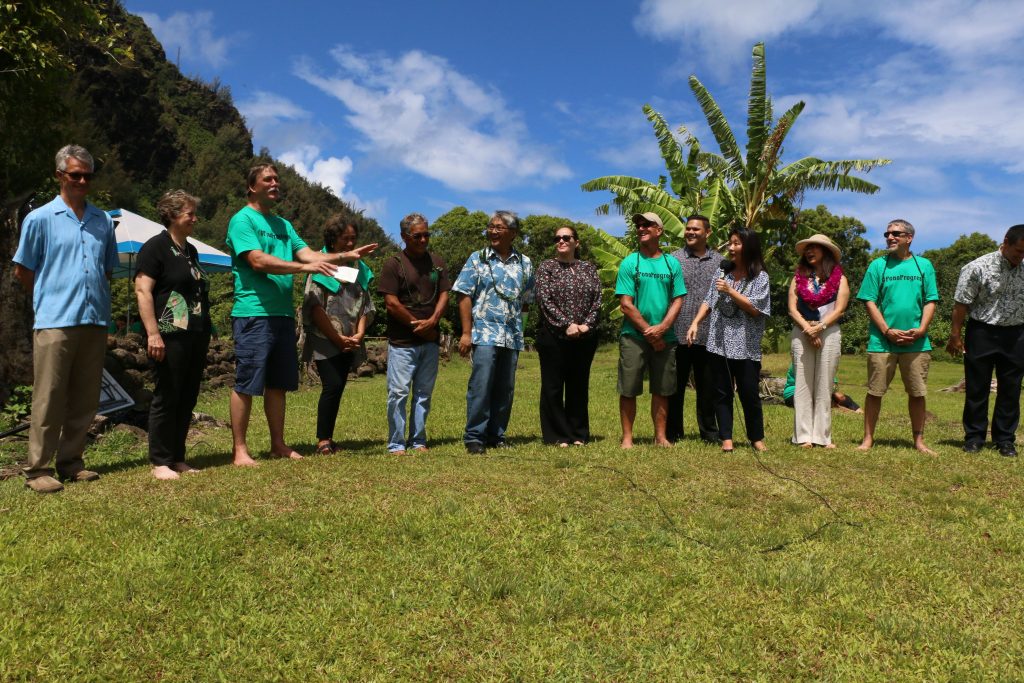 (Hāʻena, Kaua‘i) –The clouds broke, and the rain stopped as 200 Hāʻena and Wainiha residents gathered in Hāʻena State Park on Kaua‘i’s north shore on Wednesday for a blessing called “Dawning of a New Day for Hāʻena.” It was held next to an ancient loi system restored by the community group Hui Makaainana o Makana who have a curatorship agreement with the DLNR Division of State Parks. The blessing, which included remarks from Governor David Ige, DLNR Chair Suzanne Case, local community members and a host of lawmakers and state leaders precedes the reopening of Kūhiō Highway and Hāʻena State Park, the gateway to the famed Kalalau Trail in the Nāpali Coast State Wilderness Park.

The area was devastated during a historic April 2018 flood, which damaged hundreds of homes and brought tons of mud and debris onto Kūhiō Highway, the only route in and out of the region.  For more than a year, residents have endured road closures, scheduled convoys, and the daily disruption of their lives. Prior to the flood their lives were often disrupted by the thousands of people who visited the area each day to hike or enjoy Ke‘e Beach at the end of the road.

The blessing marks a new day for the community, as the DLNR Division of State Parks, Kaua‘i County and other organizations are implementing a long-planned effort to control the number of visitors to the area.  This includes a new reservation system for park entrance, a shuttle system to greatly reduce the number of vehicles traveling into the park, higher fines for people who park illegally, a new parking lot, and stepped-up enforcement. The intent is to reduce daily visitation to Hāʻena from an estimated 3,000 people each day to 900.

The blessing began with traditional Hawaiian protocols including a procession from Limahuli Garden & Preserve, which suffered significant damage in the flooding and has been closed since last April. Limahuli is part of the National Tropical Botanical Gardens (NTBG). Chipper Wichman, the long-time leader of NTBG as well as long-time Hāʻena resident, served as the master-of-ceremonies for the event. He recounted how the Hāʻena community has suffered for many decades from the crush of tourists who disrespect local property owners, clog the highway sometimes making it difficult for emergency vehicles to get by, leave rubbish behind, and damage coral reefs by walking on them or touching them.

The event included remarks from several young community leaders who traced their ancestral history to the land. In attendance were lawmakers, some of whom represent Kaua‘i in the State legislature or are members of key committees.

Rep. Sylvia Luke, chair of the House Committee on Finance, struck a common theme in her comments.  She said, “We must continue to find ways to balance tourism as the economic driver of the state with preserving the land and our natural resources. The destruction of our parks was overwhelming, caused by too many people in places at the same time.”

Gov. David Ige thanked the legislature for what he called the quickest action he’s ever seen in getting needed funding to a community in need. He also recognized the Hā‘ena/Wainiha community as a model for sustainable tourism and practices for rest of the state.  The Governor commented, “Hāʻena is home to the first Community-Based Subsistence Fishing Area in Hawai‘i, which provides a pathway for community management of ocean resources. Congratulations for being a model for the rest of Hawai‘i.”

DLNR Chair Suzanne Case told the crowd, “Our challenge is creating bridges between the old world and new world, between cultural and natural resources, between kama‘āina and visitors. It’s a lot of contradictions to hold, but today is reconciliation between an event that was so devastating and scary — and a new day.  That’s why we’re here.”

Ed Sniffen, the head of the Dept. of Transportations Highways Division said, “Since the April flooding I’d forgotten about the overwhelming beauty of this place.  In every trip here, all I saw was damage and debris.  Today was the first day I could look out the window and see the beauty of this community…a community that reminds me of what real strength is.”

The President and CEO of Hawai‘i Tourism, Chris Tatum, noted, “There’s a clear balance between the tourism industry and protecting the very natural and cultural resources that bring millions of people to Hawai‘i. We support the continued investment into the community, into the Hawaiian culture and into our natural resources.”

All the speakers recognized the overarching role the local community played in getting Hāʻena to its new day.  Without community leadership, no amount of government support would provide success. The blessing ended with everyone singing Hawai‘i Aloha.

Hāʻena State Park, the Nāpali Coast State Wilderness Park, and the Kalalau Trail will reopen in concert with the reopening of Kūhiō Highway.