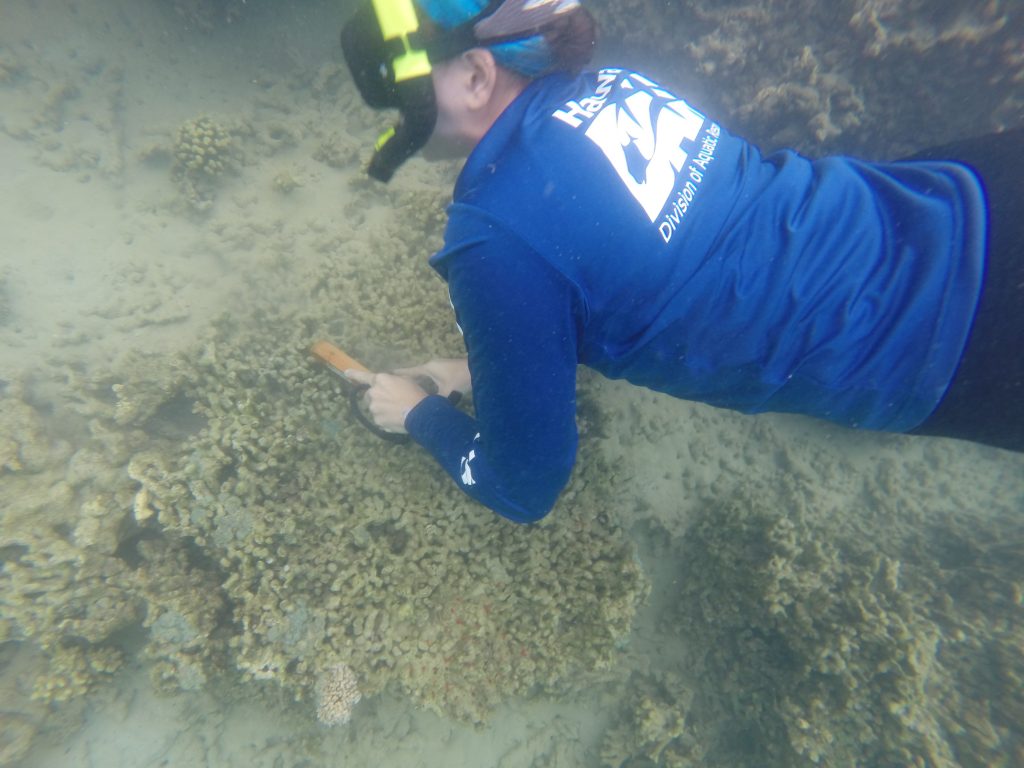 (Honolulu) – This morning a small team from the DLNR Division of Aquatic Resources (DAR) carefully ‘planted’ extremely rare, endemic Porites duerdeni coral onto a reef in Kaneohe Bay just off Coconut Island, home of the University of Hawai‘i’s, Hawai‘i Institute of Marine Biology.  This species of coral was likely wiped out during major bleaching events in 2015 and 2016 and previously was thought to grow in the bay as one of the few places in the world where it’s found.

Yesterday, the same team worked off the Reef Runway at Honolulu International Airport and placed three, 42-centimeter full coral modules on a damaged reef site. The species planted were the endemic Porites evermanni, the endemic Montipora patula, and Pavona varians.

All of the corals were raised in the state’s Ānuenue Coral Restoration Nursery on Sand Island. Coral ecologist David Gulko who leads the program, which raises rare corals for out-planting, said, “In Hawaii, each nursery-grown, 42-cm coral colony represents, on average, between 20-25 years-worth of growth, along with the accompanying services and functions corals provide in the ocean. Growing these modules in the nursery accelerates their growth four to five times faster compared to the same corals growing on their own in an ocean environment. This is particularly important in Hawaiian waters where corals are naturally slow growing.”

The out-plantings are part of an international, two-day recognition of World Oceans Day called Coralpalooza. Organized by the Coral Restoration Foundation in the Florida Keys, the event has spread from the Sunshine State to Hawai‘i and across the Caribbean. It’s billed as the largest active reef restoration in the world.

Last year, according to the foundation’s website, 480 people volunteered during the two-day event.  Divers planted 1,079 corals and monitored another 1,383 existing outplants. Across the globe coral reefs are under siege by rising sea temperatures, bleaching events, pollution, runoff, and damage from people. Worst case scenario has most coral reefs disappearing by the end of the century, despite the fact they’ve been around for 50 million years.

“Here in Hawai‘i, Gulko said, “most people understand the vital importance of corals to the health of the ocean. They provide habitat for fish and other aquatic life and reefs protect the land from ocean currents and storm events. They are the backbone of the planet and a critical part of the web of life.  Without coral reefs the ocean will cease to provide anything of value to people. That’s why it’s so important that we all do everything we can to protect our coral reefs.”

For today’s operation four DAR team members gently placed the coral modules on a ledge on a seawall, while they searched for a suitable location for their new home. They settled on a flat, dead coral structure, which was first cleaned with brushes and carefully documented and pinpointed by GPS. They next mixed up a goopy marine epoxy and applied some to the coral structure and some to the bottom of the rare corals. Next they firmly attached the pair of corals to the reef structure.

The Ānuenue Coral Restoration Nursery has been successfully raising rare and endemic corals for several years. Once modules are large enough, divers literally plant them onto damaged reefs with the hope they’ll spur additional growth. They’re given the best food, the best lighting, the best water conditions and lots of tender loving care; all in an effort to grow them at a fast rate. In the wild, Hawai‘i’s corals grow, on average, only one centimeter a year. Using 10-centimeter source fragments nursery staff grow 42-centimeter pyramid shaped modules in 8-10 months. During next year’s Coralpalooza event, it’s expected divers will check on the health of the coral colonies out-planted over the past two days.