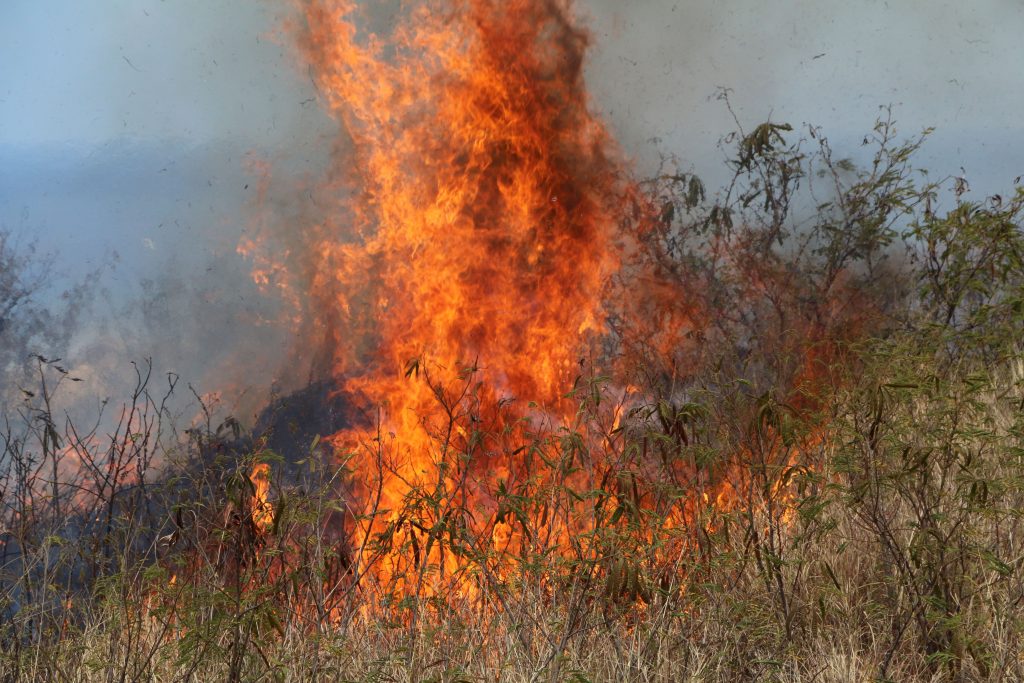 (Honolulu) – Don’t let last week’s heavy rains fool you and create a sense of complacency. All signs point to a busy time for wildland firefighters across the state, fueled by higher than normal temperatures, drought conditions, and abundant vegetation created by two successive rainy winter seasons.

Michael Walker, State Fire Forester for the DLNR Division of Forestry and Wildlife (DOFAW), repeated a common refrain, “Like everywhere else in the west, Hawai‘i does not have a specific fire season.  It used to be we geared up for battling wildland fires in late summer and early fall, as those times historically were the most common times for big fires. Driven by our changing, warming climate, fire season here in the islands, like in all western states on the mainland, is now year around.”

The retired chief of the California Department of Forestry and Fire Protection (CalFire) confirmed this during a presentation in Honolulu last week.  Ken Pimlott recounted the 2018 fire season as the most destructive and deadly in California history, with more than 1.8 million acres burned, 22,000 structures destroyed, and 100 lives lost.  While Hawai‘i‘s wildland fire statistics are unlikely to ever reach California’s levels, as a percentage of land mass impacted by wildfire annually, Hawai‘i is no different than much larger states.

More evidence of a year-around fire season was provided by a 2,150 acre fire that burned on Agribusiness Development Corporation land on west Kaua‘i in mid-June between the two highways leading to Waimea Canyon and Koke‘e State Parks.  Sheri S. Mann, DOFAW Kaua‘i Branch Chief said, “This fire burned in the exact same area as a wildland fire in May this year and May of 2017; it basically burns there almost every year. It suggests that as land and fire managers we need to consider shifting our thinking towards changing forest and grassland management regimes.” Mann suggests that rather than putting out fires in the same places year after year, management needs to transition into identifying areas that burn repeatedly and then take steps to reduce the fuel types, loads and human activities to mitigate fire potential in advance.

Clay Trauernicht, a Wildland Fire Specialist with the University of Hawai‘i’s Cooperative Extension Service traces how the potential for wildland fire has steadily grown over the years. He explained, “”Agriculture and ranching declines have left us with about one million acres of non-native grasses and shrubs statewide. This vegetation is incredibly prone to burning during drought. Clearing and cleaning up the brush on your property is critical for the safety of your family, home, and our firefighters.  On top of this, we have some of the highest frequencies of fire starts in the US.  About 75% of those ignitions are accidental, which means they can be prevented.  So take care with campfires, BBQs, using machinery and running cars over and around dry grass.  We also see big spikes in wildfires around the holidays so please follow the laws and be especially safe around fireworks this upcoming Independence Day.”

While last week’s rains may have provided some temporary relief from drought conditions in certain areas across the state, meteorologists predict a possible steady worsening of extraordinarily dry weather caused by moderate El Niño weather patterns. The United States Drought Monitor (June 27, 2019) shows extreme drought already impacting the southernmost part of Hawai‘i Island with moderate to severe drought conditions evident in certain areas on all of the main Hawaiian Islands.  The Drought Monitor reports, “On June 25, an unusual low pressure system for this time of year brought heavy rainfall to the western Hawaiian Islands, including a daily record of 4.20 inches at Honolulu. The effects of this heavy rainfall on the drought status in Hawaii will be reassessed later this week.”

Derek Wroe, a meteorologist at NOAA’s National Weather Service Honolulu Forecast Office explained, “People should not be lulled into thinking that recent rainfall over some islands will eliminate drought conditions over the entire state. With our hotter and drier months still ahead, current drought conditions have the potential to become more pronounced over portions of the state.”

Elizabeth Pickett, the head of the Hawai‘i Wildfire Management Organization (HWMO) said what’s most important is what happens before a wildfire sparks. She explained, “Firefighting is the last line of defense when it comes to wildfire.  It is up to everyone, residents and visitors alike, to prevent wildfire by eliminating any chance for heat or sparks to come in contact with dry vegetation. There is also a lot that can be done around your home and community to reduce wildfire’s ability to spread and cause widespread damage. It can be as simple as keeping your grass short, removing dead branches and leaves, and clearing your rain gutters of debris. Finally, make and practice your emergency plan with your family, and with any neighbors who might need help preparing for or evacuating from a wildfire.”

HWMO hosts a website with information on what home and property owners can do to “harden” their properties against the threat of wildfire.