11/7/19 – Orange On Orange: As Trapped Dog Is Brought To Daylight; DLNR/DOFAW Botantist To The Rescue 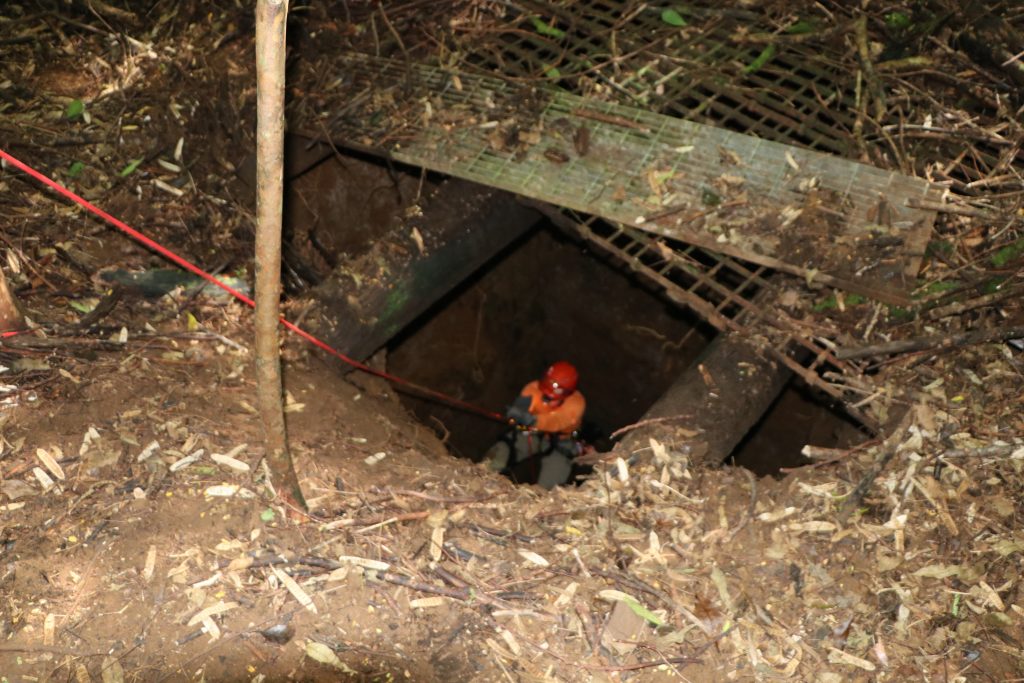 ORANGE ON ORANGE: AS TRAPPED DOG IS BROUGHT TO DAYLIGHT
DLNR/DOFAW BOTANTIST TO THE RESCUE

(Lihu‘e-Koloa Forest Reserve, Kaua‘i) – When botanist Adam Williams put on his orange t-shirt this morning he knew he’d be rappelling. As a certified arborist with the DLNR Division of Forestry and Wildlife (DOFAW), Williams is accustomed to climbing trees and down cliffs in search of rare plants.

Adam was enlisted to rappel into an 81-foot deep hole in the Koloa section of the Lihu‘e-Koloa Forest Reserve. This is where orange comes into play. The orange-clad Williams prepares to lower himself into the dark, dank hole to rescue a dog, named Orange.

A one-year-old Catahoula hunting dog, Orange fell into the pit last Saturday. Fortunately, his owner, Tarvan Orsatelli, had a GPS tracker on him and was able to locate him quickly. Over the past five days Orsatelli, friends and family members lowered food and water into the hole, while trying to figure out how to extract him. They knew Orange was alive due to the occasional whimpers or howls they’d hear from him.

It’s believed the vertical, tubular-shaped cavern is part of an old water irrigation system. Initially the Kaua‘i Fire Dept was called to help, but with ladders only 25-feet long that rescue plan was quickly scraped. This is when Williams and his boss, DOFAW Kaua‘i Branch Manager Sheri S. Mann entered the picture. Since the hole is on DOFAW land, Mann and her team began thinking about what they could do to help?

This morning after Mann and Williams surveyed the scene it was decided it would be safe to send Williams, an experienced climber, into the hole to rescue Orange. With a half dozen people watching from above, Williams rigged his climbing gear, tied off to a stout Guava tree and began lowering himself down. For safety, he carried a radio and air monitoring device to the bottom with him.

Within a few minutes Adam stepped onto the bottom and found a pooch very excited to see him. He said, “He was really happy to see me, after he got over the shock of being down in a hole for a week.” Williams bundled Orange into a small canvas bag and a couple of men up top began slowly pulling him to safety.  Adam says he could see him kicking the sides of the duffel but once on top, Orange quickly exited the bag, shook himself off and seemed a little perplexed by the small crowd on hand to witness his return to terra firma.

Orsatelli says Orange has a few scrapes, clearly lost some weight during his ordeal, but was not much worse for the wear after tumbling into the 81-foot shaft.

Animal control officer Kewehi Harris of the Kaua‘i Humane Society was on hand to take Orange in to be checked by a veterinarian. Like all who witnessed today’s rescue she was impressed with the dogs relatively good condition.

For Williams it was a departure from a regular workday, though most people don’t consider going up and down ropes on sheer cliffs or towering trees part of their normal day. Orsatelli says Orange is shaping up to be one of his best hunting dogs and now he has a special place in his heart for him – along with Adam and the others who helped in this successful and heartwarming rescue of a little dog, named Orange.