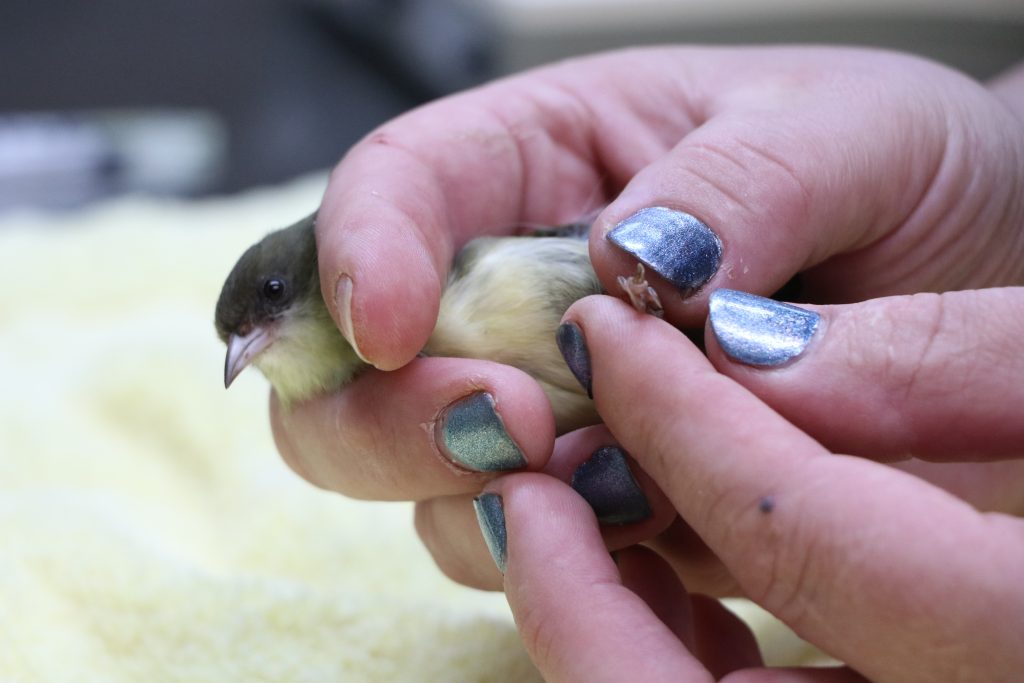 (LIHUE) – This morning a critically endangered ‘akikiki received VIP treatment with a helicopter ride from a valley deep in the Alaka‘i Plateau to safety at the Maui Bird Conservation Center (MBCC).

Named Carrot, for its orange leg band, the ‘akikiki is the father of a chick, Erica, brought into human care last December. For the past ten days a field team of five set up mist nets and used sound attraction to try and draw Carrot and another bird, its offspring, in. They’re believed to be the last remaining ‘akikiki in an area called Halehaha. While the team spotted Carrots offspring named Abby (though it’s believed to be a male), they were unable to catch it.

Dr. Lisa “Cali” Crampton leads the Kauai Forest Bird Recovery Project (KFBRP). Asked if bringing one bird out of its wild habitat to protect it from deadly avian malaria was a success she said, “Absolutely! Even when these birds were more abundant they were hard to catch, especially at this time of year when they are not breeding so not actively defending territories and responding to playback. So kudos to the team for getting one of the two males we targeted.”

‘Akikiki, a native honeycreeper, only found on Kauai, have experienced a perilous decline as malaria-carrying mosquitos have moved into their territory, killing them one by one.

Crampton said, “It’s also important to note that with only 40 birds left in the wild, every bird that we can bring safely into captivity to protect them from avian malaria will give the species, a better chance of not going extinct. Carrot is particularly important because he has a proven track record of breeding, so hopefully he can teach some valuable behaviors to ‘akikiki born in captivity.”

The field team comprised of KFBRP staff Justin Hite and Tyler Winter, along with Sonia Vallochia from the Maui Forest Bird Project Recovery Project, Cara Thow from the DLNR/PCSU Hawai‘i Island avian disease program, and bird care expert Peter Luscomb captured Carrot in the very last hours of their week and a half long search and rescue mission.

Right after dawn, pilot Chris Currier of Airborne Aviation landed at the field camp to pick up the bird, housed overnight and for the helicopter trip to Maui, in a specially designed box. Currier said it was a real honor to be part of the effort to try and save ‘akikiki from extinction in the wild.

At Maui’s Kahului Airport Jennifer Pribble and Brenden Scott with MBCC, operated by the San Diego Zoo Wildlife Alliance (SDZWA), walked out to meet Currier the courier, and drive Carrot to their Olinda facility. He becomes the 37th ‘akikiki in safety there, where they’ll remain, while a large collection of agencies and organizations grapple with plans to introduce incompatible male mosquitoes into critical forest bird habitats to suppress mosquito populations and try and set-back the extinction clock

At MBBC, Carrot was given fluids, food, and antiviral medication. He got a thorough check-up before going into quarantine for the next 30 days.

How have Carrot, Erica, and Abby survived when all the other Halehaha ‘akikiki have disappeared? Crampton said, “It might partly be luck of the draw, like why some people have still evaded COVID despite how widespread it has become. It might be that their territory, which encompasses a couple of ridges, gets a little more wind and thus has fewer mosquitoes?  Or it may be that they have had avian malaria but were lucky enough to get a mild dose and survived.”

Carrots rescue is great news but tempered by the knowledge that there’s a good chance the species will be extinct in the wild within a year, before other birds can be rescued.

“We are very excited and humbled to have the opportunity to save the last few ‘akikiki from near certain death in the wild and prevent the complete extinction of the species. This decision was not easy to take; when possible we prefer to leave species in the wild. But the disappearance of the Halehaha population, which used to be the most numerous one, does not bode well for the remaining birds, and so at this point, the best course of action is to protect them in captivity until mosquitoes and avian malaria are controlled on the landscape over the next few years. After the threat of disease is mitigated, we plan to release ‘akikiki back into the wild. So, this is a temporary situation,” Crampton explained.

Next spring a partnership of the KFBRP, SDZWA, the U.S. Fish and Wildlife Service, the DLNR Division of Forestry and Wildlife, Pacific Bird Conservation, and other partners hope to mount a mass ‘akikiki search and rescue mission to bring the last wild birds and their eggs to safety.

Crampton reflected, “This is an exciting moment, because we achieved our goal, but also a very somber moment. I lay awake last night thinking about Abby, the remaining ‘akikiki at Halehaha, wondering what would happen to it, whether we would see it again, whether we’ll have another opportunity to try to catch it., trying to imagine Halehaha without ‘akikiki.”